The name refers to an elegant and beautiful pair of natural pearl and diamond art deco pendant earrings that appeared at the Christie's "Jewels: The Geneva Sale," held at the Geneva Four Seasons Hotel des Bergues, on May 12, 2010. The lot made a significant impact at the auctions by registering an enhanced price of CHF 183,000 (US$ 165,176), which was above the upper pre-sale estimate by over US$ 20,000, a clear indication of the recovery of the strong auction market for antique natural pearl jewelry, after the recent worldwide global recession. 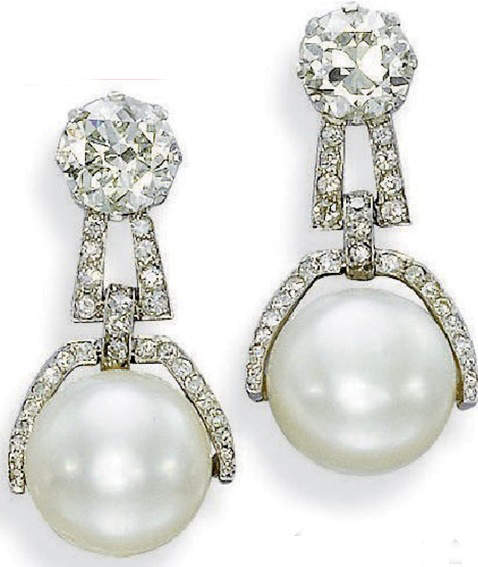 Design features of the pendant earrings

The pair of natural pearl and diamond pendant earrings designed around the year 1925, during the Art Deco period, consists of two halves, an upper fixed half with provision for mounting on the earlobe and a wedge-shaped loop and a lower movable half suspended from this loop. The large button-shaped pearl forms the centerpiece of the suspended half. The pearl is suspended by a semicircular shaped surmount which appears to be fixed to the pearl by the drill holes on either side, in the center. The surmount made of platinum is pave-set with small old-cut diamonds. The wedge-shaped loop from which the pearl-carrying surmount is suspended, is also pave set with small diamonds. A large circular-cut diamond, a modern brilliant-cut with a large table, is mounted at the top of the fixed half of the earring, from which the loop arises. The entire length of the earrings from the diamond at the top to the bottom of the pearl is 3.4 cm.

Features of the two pearls in the pendant earrings

Are the pearls incorporated in the pair of earrings actually button-shaped pearls ?

Thus, the variation in diameter of one pearl = 15%

Variation in diameter of the other pearl

By definition, if the variation in diameter is between 0% to 2% - the pearl is spherical.

If the variation in diameter is between 2% to 20% - the pearl is near-spherical.

If the variation in diameter is greater than 20% - the pearl is button-shaped.

The two pearls incorporated in the earrings have a variation in diameter of 15% and 18%. Thus, according to the definition given above, they fall under near-spherical pearls, whose range is between 2% to 20%.

The weight of the pearls ?

The dimensions of the two pearls are given but not their weight. However, we can make a rough estimate of their weight, using Kunz and Stevenson's conversion table given in Chapter IV of their book, "The Book of the pearl" in which the weight of spherical pearls are related to the diameter in millimeters. Thus, making the assumption that the pearls are spherical and have diameters 13.50 and 13.30 respectively, we find that they have a weight of approximately 60-70 grains each. Please go to our webpage on the Nine-Strand Natural Pearl Festoon Necklace for the table.

The color of the pearls

The color of the pearls is silvery-white, in which white is the body color of the pearls and silver, the overtone color. White is the most sought-after color in pearls, and caused by the absence of any colored pigments, which are usually combined with the conchiolin component of nacre. In the absence of colored pigments in the conchiolin, the white color of aragonite shows through. Thus, the color of white pearls is actually the color of aragonite, a crystalline form of calcium carbonate. The silver overtone color is caused by the refraction of light when it passes through successive layers of aragonite and conchiolin.

The luster and orient of the pearls

The luster and orient of the pearls are in keeping with their saltwater origins. Both are optical properties dependant on the thickness of the nacre. The two pearls being natural pearls are made entirely of nacre, and thus, both luster and orient are at an optimum level for these pearls. Whereas luster is caused by the reflection of light from the surface and just below the surface of the pearl, orient is caused by the refraction and scattering of light as it passes through successive layers of nacre.

Surface quality of the pearls

The surface quality of the pearls is also exceptional and appear to be entirely blemish-free, a quality that enhances other optical properties of the pearls, such as luster and orient.

It is a combination of all these desirable characteristics such as the white color, the silver overtone, the exceptional surface quality, and brilliant luster and orient, that enhanced the value of these natural pearls at the auctions, despite the absence of a clear-cut historic provenance for the piece of jewelry.

Given the size of the pearls, 13.25 mm to 13.50 mm, the silvery-white color, and the extraordinary luster and brilliance, what comes to one's mind immediately, are the South Sea pearls, which have all these characters, such as the large size, the silvery-white color and exceptional luster and brilliance. The range in size of South Sea pearls is from around 9 mm to 20 mm, and the size of 13.25-13.50 mm falls within this range. Silvery-white is a common color of pearls produced by the South Sea pearl oyster, Pinctada maxima (Silver-lipped pearl oyster). Other colors produced by the silver-lipped oyster are silver, silvery-pink and cream. South Sea pearls are also famous for their luxurious satin-like luster, which surpasses the luster of all other pearls. Thus, the natural saltwater pearls incorporated in these pendant earrings are most probably natural South Sea pearls, harvested from the oyster species Pinctada maxima.

Was Broome in northwestern Australia the source of the pearls ?

Given the period in which the pendant earrings was designed, as around 1925, the most probable source of the pearls were the pearl banks off the coast of Western, and Northwestern Australia. Around this time, Broome in Northwestern Australia had acquired international fame as the World's largest producer of mother-of-pearls, based on the South Sea pearl oyster, Pinctada maxima. The occasional South Sea pearls harvested were a by-product of this booming industry. In 1925, the population of Broome had reached 5,000, with over 400 pearling luggers engaged in the pearling industry, producing almost 80% of the world's requirement of mother-of-pearls. In all probability the natural saltwater pearls mounted on these earrings originated during this period in Broome, Northwestern Australia.

Alternative source of the pearls

Apart from Pinctada maxima, was it possible for the pearls to have originated in another species of Pinctada such as Pinctada radiata, the Gulf pearl oyster, also known as the Ceylon pearl oyster ? This species was renowned for the production of seed pearls, less than 2 mm in size and 0.25 grains in weight. However, Pinctada radiata also produced medium sized pearls varying in size from around 3 mm to 8 mm. The pearl oyster also produced occasional pearls greater than 8 mm in size, but were extremely rare. Thus, the prospect that Pinctada radiata produced these pearls was a possibility, but the chances were remote, given the extreme rarity of the occurrence. However, given the enormous volume of production several large pearls were also produced annually by Pinctada radiata. Thus, in spite of the rarity of occurrence of large pearls produced by Pinctada radiata, there still existed a slight possibility that the pearls could have originated in them. Features such as the silvery-white color, is common to both South Sea pearls and Oriental pearls. Apart from that the period around the 1920s was a period when the Persian Gulf was still in active production, but the pearl fishery of the Gulf of Mannar had already been abandoned. Thus, if at all the pearls  are Oriental in origin, they probably originated from the Persian Gulf, the most ancient source of pearls in the world.

1) The use of platinum as a metal in the pair of earrings. Platinum first became popular in jewelry during the Edwardian period from 1901- 1920, and the trend continued after that.

2) Again the use of white on white scheme, such as pearls and diamonds on platinum metal, was a carry over from the previous period, the Edwardian period, when such scheme became very popular.

3) Long earrings like pendant earrings were a popular feature of the Art Deco period.

4) The design features of the pendant earrings emphasizing straight lines and angles over curves, was a distinct feature of the Art Deco period. Such straight lines and angles can be seen on the wedge-shaped loop, as well as on the semi-circular shaped surmount that suspends the pearls. In fact, closer examination of the earrings show, what appears as a semi-circle is actually an arch made up of five distinct straight lines. Thus, the supporting arch is in fact similar to a part of a polygon and not part of a circle.

5) The use of a large modern brilliant-cut diamond mounted at the top of each earring, a cut that was first introduced in 1919 by Gabi Tolkowsky.

The Pair of Art Deco Pearl and Diamond Earrings fetch an enhanced price of US$ 165,176 at the auctions

The pair of pendant earrings that was characterized as "A Pair of Elegant Art Deco Pearl And Diamond Earrings" was allocated Lot No.142, at the Christie's Jewels : The Geneva Sale, held on May 12, 2010. The lot was accompanied by report no.53629, dated March 31, 2009 issued by the Swiss Gemstone Research Foundation (SSEF), certifying that the two pearls incorporated in the earrings were natural saltwater pearls. A pre-sale estimate of CHF110,000-160,000 (USD 99,268-144,390) was placed on the lot. But, the lot performed better than all expectations, at the auctions, fetching an enhanced price of CHF 183,000 (USD 165,176), which was CHF 23,000 (USD 20,786) more than the upper pre-sale estimate. As pointed out earlier, the natural credentials of the pearls combined with a host of desirable characteristics was responsible for the enhanced price realized, with possibly the Art Deco origins of the piece, also playing a significant part. The price realized was consistent with the prices obtained for such pieces at other public auctions, as shown in the table.