A Pair of Natural Pearl  Earrings with a Circular Design 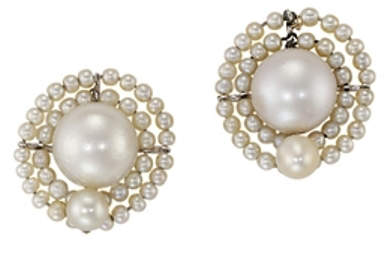 Pair of natural pearl earrings with a circular design

Characteristics of the pair of natural pearl earrings

The circular design of the pair of earrings

Each earring has a circular design, with a central, prominent, button-shaped pearl, surrounded by two rows of beaded smaller pearls. A second large spherical pearl, smaller than the central spherical pearl is placed just below it. The metal wires used to support the pearls in the earring appear to be made of silver or platinum. The whole framework of the earring appears to be supported by two main cross wires, one vertical and the other horizontal. The central button-shaped pearl appears to be resting on these cross wires. The two rows of beaded pearls are strung together by wires which are also fixed to the cross wires. The second large spherical pearl is placed over the rows of smaller pearls just below the central pearl and in line with the vertical cross wire.

Are the central large pearls in the earrings actually button-shaped ?

In each of these button-shaped pearls we can determine the variation in diameter, and verify whether they are actually button-shaped.

1) Calculating the variation in diameter of the pearl weighing 49.24 grains

Variation in diameter of perfectly spherical pearls = 0% to 2%

Variation in diameter of near-spherical pearls = 3% to 19%

Variation in diameter of button-shaped pearls > 20%

Thus the pearl weighing 49.24 grains, with a variation in diameter of 8%, is actually a near-spherical pearl, even though it is described as a button pearl.

2) Calculating the variation in diameter of the pearl weighing 45.40 grains

Thus the pearl weighing 45.40 grains, with a variation in diameter of 11%, is also a near-spherical pearl, even though it is also described as a button pearl.

The shape of the smaller beaded pearls

The small beaded pearls surrounding the central pearl have assorted shapes, but most of them appear to be button-shaped. There are also spherical, near-spherical, and oval-shaped  pearls among them.

The most striking feature of the pearls on the earrings, is the similarity in color of all the pearls incorporated in them. The pearls are white with a slightly pinkish overtone. White is the body color of the pearls and pink the overtone color. The luster and orient of the pearls, caused respectively by reflection and refraction of light, are also exceptional, in keeping with their saltwater origins, imparting a spectacular overall beauty to the pair of earrings.

History of the pair of natural pearl earrings

The possible oyster species in which the pearls originated

Nothing is known of the historical provenance of the circular pair of natural pearl earrings. However, the pinkish-white color and the range in size of the pearls seem to suggest that they originated in the prolific pearl oyster species Pinctada radiata, the species around which the international pearl industry was based since very ancient times. White and yellow are common body colors of pearls produced by this species, and pink, silver and cream are common overtone colors produced. Pearls produced are usually medium sized varying from 2 mm to 10 mm. Quite a lot of seed pearls were also produced by this species, apart from the occasional large pearls greater than 10 mm in size. Pearls of both regular and irregular (baroque) shapes were produced. Among the regular shapes produced, were spherical, near-spherical, button, oval, and drop shapes. However, baroque shapes were more common than regular shapes.

The possible source of the pearls

The pair of natural pearl earrings, was accompanied by a laboratory report, bearing No.49188, dated August 15, 2007, issued by the Swiss Gemological Institute, indicating that the four larger pearls in the pair of earrings were natural saltwater pearls.