The name refers to an exquisitely crafted pearl and diamond brooch or corsage ornament, designed as a spray of orchids consisting of open flowers, flower buds and leaves, and believed to have originated in the latter part of the 19th-century around the year 1880, and belonging to a family of Spanish dukes. The brooch was one of eight lots belonging to the same ducal family that came up for auctions at the Sotheby's "Magnificent Jewels and Noble Jewels" sale, held in Geneva, on Tuesday, May 11, 2010, and registered a hammer price of 35,000 CHF, which was almost three times the lower pre-sale estimate and twice the upper pre-sale estimate. 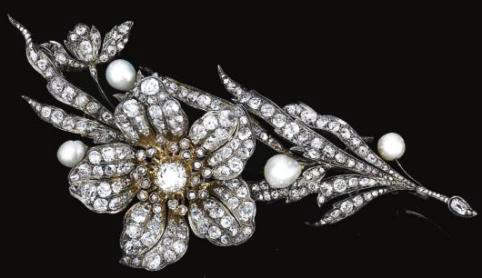 Characteristics of the  Pearl and Diamond Brooch

Design features of the brooch

The design of this brooch is based on a recurrent historic theme that used plant and animal motifs in jewelry designs, that began with the ancient Egyptians and Greeks, and reaching a climax during the Art Nouveau period towards the end of the 19th-century in the 1880s, and continuing well into the 20th-century. The plant motif used in this case is a spray of orchids, consisting of a stem, leaves, flowers and flower buds, and executed in silver and gold, using the ancient technique of filigree working, with silver plates and wires. The stem, leaves and perianth (petals and sepals) of the  orchid flowers are set with rows of rose-cut, single and circular-cut and cushion-shaped diamonds. Silver wires run along the borders of the leaves and perianth and are also used to represent the stalk of flowers and flower buds. There are four flower buds in the brooch, represented by four large, white, natural pearls, two of which are almost spherical and the other two somewhat drop-shaped, and mounted on silver wires. The centerpiece of this brooch is a single large orchid flower, with three segments in the outer perianth (sepals), and two in the inner perianth (petals). Each of the segments is mounted with four rows of diamonds. The modified third petal, known as the lip or labellum, and the central fused male and female organs known as the "column," usually found in a natural orchid flower, is not represented. The missing parts of the orchid flower is replaced by a flower head made of pink gold and silver, whose center appears to be occupied by another white spherical pearl, mounted en tremblant, and surrounded by several smaller rose-cut diamonds.

History of the Pearl and Diamond Brooch

Except for the fact that the pearl and diamond brooch was part of the collection of a Spanish ducal family that originated around 1880, nothing is known about the detailed historic provenance of the brooch. The period of origin of the brooch roughly corresponds with what is known as Art Nouveau period in Europe which extended from around 1880 to 1920. In the United Kingdom this period corresponds to two distinct periods known as the Late Victorian or Aesthetic period (1890-1901) and the Edwardian period (1901-1920).

Features of jewelry produced during the Art Nouveau period

Art Nouveau, that originated in France in the late 19th-century was an innovative style adopted for both fine arts and architecture, that was extended to the decorative arts including jewelry crafting. Art Nouveau, corresponds with the period of advances in Science and Technology in Europe, brought about by the Industrial Revolution. The jewelry motif of the Art Nouveau period included nude and semi-nude human female form, the female head with long flowing hair, sunbursts, crescents, natural motifs both animals and plants, inspired by the Darwinian controversy and new botanical discoveries. Animal motifs included insects such as butterflies, dragonflies, bees; birds such as swans ad peacocks; and reptiles such as snakes. Plant motifs included undulating vines, leaves, and flowers of poppies, orchids, irises and water lilies. Apart from gold, silver, and copper, which were often enameled to dramatize a design, other materials used in jewelry crafting included horn, tortoise shell, ivory, mother-of-pearl shells, crystal and carved glass. Apart from diamonds and pearls, other gemstones that were popular during this period, included opal, moonstones, chalcedony, peridot, amethyst, aquamarine, topaz, lapis lazuli, turquoise and rock crystals. The cabochon-cut was the preferred cut of this period.

Was the Pearl and Diamond Brooch designed during the Art Nouveau period ?

The design features in the Pearl and Diamond Brooch, such as the motif employed and materials and metals used can give an indication as to the period of origin of the brooch. Some of the features in the brooch that point to its possible Art Nouveau origins are :-

1) The plant motif used in the brooch that consisted of a spray of orchids, with stem, leaves, flowers and flower buds. The orchid flower motif was a common plant motif used during this period.

2) The use and diamonds and pearls, two of the popular gemstones used in jewelry during this period.

3) The use of old-cut diamonds such as rose-cut, single-cut, circular-cut and cushion-cut diamonds of 19th-century origin on the brooch.

4) The use of gold and silver only as metals in the brooch.

5) The flower head of the orchid  being mounted en-tremblant, a design feature first introduced in the 18th and 19th centuries.

Thus, based on the above lines of evidence we may conclude that the pearl and diamond orchid brooch most probably originated during the Art Nouveau period.

The pearl and diamond orchid brooch was assigned Lot No.367, at the Sotheby's "Magnificent Jewels and Noble Jewels" Sale, held in Geneva, on Tuesday, May 11, 2010. A pre-sale estimate of 13,000-19,000 CHF was placed on the brooch, which was accompanied by Swiss Gemological Research Foundation (SSEF) report, bearing N0.56162. The hammer price registered by the lot that included the buyer's premium, was 35,000 CHF, which was almost three times the lower pre-sale estimate and two times the upper pre-sale estimate.

4) Filigree - From Wikipedia, the free encyclopedia