Pearl Jewelry suite consisting of a necklace, a pair of pendent earrings and a ring

The name refers to a natural pearl jewelry suite, composed of a single-row pearl necklace, a pair of drop-shaped pearl ear-pendants and a pearl ring designated as Lot No. 159, at the Christie's Contemporary Jewelry and Watches Sale, No. 7664, held on April 29, 2008, at Jumeirah Emirates Towers Hotel, Dubai. United Arab Emirates. The jewelry suite was sold for $73,000, much above the pre-sale estimate of $35,000 to $45,000. Seven out of the 15 lots sold at this auction, registered prices above the upper pre-sale estimate, indicative of the strong auction demand for natural pearls. 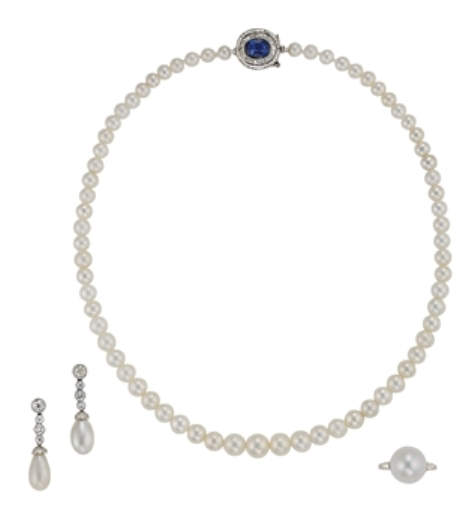 Pearl jewelry suite consisting of a necklace, pair of pendent earrings and a ring

Characteristics of the pearl jewelry suite

The necklace is a single-row pearl necklace, made up of 68 graduated pearls, with a range in size of 4.5 mm to 7.9 mm. The length of the necklace is 39.5 cm (15.5 inches), which under the modern system of classification of pearl necklaces is a "choker," which includes pearl strands of 14-16 inches.

The size and shape of the pearls in the necklace

The single-strand of graduated pearls vary in size from 4.5 mm to 7.9 mm. The largest pearls are situated in the front lower part of the necklace. The pearls gradually decrease in size, and the smallest pearls are found towards the rear of the necklace. The shape of the pearls appear to be spherical, but closer examination shows that strand includes spherical, near-spherical and button-shaped pearls. This is in keeping with the natural provenance of the pearls, as finding 68 pearls, all of which are perfectly spherical, among natural pearls would be an extremely difficult task.

The color and overtone of the pearls in the necklace

The color of the pearls are white, the most sought-after color in pearls. On zooming the pearls actually appear silvery-white. Thus, while the body color of the pearls are white, silver is an overtone color. The white body color is associated with the lack of any pigments in the conchiolin part of the nacre, which being transparent allows the white color of aragonite to show through. The silver overtone color is an optical effect caused by light passing through successive layers of aragonite.

The luster and orient of the pearls in the necklace

The luster and orient of the pearls are also exceptional, being pearls of saltwater origin. Luster is caused by reflection of light from the surface and just below the surface of the nacre, and is greater for saltwater pearls than freshwater pearls. Orient is caused by refraction that scatters light into its component colors, as it passes through successive layers of aragonite platelets. Luster, orient and overtones are all dependant on the thickness of the nacre; properties which are optimum for natural pearls, being composed entirely of nacre. This explains why such optical properties had remained unchanged in many natural pearls, some of which are over 400 to 500 years old, such as the La Peregrina, the Mancini Pearls and the Barbara Hutton Pearls. It is a matter of debate whether modern-day cultured pearls would be able to retain such optical properties for very long periods of time as their natural counterparts.

Characteristics of the pair of pearl ear-pendants

Characteristics of the pearl ring

History of the pearl jewelry suite

Nothing is known of the historical provenance of this pearl jewelry suite. The identity of the owner who put up the suite for sale was also withheld. The suite appears to be of 19th-century origin, according to certain features in the jewelry, such as the diamond cuts and design features in the ear-pendants and the clasp. The features of the pearls such as its range in size from 4.5 mm to 7.9 mm and the silvery-white color, shows that the pearls originated in the most prolific pearl producing oyster species in the world, Pinctada radiata, the main source of pearls for the world since very ancient times. Thus the possible sources of these pearls can be the Persian Gulf, the Red Sea or the Gulf of Mannar, the hub of the international pearl industry since very ancient times. An alternative source of the pearls could be Venezuela, the source of the Atlantic pearls, also produced by Pinctada radiata ( previously Pinctada imbricata), during the 16th to 17th centuries.

Lab Reports from the Gem Testing Laboratory of Great Britain

All three pieces of jewelry in the suite, the necklace, the ear-pendants and the ring are supported by Lab Reports issued by the Gem Testing Laboratory of Great Britain, certifying that the pearls incorporated in the pieces are all natural pearls.

Sale of the pearl jewelry suite at the auctions

The pearl jewelry suite was Lot No. 159 at the Christie's Contemporary Jewelry and Watches Sale, No. 7664, held at the Jumeirah Emirates Towers Hotel in Dubai, the United Arab Emirates.  A presale estimate of $35,000 to $45,000 was placed on the suite. However, after a keenly contested bid, the pearl jewelry suite, eventually sold for $73,000, higher than the upper pre-sale estimate by $28,000. This is in keeping with the current strong auction demand for natural pearls and jewelry incorporated with such pearls, a trend that began with the onset of the new millennium, in a market that was dominated by cultured pearls for over half-a-century. Out of the 15 lots of natural pearl jewelry that appeared at this auctions, seven lots registered prices much higher than the pre-sale estimate, in keeping with this trend. The highest prices recorded at the sale was Lot No. 178, A superb four-row natural pearl and diamond necklace, that realized $1, 743,400 and Lot No. 147, the Umm Kulthum's nine-row satlada necklace, that realized $1,385,000. See table below.