In Greek mythology, Muse referred to any one of the nine daughters of Mnemosyne and Zeus, each of whom presided over a different art or science. Muse in modern day terms refers to a guiding spirit or a source of inspiration. In modern English they are also used to refer to an artistic inspiration, or the source of an artist's inspiration. 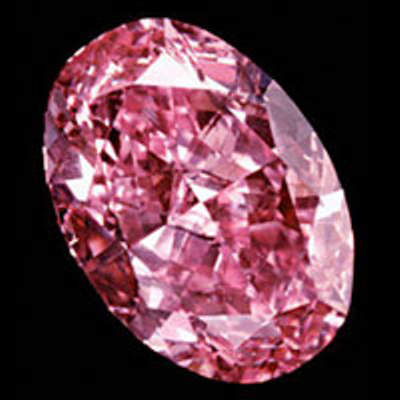 The 8.9-carat modern oval brilliant cut Pink Muse Diamond, shown above is undoubtedly an outcome of an artistic inspiration, of the master cutters of William Goldberg Diamond Corporation, which perhaps also inspired the name "Pink Muse" that reflects the vivid pink color of the diamond.

The Pink Muse Diamond is a modern oval brilliant-cut diamond with a weight of 8.90 carats. Except for the 2Cs, cut and carat weight, the other 2Cs, viz. color and clarity grades are not exactly known. 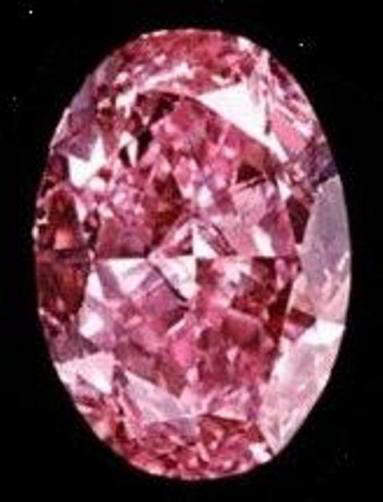 The oval shape of the Pink Muse Diamond falls within the traditional elliptical oval shape for diamonds, with a length to width ratio of approximately 1.5

The Modern Oval Brilliant-cut was first developed by master cutter Lazare Kaplan in 1957, based on the 1919 model developed by Marcel Tolkowsky for the round brilliant-cut diamond. The oval brilliant-cut is actually an elliptical variation of the more common round brilliant. The length to width ratio is very crucial in determining the actual shape of the oval. Greater the ratio more elliptical is the shape of the oval. Lesser the ratio, tending towards 1.0, more round will be the oval shape. A ratio of 1.33 to 1.66 is generally considered as a traditional oval shape for diamonds. A critical examination of the photograph of the Pink Muse Diamond, shows that the approximate length to width ratio of the diamond is 1.5, which falls within the traditional elliptical oval shape for diamonds.

Position of the 8.90-carat Pink Muse Diamond in the Table of Famous Pink Diamonds

The 8.90-carat Pink Muse Diamond occupies the 21st-position in the table of famous pink diamonds of the world.

Another significant fact that emerges from the above table of famous pink diamonds, is that the Pink Muse Diamond is the largest modern oval brilliant-cut pink diamond in the world. Coincidentally, William Goldberg Diamond Corporation also owns the largest modern oval brilliant-cut D-color diamond in the world, known as the Beluga Diamond, the subject of a different dedicated webpage. 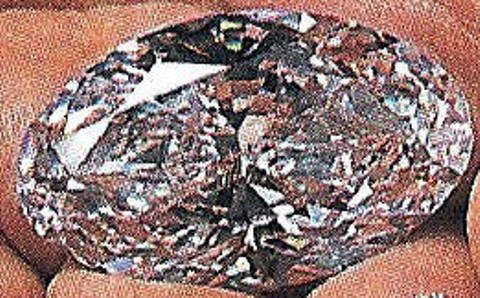 The possible color-grading of the diamond ?

The exact color-grading of the diamond is not known. However, William Goldberg Corporation's website speaks highly of the vivid pink color of the diamond, even in the rough, when it first arrived at their lapidaries. The site further states that the cut and polished diamond, maintained its rich pink color and became a world class pink diamond. Hence, going by the glowing description of the diamond by the company, and the rich pink color observed in the accompanying photograph, we could safely assume, that the color grading of this diamond under the GIA color grading system for colored diamonds would be nothing less than a fancy intense color grading. Hence, the possible color gradings of this world class pink diamond, are fancy intense, fancy deep or fancy vivid.

The clarity grade of the diamond ?

The fact that the Pink Muse diamond had a weight of 40 carats in the rough, and the cut and processed diamond had only a weight of 8.90 carats, provides a strong line of evidence for the quality and clarity of the diamond. 31.1 carats of the weight of the rough diamond had been sacrificed during the cutting and polishing process, in order to maximize the quality and beauty of the diamond. In doing so, the master cutters of the Pink Muse diamond had been guided by the well known maxim set by the founder of the company, William Goldberg himself, "never maximize the weight of a stone at the expense of beauty." thereby upholding the company's famous slogan, "The magic is in the make." Hence, one could speculate that the clarity of the diamond that sacrificed a major portion of its rough weight must be exceptional, and might be anything not less than VVS2, and ranging between FL and VVS2.

The Pink Muse diamond is a rare Type IIa diamond. It is Type II because it does not contain any detectable quantities of nitrogen. In other words they are chemically pure diamonds. Type IIa diamonds are generally chemically pure and absolutely colorless, and constitute about 1-2% of all naturally occurring diamonds. However, a small percentage of these diamonds, sub-type 2, less than 0.1%, have a plastically deformed molecular structure, creating areas of severe strain in the giant diamond molecule, that imparts rare fancy colors to diamonds, such as pink, purple, red, orange, brown etc. The occurence of pink diamonds is actually much less than 0.1%, around 0.000001% from statistical computations. Please refer to our webpage on the Graff Pink Diamond, the most expensive diamond ever sold at an auction. This is not surprising given the fact that after over 2000 years of diamond mining in the eastern Deccan region of India, and over 300 years of diamond mining in the Kollur region of Golconda in southeastern India, only around six famous and historic pink diamonds, the Darya-i-Nur, the Nur -ul-Ain, Shah Jahan, Agra, Hortensia and Conde Pink diamond had been produced. In the Argyle diamond mines only around 50 carats of small pink diamonds are produced, out of around 50 million carats annual diamond production.

Possible period when the rough diamond was discovered ?

According to the account on the Pink Muse diamond given by the company on its official website, when the diamond first arrived as a 40 carat rough, William Goldberg was taken aback with the vivid color and the character of the stone. Thus, it appears that the 40-carat rough diamond was discovered and purchased by the company during the lifetime of the founder. This significant fact combined with the fact that the cut employed on the diamond viz. the modern oval brilliant cut was first invented by Lazare Kaplan in 1957, gives the period of origin of the diamond, somewhere between 1957, the year of invention of the cut and 2003, the year of demise of the diamantaire and philanthropist William Goldberg.

The possible mine and country of discovery

The cutting of the diamond

The 40-carat, vivid pink rough diamond, was studied extensively by the master cutters of William Goldberg Diamond Corporation, including Diamantaire William Goldberg himself. The master cutters eventually decided to eliminate all parts of the diamond that were heavily included and not gem-quality, even though they were well aware that a substantial portion of the rough diamond would have to be sacrificied to arrive at a world class pink diamond. They were well aware that the final outcome would be well worth the sacrifice made. Eventually, after months of painstaking work, the well-proportioned modern oval brilliant cut diamond took shape, whose color and beauty even stunned its creators. The company attributes the final outcome to good cutting instincts and good fortune, the former attribute of course being abundantly available in a company that has been specializing in the cutting industry since 1952.

For more details on the history of William Goldberg Diamond Corporation, biography of William Goldberg and his contribution towards the development of the diamond industry, other famous diamonds created by the company etc. please go to our webpage on the Blue Lili Diamond.

7) Diamonds That Rock : In Pictures - www.forbes.com