The origin of the name "Pink Sunrise"is unknown as are other important details of this rare and unique diamond which first made it's appearance at the beginning of the 21st century. Perhaps, the name seems to reflect the unique color of this diamond, which is reminiscent of the shades of pink and red colors associated with the sun's appearance in the early morning eastern skies. 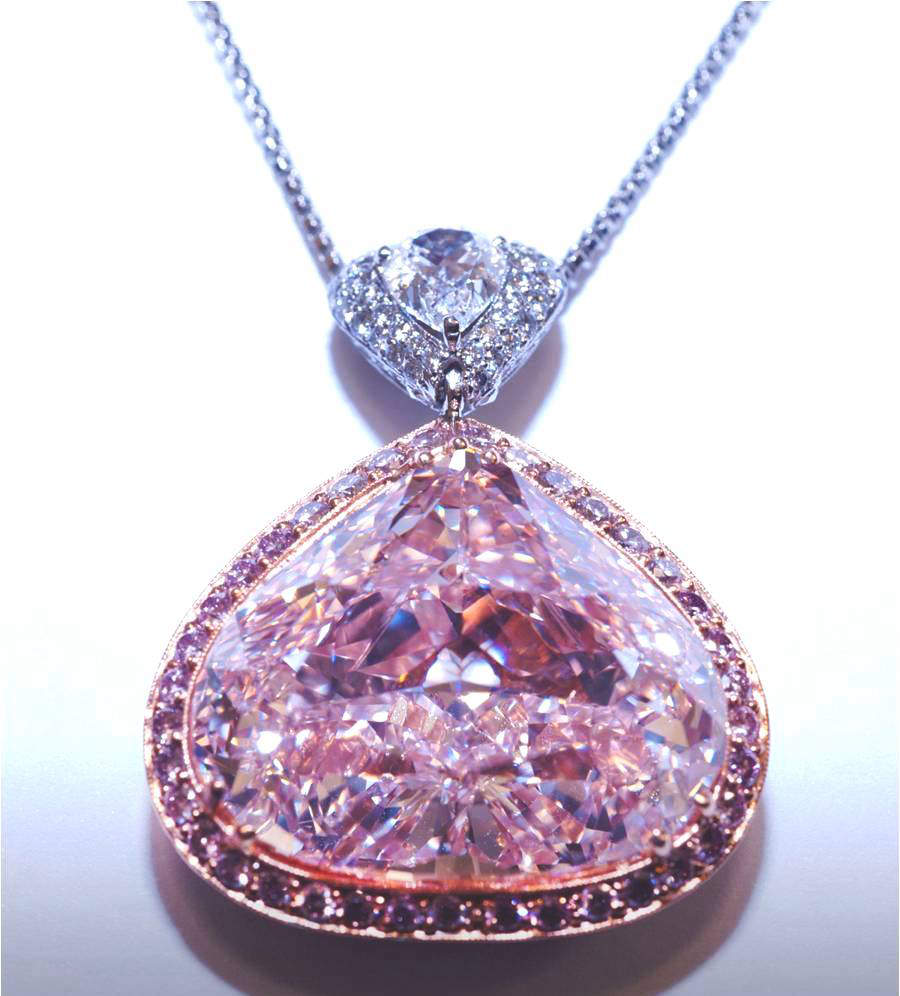 The "Pink Sunrise"is a 29.79-carat, fancy pink, internally flawless (IF), diamond, with a modified heart shape, reminiscent of the renowned 273.85-carat, D-color, De Beers "Centenary Diamond", which had an identical shape.

The "Pink Sunrise"is a type IIa diamond. The important features of this class of diamonds are :-

1. They are Nitrogen free or contain undetectable quantities of Nitrogen.

2. The crystals are plastically deformed, which imparts the pink color to the diamonds.

3. They are very rare in occurrence, perhaps much less than 0.1 % of all naturally occurring diamonds.

Besides the color, cut, clarity and weight of the diamond, nothing else is known about the early history of the "Pink Sunrise", such as the date of discovery, the country of origin, the mine of origin, the original owners of the diamond, the circumstances of the discovery etc. The only fact we know for certain about the diamond is that it was cut by the world renowned master cutter Gabi Tolkowsky, perhaps in Antwerp, Belgium, and the finished stone was unveiled to the world at the beginning of the 21st century.

A casual inspection of the photographs of the "Pink Sunrise"and the "Centenary"diamonds immediately reveals a striking similarity in their shapes. This similarity is not a matter of coincidence, but caused by deliberate design, as the two stones were cut by the same world renowned master cutter Gabi Tolkowsky, who lives in Antwerp, Belgium, and hails from a family of diamond cutters, with five new diamond cuts to his credit. Gabi Tolkowsky has also earned the rare distinction of cutting the world's largest faceted diamond, the 545.67-carat, fancy yellow brown, IF clarity, cushion shaped diamond, the "Golden Jubilee", which was presented to the King of Thailand, by his subjects in 1997, to mark the Golden Jubilee of his Coronation. Tolkowsky referred to the cushion-cut employed on the "Golden Jubilee"as a "fire rose cushion-cut."

According to Gabi Tolkowsky, the "Pink Sunrise"was the first rare and unique historical diamond, that was ready to appear at the beginning of the 21st century. The cutting and polishing of the "Pink Sunrise"into a modified heart shape took more than an year, in spite of the smaller size and carat weight of the rough stone. Even though the shape of the two diamonds were strikingly similar, the "Pink Sunrise"had it's own individual beauty, with it's own pattern of facets and design.

Gabi Tolkowsky is reported to have said that the inspiration which he gets to select an appropriate design for a rough stone, from a range of available cuts, result from an imposed fact. According to him, "every diamond large or small is a unique individual. None is similar to another. The shape, volume, hue and purity in the rough appearance have a combined effect on the mind. All what happens is the fact of revolving the rough stone between two or three finger and peering onto and into it, with the small folding hand loupe."The greatest challenge to the cutter is to reveal the hidden potential and beauty of the rough stone by selecting the appropriate cut.

Perhaps being a new discovery, the stone doesn't have any legend or history associated with it, but without any doubt it has the potential of becoming a famous diamond, and building it's own legends as it passes down from generation to generation.

Pink diamonds are extremely rare in occurrence. There are only about ten notable and famous pink diamonds in the world today, and almost all of them are less than 100 carats in weight. Even the smaller pink diamonds such as the ones produced in the Argyle Mines in Australia, are also extremely rare. A statistical estimate at the Argyle Mines in western Australia has shown that only a single carat of pink diamond is produced for every 1,000,000 carats of rough diamonds. This woks out to an astonishingly low percentage of 0.0001 %.

The earliest known source of pink diamonds in the world was the Kollur mines near Golconda, in Southern India. The Darya-i Nur, Nur-ul-Ain, Hortensia, and the Conde Pink might have originated in these mines. The next known source of pink diamonds were the diamond mines of Southern Africa. The Steinmetz Pink, Mouawad Lilac and the Mouawad Pink might have originated in these mines. Today the Argyle mines of western Australia have become a consistent source of pink diamond even though they are much smaller in size and have an average weight of about one carat. In spite of their smaller size the Argyle pink diamonds are noted for their intense pink colors which are superior to the lighter shades of pink, of diamonds from other traditional sources. At a Christie's auction in New York in 1989, a 3.14-carat Argyle pink diamond was sold for $ 1,510,000. This works out to about $ 480,000 per carat. But, privately Argyle had sold pink diamonds for up to $ 1,000,000 a carat.