The Porter Rhodes diamond gets it's name from the American diamond prospector Porter Rhodes in whose claim in the Kimberley mines, the rough diamond of 153.50 carats was discovered in February 1880. At that time the diamond was valued at 200,000 sterling pounds. 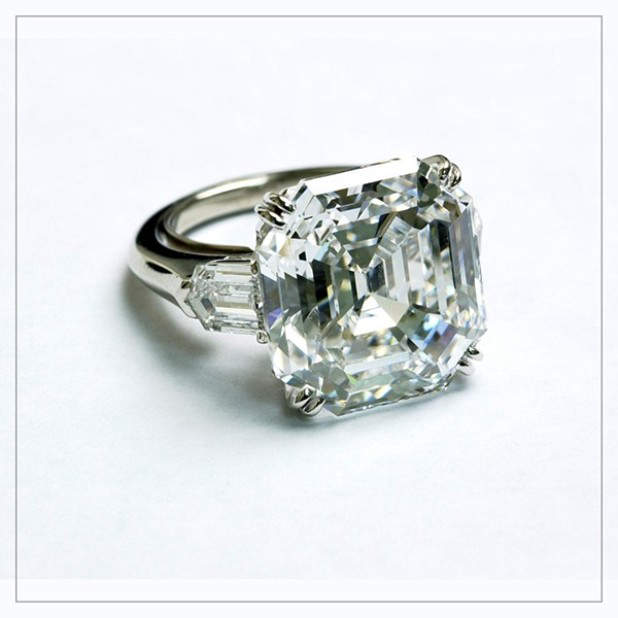 The diamond is a 54.04-carat, D-color, internally flawless (IF), asscher-cut stone.

The diamond is absolutely colorless and therefore undoubtedly a type IIa diamond, which constitute only about 1-2 % of all naturally occurring diamonds. These diamonds are chemically pure, and structurally perfect, and are known as the "purest of the pure"of all diamonds. All factors that can cause color in diamonds such as presence of Nitrogen impurities, structural anomalies etc. are totally absent. Hence the characterization of the diamond as absolutely colorless. 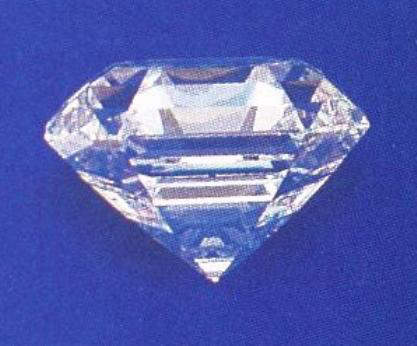 Porter Rhodes who had been working on his claim for sometime, had given strict instructions to his overseers, to maintain complete secrecy over any findings at the mine, until the stone was handed over to him. He had been in the habit of meeting with his overseers, at lunch break, when other workers are allowed to leave the mine for about an hour, to discuss about problems encountered in the mines, and to find out any good news about new discoveries. But, on that eventful day, Rhodes was busy at the magistrate's court, in connection with a case involving one of the native workers, who had been misbehaving himself. Rhodes was released from the court only a few minutes after 12 noon, and immediately went in search of his chief overseer, to get a briefing of what transpired at the mines. He was fortunate to meet the chief overseer on the street, and from the happy expressions on his face, he knew that something good had turned out that day. When he asked the man whether there was any good news, he replied in the affirmative. He said a white stone had been found, and handed it over to Mr. Rhodes. 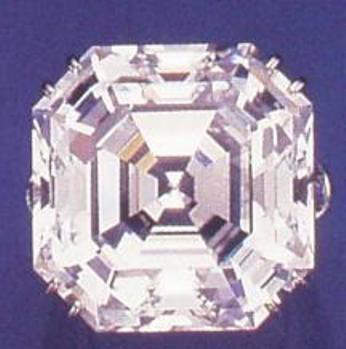 Mr. Rhodes hesitated for a moment, for he could not believe his eyes, when he was handed over an uncommonly white diamond, but later realized that it was indeed a genuine diamond. The news of the discovery was made public only four months after the discovery. By popular demand, Rhodes made arrangement for the exhibition of the rough diamond, at the office of a friend. He charged one pound from any person who wanted to see the diamond and within a few hours he had collected over 500 pounds, which was handed over to the management committee of the hospital on the diamond fields. Most of the dealers who came to see the stone, brought out their "test stones"and placed it against the exhibit and found out that the exhibited stone was whiter than all the "test stones", and they complemented Rhodes on his exceptional find.

Mr. Rhodes left Kimberley for London with his diamond, with the intention of finding a royal customer for his exceptional find. He reached London in January 1881. He was introduced to the curator of the crown jewels Colonel Gawler, by a friend Mr. Orpen, the Surveyor General of South Africa, who was kind enough to give a letter of introduction to the curator. The Colonel was kind enough to get an appointment for Mr. Rhodes to see Her Majesty Queen Victoria, who was on vacation, at her Osborne House, on the Isle of Wight, a favorite retreat for the royal family, which the Queen used to describe as "our island home."Mr. Rhodes left London on the 18th of January 1881, to keep his appointment with her Majesty, but was late in arriving at Osborne House, due to heavy snow fall. He met the master of the household, Sir John Cowell, and explained to him the cause of his delay. He replied that Her Majesty understood his problem, and would allow him to present himself the next day.

The following morning he took extra precautions, to make sure that he was punctual and exactly on time for the appointment. The attendants of the Osborne House, showed him into the apartments of the Master for the household, where he spent some time with Sir John and Lady Cowell. It was then announced that the Queen was prepared to receive him. After being presented to Her Majesty the Queen and His Royal Highness Prince Leopold, Rhodes opened the envelope containing the diamond, and handed the diamond over to the Queen, Her Majesty being the first person to see it out of South Africa. Her Majesty was so impressed and amazed by the beauty and clarity of the stone that she asked Mr. Rhodes whether the diamond was actually from the Cape. The question was probably prompted by the misconception in the early days after diamonds were discovered in South Africa, that diamonds produced in South Africa , were of inferior quality. The Queen congratulated him on acquiring this rare and unique stone. Subsequently the diamond was also examined by Prince Leopold and Princess Beatrice, who also complemented Mr. Rhodes on his acquisition.

Mr. Rhodes was then led to the Osborne Cottage, the temporary residence of Empress Eugenie. The Empress who seemed to be an authority on diamonds, and the history of famous diamonds, was also highly impressed by the diamond and remarked that it was "simply perfection", not knowing what to compare it with. Again the Empress queried from Mr. Rhodes, whether the diamond was actually from South Africa. The Empress further said "I have always been under the impression that diamond from the Cape were very yellow, and worth but little."

Having failed in his attempt to find a royal customer for his exceptionally unique diamond, Mr. Rhodes, returned to London. While in London his diamond was exhibited in Bond Street during the winter of 1881. Many ladies and gentleman inspected it, and heard from Mr. Rhodes some of the details of it's discovery. A syndicate of English diamond merchants offered Mr. Rhodes 60,000 pounds for his treasure, but Mr. Rhodes estimated it's value to be more than 200,000 pounds.

The diamond which was hitherto uncut was later faceted into a 73-carat old mine-cut, and sold to the famous jewelry firm Jerwood and Ward of London, who had the stone re-cut in Amsterdam to a 56.60-carat asscher-cut diamond. The London jewelry firm later sold the stone to the Maharajah of Indore, Tukoji Rao III. Indore was one of the Princely States of the Maratha Confederacy, ruled by the Holkar Dynasty.

Tukoji Rao III was a man of great wealth, and had a great collection of jewelry and diamonds, which included the "Indore Pears". In 1925, he was involved in a murder case, while his agents were trying to kidnap a former dancing girl in his palace, Mumtaz Begum, with whom he previously tried to develop an amorous relationship, but failed. The British Colonial authorities took a serious view of the implication of the Maharajah in the dastardly crime, and gave him two options, either to appear at the subsequent official inquiry or abdicate in favor of his son. The Maharajah chose the second option and abdicated in 1926.

The Maharajah had probably disposed of the Porter Rhodes, around this time, and in 1930, the second duke of Westminister, who was a collector and connoisseur of diamonds purchased the stone. The stone then found it's way to America, where it was owned for three decades by an influential American family.

Final transaction and present owners of the diamond

In the year 1987, the Porter Rhodes was purchased by Laurence Graff, the founder of the world renowned Graff Diamonds of London, who got the stone slightly re-cut to it's present weight of 54.04 carats. Graff has mounted the diamond on a platinum ring, which represents the current setting of the diamond.