The Portuguese diamond gets it's name from the legend that the diamond after it's discovery in Brazil in the 18th century, eventually entered the Portuguese Crown Jewels, even though there is no documentary evidence to substantiate this belief. 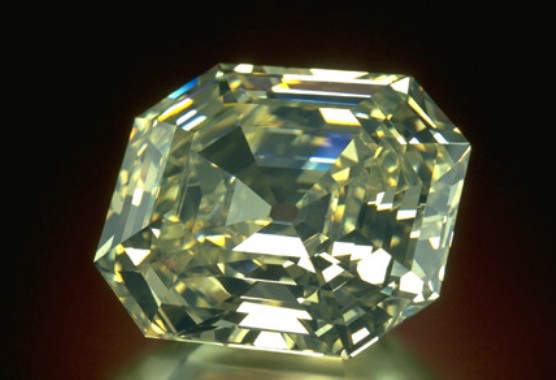 The diamond is a 127.02-carat, colorless (unknown color grade), internally flawless (IF), emerald-cut stone, with a slightly bluish tinge.

One of the peculiarities of the stone, is that it strongly fluoresces blue under ultra-violet light. A soft fluorescence is visible even in day light or artificial light, and gives the stone it's characteristic bluish tinge.

Type IIa diamonds are colorless because they are Nitrogen free and structurally perfect. They too show various degrees of fluorescence.

The cut, clarity, color, and size of this magnificent diamond, makes it undoubtedly a most notable and famous diamond, but unfortunately the origin and early history of the diamond seems to be shrouded in mystery. The lack of authentic information on the diamond, has given rise to legends, and unsubstantiated accounts of it's history based on conjecture.

The interesting fact about these legends and unsubstantiated accounts, is that they trace the origin of the stone to one of the three renowned diamond producing nations in the history of the diamond industry, viz. India, Brazil, and South Africa. 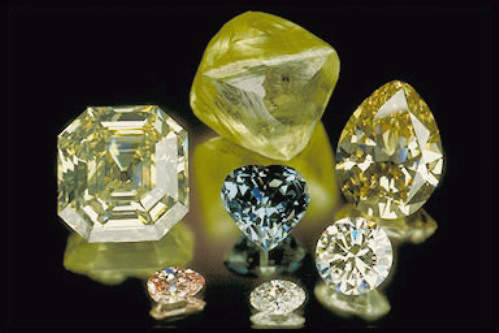 The Porteguese Diamond with other diamonds from the Smithsonian collection.

Another legend states that the diamond originally belonged to an Indian Prince or Maharajah, but does not specify the name of the prince, or whether the stone originated in India or another diamond producing country, the time of discovery of the stone, and the period when the Maharajah actually owned the stone. None of these details are mentioned, but the Maharajah is reported to have pawned the stone in London.

During the period 1946-47 the diamond was exhibited all over the United States, and extensive media coverage was given for all these exhibitions. But, in none of these media reports, the diamond was ever referred to as the Portuguese diamond or that it originated in Brazil. But the media reports gave conflicting versions of the history of the diamond. Most of the reports said that the diamond was owned by a syndicate of American diamond dealers and had mysteriously appeared in Amsterdam some years earlier as a rough-cut cushion-shaped stone weighing 187 carats, which was re-cut into it's present form. The diamond being re-cut in Amsterdam appears to be plausible, judging from the perfect octahedral emerald-cut of the stone.

It was in another newspaper article during this period that the story of the diamond belonging to the Indian Maharajah appeared. During these exhibitions the diamond was displayed as a pendant suspended from a platinum band set with 380 small diamonds.

From the year 1928 onwards the history of the diamond appears to be well documented. In February 1928, a lady by the name of Peggy Hopkins Joyce acquired the diamond from the jewelry firm Black Starr and Frost. But, the transaction was not done altogether in cash. Instead she traded a $ 350,000 worth pearl necklace and $ 23,000 in cash for the diamond. The diamond was reported to be mounted as the centerpiece of a diamond studded platinum choker, to be worn closer around the throat. A spokesman for the jewelry firm at the time had said, that the diamond was found at the Premier Mine, in Transvaal, South Africa, in 1910, and that the firm had obtained it shortly after it's discovery.

Miss Joyce was reported to be a dazzling blonde who performed in the Ziegfeld Follies, a true glamour girl of the 1920s. She is said to have been engaged fifty times, but actually married six times, and five of her husbands were men of great wealth. Sometime before 1946, Miss Joyce placed the diamond on consignment to the same jewelers from whom she purchased it, with a view of disposing it, but was not successful.

In 1951, Harry Winston purchased the diamond from Miss Joyce, and later for several years it traveled round the country as part of his "Court of Jewels"exhibition. In 1957, Winston sold the diamond to an anonymous international industrialist, who then traded it back in 1962. In the year 1963, the Smithsonian Institution, acquired the Portuguese Diamond from Mr. Harry Winston in Exchange for 2,400 carats of small diamonds.

The Portuguese diamond is presently the largest faceted diamond in the National Gem Collection, of the Natural History Museum of the Smithsonian Institution, Washington D.C.