The name "Pumpkin" is a rather unusual name for a diamond, but this was the name selected for the diamond by it's purchaser Ronald Winston, of the House of Harry Winston, who bought the stone at a Sotheby's auction, just one day before the Halloween Day in 1997. A hollowed out pumpkin, carved with a demonic face, and lit with a candle inside, known as a "jack-o-lantern" is a popular symbol of the Halloween Day, which falls on the 31st of October each year. Another possible reason for the selection of the name "Pumpkin", would have been the fancy vivid orange color of the diamond which almost resembles the color of a cut pumpkin. 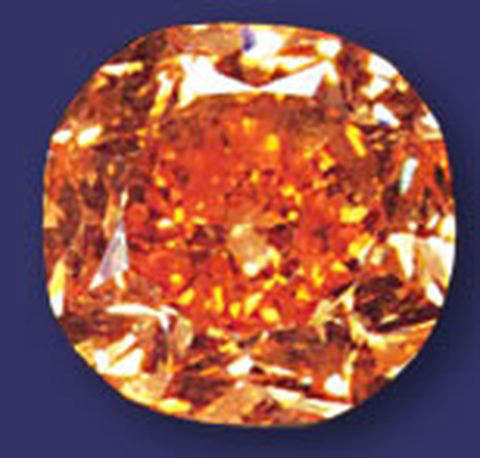 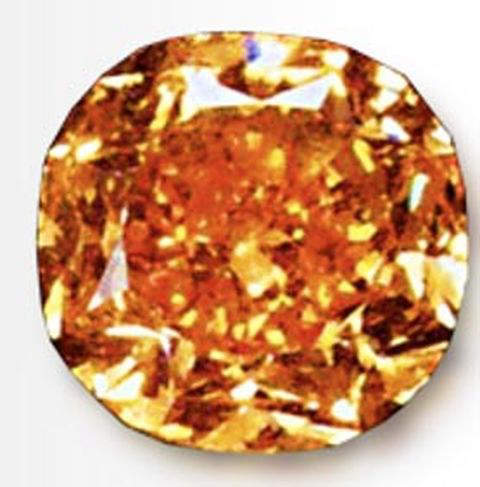 Another enlarged image of the 5.54-carat Pumpkin Diamond

Type I diamonds are again sub-divided into two depending on whether the Nitrogen atoms are found in groups or scattered as single atoms.

Type Ia - Nitrogen atoms are found in groups or aggregates of two or more atoms. Almost 98% of type I diamonds belong to this sub-group.

Type Ib - Nitrogen atoms are scattered as single atoms. Only 0.1% of type I diamonds belong to this sub-group. Orange diamonds also belong to this sub-group. The Nitrogen atoms absorb visible light in the blue end of the spectrum producing the intense yellow color known as canary yellow, orange or sometimes amber colors. As only 0.1 % of all naturally occurring diamonds belong to this group, the canary yellow, orange and amber colors are extremely rare in diamonds.

Country and mine of origin of the diamond

The diamond was mined in South Africa in 1997, but the mine of origin is unknown. It might have sometimes originated in the alluvial deposits of Southern Africa, because the original owner of the stone is believed to be an unnamed farmer. However, in the past the Zwartruggen dikes of South Africa, had been identified as a relatively prolific source of amber and orange colored diamonds, with 2-5 % of the output from these mines being amber or orange colored. A small number of amber and orange diamonds were also found in the output from the Finsch and Premier mines.

Characteristics of the rough Pumpkin diamond

The rough Pumpkin diamond when it arrived at the William Goldberg Corporation was a brownish-orange, 11-carat rough diamond.

The cutting of the rough Pumpkin diamond

The rough stone was cut and polished by diamantaire William Goldberg himself of the Goldberg Diamond Corporation. Orange diamonds are often modified by a brown color and the rough pumpkin diamond was no exception. However, surprisingly as the cutting proceeded a unique pure orange color was revealed, which assumed an intense orange color when the cutting was completed.

Grading of the Pumpkin diamond by the GIA

Sale of the Pumpkin Diamond

Ronald Winston later set the diamond in a ring between two smaller white diamonds. Halle Berry is reported to have worn the ring to the 2002 Oscars, where she won the Academy Award for the best actress for her role in the film Monster's Ball. 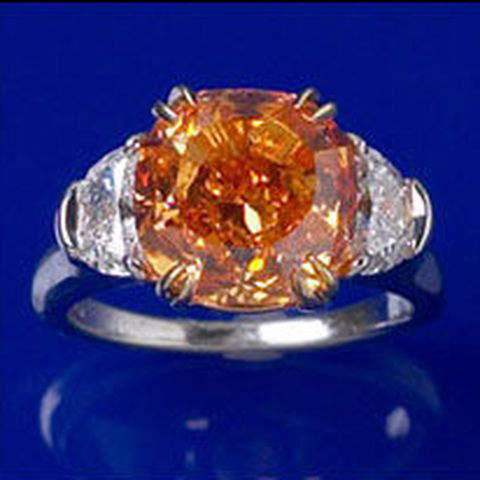 The "Pumpkin" diamond  was displayed as part of the Smithsonian's "Splendor of Diamonds" Exhibition, held between June 27th and September 30th, 2003, which also featured other famous diamonds, such as the Millennium Star (colorless), the Alnatt diamond (yellow), the Heart of Eternity (blue), Steinmetz Pink (pink), the Ocean Dream (blue-green)and the Mousaieff Red (red)diamonds. Diamonds of all colors were represented in the Splendor of Diamonds exhibition, except for green, purple and brown/cognac colored diamonds. The "Pumpkin" diamond was given the rare honor of being selected for this exhibition, because it was perhaps the only known diamond of its color and size in existence, like the blue-green Ocean Dream diamond. 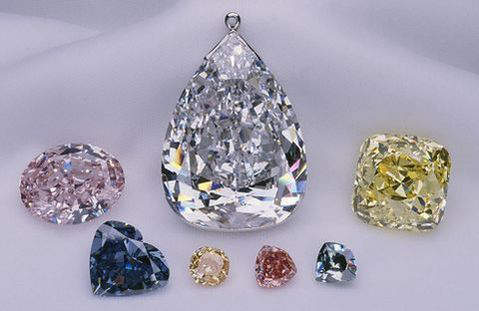 Starting from the pear-shaped Millennium Star in the center, the diamonds in the photograph above in the clockwise direction are - the Allnatt diamond, the Ocean Dream diamond, the Mousaieff Red diamond, the Pumpkin diamond, the Heart of Eternity diamond and the Steinmetz Pink diamond.

The diamond's estimated value in the year 2005 was around US$ 3 million, and was  rumored to have been sold to an anonymous buyer in March 2005.

The 18K white gold ring is set with a 4.19-carat fancy vivid orange, cushion-shaped diamond. The shank of the ring is set throughout with brilliant-cut white diamonds. 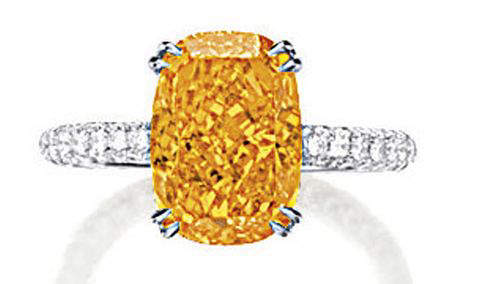 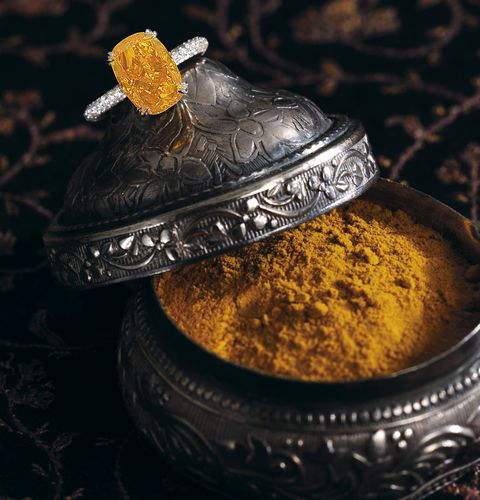 Another image of the fancy vivid orange, cushion-cut diamond comparing the color of the diamond with a pure orange substance in a container 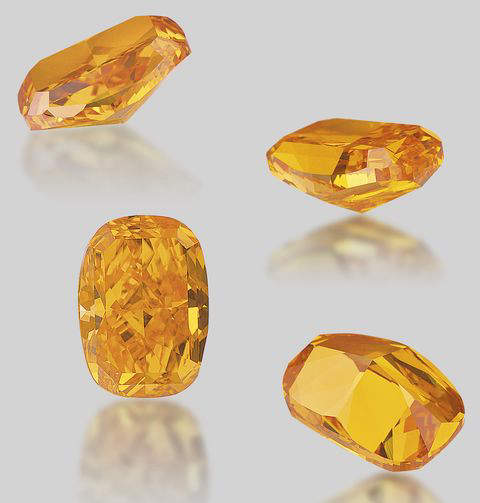 The Lady Orquidea diamond is a pure orange diamond without any brown component from the Lady Heart Diamond Collection, that consists of four other heart-shaped colored diamonds of different colors - red, pink, blue and canary yellow - set as the centerpiece of a pendant or ring. The diamond is a 2.00-carat, fancy vivid-orange, heart-shaped stone, set as the centerpiece of a white gold cluster ring in a heart-shaped bezel, surrounded by two rows of pave-set, round brilliant-cut diamonds, the rows maintaining the heart-shape of the central diamond. 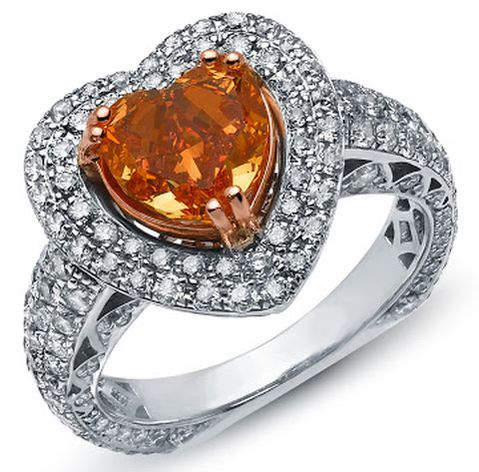 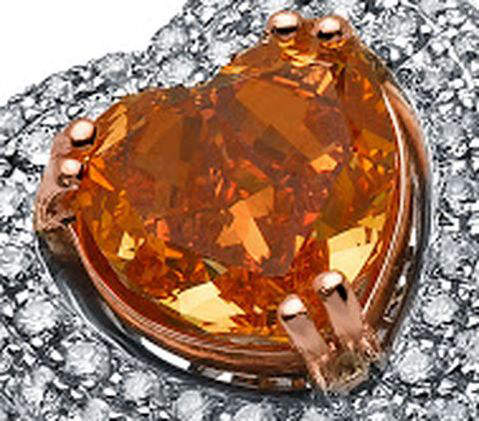 Considering the rarity of orange diamonds, an orange diamond of 1.00-carat size is significant, and deserves inclusion in this webpage dedicated to orange diamonds. The diamond appears to be pure orange and by comparison with other images appears to have a high color grading approaching fancy intense, fancy deep or fancy vivid. 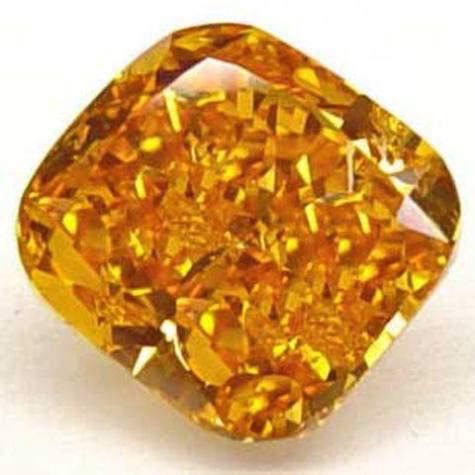 Prospective customers interested in buying the above orange-colored diamond should please contact U.S.I. Gems at the following URL :- https://usidiamonds.in/orange_diamonds

4) The largest fancy vivid orange diamond in the world that sold for 35.5 million dollars at a Christie's Geneva auction in November 2013

On November 12, 2013, Christie's reported the record-breaking sale of an extremely rare fancy vivid orange diamond known as "The Orange" weighing 14.82 carats, for a whopping US$ 35.5 million, at its Geneva Magnificent Jewels Auction. The sale set two new world records :- the highest price-per-carat (US$ 2.4 million) paid for any diamond sold at an auction and the highest ever price paid for an orange diamond at an auction. "The Orange" weighing 14.82 carats is the largest fancy vivid orange diamond in the world.

After this record-breaking sale another fancy-colored rare diamond- Orange- has entered the exclusive class of colored diamonds that includes pink and blue diamonds, that has registered sky-rocketing and mind-boggling prices at public auctions in recent times. 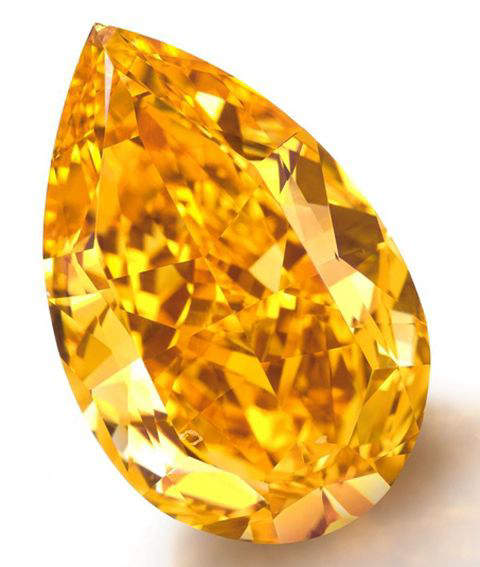 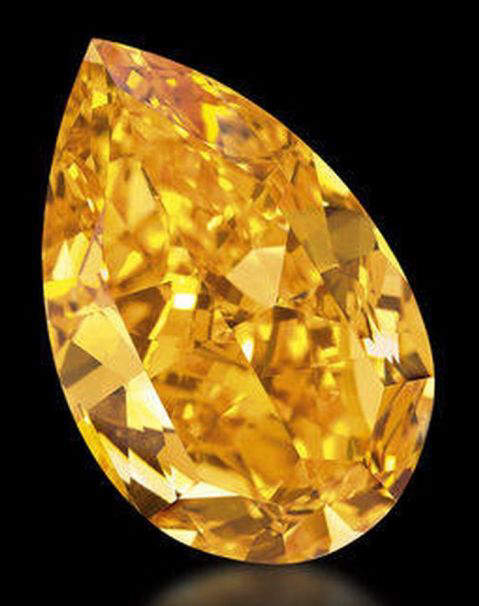 Another view of the 14.82-carat fancy vivid orange diamond