The Red Cross diamond gets it's name after the sale of the unnamed enormous canary yellow diamond, donated by a group of philanthropists to the British Red Cross Society, at an art sale organized by Christie's of London in the year 1918 on behalf of the Society.

The diamond is said to be more luminous than a white stone in artificial light. Another peculiar property of the diamond is it's ability to absorb light energy when exposed to brilliant light, and emit this energy subsequently in the dark, making the stone self-luminous.

The table facet of the diamond clearly displays a Maltese Cross, making the selected name Red Cross more appropriate for a second reason. 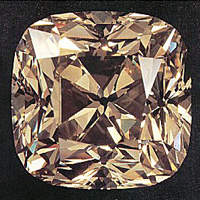 In the year 1918 Christie's of London, held an art sale on behalf of the British Red Cross Society and the Order of St. John. The purpose of the sale was to collect funds for the relief efforts of these International Humanitarian Agencies. A group of diamond dealing firms who used to purchase the output of the De Beers Diamond Mining Company, presented an enormous yellow diamond weighing 205 carats as a gift to this art sale, a gesture of support for the humanitarian efforts of these voluntary organizations. The sale of the diamond on the 3rd day of the art sale netted Â£35,575, and the diamond came to be known as the Red Cross diamond.

The origin of the diamond is undoubtedly from South Africa, probably from one of the mines belonging to the De Beers Mining Company, at Kimberley. The diamond is said to have weighed 375 carats in the rough and discovered somewhere between 1899 and 1901.

The diamond was reported to have been purchased by a member of an European royal family, and after changing hands several times, eventually came into the possession of an anonymous American businessman around 50 years later. In June 1973, the stone was put up for auction in Tokyo, but the highest bid reached was only Â£82,000, far below the reserve price of Â£2,000,000, and therefore the stone was withdrawn from the sale. Later in the same year in Nov. 1973, the stone came up for sale again, at a Christie's Auction, held in Geneva, but failed to realize the expected prize. The stone remained in Switzerland until 1977, when it was again put up for sale. The stone appears to have been purchased by an anonymous buyer, whose identity remains a mystery up to this day.

Color in diamonds are caused in three different ways :-

1. Presence of trace amounts of impurities like Nitrogen, and Boron in the crystal structure.

2. Plastic deformation of the crystal structure.

3. Exposure to natural irradiation over a long period of time.

Canary yellow diamonds come under the first of the above categories, in which the yellow color is caused by trace quantities of Nitrogen. Almost 98 % of all naturally occurring diamonds contain Nitrogen as impurities. They are known as type I diamonds as against those that do not contain Nitrogen Impurities, which are referred to as type II diamonds.

Type I diamonds are further sub-divided into two :- type Ia and type Ib

Type Ib :- Nitrogen atoms are scattered as single atoms. Only 0.1 % of all natural diamonds are type Ib.

Type IaA :- Nitrogen atoms are found as aggregates of 2 atoms known as A-aggregates. A-aggregates do not absorb visible light and therefore do not affect the color of the diamond. A-aggregates also quench fluorescence. Therefore type IaA diamonds are colorless and non-florescent.

Type IaB :- Nitrogen atoms are found as aggregates of 4 atoms, known as B-aggregates. B-aggregates do not absorb visible light, and do not affect the color of the diamond. They cannot quench fluorescence and therefore Type IaB diamonds are colorless and strongly fluorescent.

Type IaAB :- Nitrogen atoms are found as A-aggregates, B-aggregates, and aggregates of 3 atoms known as N3 centers. A and B aggregates do not affect the color of the diamonds but N3 centers do. N3 centers absorb visible light in the blue end of the spectrum giving rise to a pale to medium yellow color. The diamonds also show some fluorescence.

Type Ib :- Nitrogen atoms are scattered as single atoms in the crystal structure, and they absorb visible light in the blue end of the spectrum producing an intense yellow color known as canary yellow. However their occurrence is only 0.1 % of all natural diamonds. These diamonds also show fluorescence.