The Regent diamond gets it's name from the duke d' Orleans Philippe II, the Regent of France for the young King Louis XV from 1715 to1723. He purchased the stone in 1717 from Thomas Pitt, the grandfather of William Pitt, the Elder, the great 18th century British Statesman. 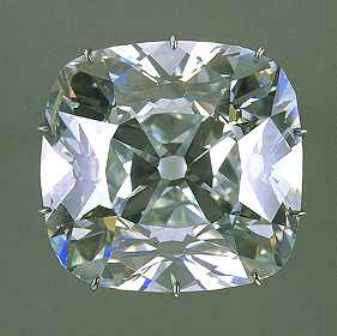 The diamond is a 140.64-carat, cushion-shaped, internally flawless stone, with a D-color grading, but having a slightly bluish tinge, characteristic of stones originating from the Golconda mines. The bluish tinge is caused by fluorescence and is more prominent if observed under bright daylight, rich in ultra violet wave lengths. The cut of the diamond is a stellar brilliant-cut with eight needle-like facets on the pavilion of the stone, pointing outwards from the culet facet.

Color in diamonds can be caused in three different ways :-

1. Presence of minute quantities of impurities like Nitrogen and Boron in the crystal.

2. Plastic deformation of the crystal.

3. Exposure of crystals to natural irradiation over long periods of time.

Diamonds that do not conform to any one of the above conditions are absolutely colorless, and are known as D-color or top-color diamonds. Such diamonds are rare and constitute only about 1-2 % of all naturally occurring diamonds. Thus D-color diamonds are chemically pure and structurally perfect diamonds.

Like all famous diamonds that originated in Southern India, the Regent diamond too has a thrilling an interesting history associated with it, depicting a pattern of human behavior, common to all ages of human existence, such as greed, the desire to get rich quick at any cost, the tendency to achieve one's goals either by fair or foul means, etc. After the acquisition of the diamonds by the monarchy, their failures as well as triumphs, became part of it's interesting history. Likewise, political and social upheavals too contributed to the colorful history of diamonds.

The Regent diamond is believed to have been discovered by a slave in the alluvial diamond mines of Golconda, known as the Parteal mines, on the banks of the Krishna river, sometime between 1698 and 1701. The territory of Golconda lay between the lower reaches of the Godavari and Krishna rivers, and extended to the Bay of Bengal coast. Golconda city was situated 5 miles west of Hyderabad in the north-central Andhra Pradesh State of southern India. It was the capital of the Qutub Shahi Kingdom from 1512 to 1687. Golconda was annexed to the Mughal Empire in 1687 by Emperor Aurangzeb, and remained under Mughal rule until 1724. At the time the Regent diamond was discovered in Golconda between 1698 and 1701, it was under the rule of the Mughal Emperors. It was in 1724, that the Mughals lost control of Golconda, when one of their viceroys Asaf Jah also known as Nizam-ul-Mulk declared independence, and founded the dynasty of the Nizams of Hyderabad.

The slave who discovered the diamond, smuggled it out of the mines, concealed within the bandages of a self-inflicted wound. How it would have been possible to smuggle an enormous rough stone weighing 410 carats in such a manner seems to defy one's imagination, but this is how the legend goes.

The slave reached the relative safety of the coastal areas, where he was able to meet a foreigner, an Englishman, who was a captain of a ship, and who could have assisted him in disposing of his valuable find. The slave negotiated a deal with the captain, offering him 50 % of the proceeds on the sale of the stone, after he was given safe passage to another country. The slave boarded the ship, when it was leaving the port, on it's way to Bombay. But, during this voyage, the captain was tempted to acquire the stone for himself, and decided to eliminate the slave by murdering him and throwing the body overboard. When the ship reached Bombay, the captain went ashore with the diamond, and found an Indian diamond merchant by the name of Jamchand, to whom he sold the diamond for a sum of about Â£1,000. Subsequently, the Captain had squandered the money possibly on alcohol and other vices, and in a fit of remorse for the crime committed by him, and while in a state of severe depression committed suicide, by hanging himself.

Jamchand sold the diamond in 1702, for about Â£20,000 to the British Governor of Madras, Thomas Pitt, who was the grandfather of William Pitt, the Elder, the great 18th century British Statesman. Thomas Pitt was an ambitious British merchant, whose involvement in business activities in Balasore, India, in 1674, brought him into conflict with the British East India Company, who got him arrested and fined in 1683, for engaging in trade without the permission of the company. Again in 1693, Pitt embarked on another trading venture in southern India, and the British East India Company, unable to check his activities, took him into service in 1694. In 1697, the company appointed him president of Fort St. George, Madras, in which post he served for 12 years, until he was dismissed in 1709.

Thomas Pitt got the diamond cut in London, by the diamond cutter Harris, between 1704 and 1706. The cutting took two years and cost about Â£5,000. Several smaller stones that were also cut from the original rough, were sold for about Â£7,000 and were purchased by Emperor Peter the Great of Russia. The larger stone, a cushion-shaped brilliant-cut diamond weighing 140.64 carats, turned out to be one of the finest and most brilliant of the known large diamonds, in spite of a small imperfection. The Regent Diamond is the 7th largest D-color diamond, and the 2nd largest cushion-cut D-color diamond in the world.

After returning to England in 1709, Thomas Pitt, started looking for prospective buyers for his exceptional diamond, which included the royalty of several European countries, one of whom was Louis XIV of France. Even though Thomas Pitt was not able to sell his diamond to Louis the XIV, after his death in 1715, when Philippe II, the duke d' Orleans, was appointed Regent, to the successor of Louis XIV, the five year old King Louis XV, Pitt succeeded in negotiating a deal for the diamond with the Regent, in 1717. The diamond was sold to the Regent for about Â£135,000, and thereafter the diamond came to be known as the Regent Diamond.

The diamond was later set in a crown for the coronation of Louis XV in 1723, and again in a separate crown for the coronation of Louis XVI in 1775. It was also used as an adornment on the hat of Marie Antoinette, the Queen consort of Louis XVI. In 1791, it's appraised value was Â£480,000. The French Revolution erupted in 1787 and lasted until 1799. During this tumultuous period, in 1792, the Garde Meuble (Royal Treasury) that housed the fabulous collection of the French Crown Jewels, was robbed and most of the famous and valuable diamonds such as the Regent, the Sancy, the French Blue (Tavernier Blue), etc. disappeared. Some of the gems were later recovered, but the whereabouts of the Regent Diamond remained a mystery, until finally it was traced to a Paris garret, where it was hidden in a hole under the roof timberwork.

The Regent diamond was used as security on several occasions by the Directoire (Directorate) and later the Consulat (Consulate), the governing bodies created after the revolution. The diamond was permanently redeemed by Napoleon Bonaparte in 1801, after he assumed power in 1799. Napoleon used the diamond to embellish his sword, getting it mounted on the hilt of his sword, that he carried at his coronation in 1804. Again in 1812, the diamond appeared on the Emperor's two-edged sword, mounted by the goldsmith Nitot. After Napoleon's defeat in 1814, he was exiled to the Island of Elba, and his second wife Marie Louise of Austria, carried the Regent diamond back to Austria. But, later her father Emperor Francis I of Austria, returned the Regent diamond to France and the stone again became part of the French Crown Jewels.

The Regent diamond had been the property of the French Louvre Museum since 1887 and remains so up to this day. It is one of the most important items in the famous and notable collection of jewels and jewelry belonging to the museum.