The "Rob Red Diamond"gets it's name from it's owner Mr. Robert Bogel, who had been a dealer of colored diamonds in New York city for more than 30 years. The color of the diamond is also included in the name, because of the rarity of it's occurrence.

the diamond is a fancy intense red, VS-1 clarity, pear-shaped stone, weighing just 0.59 carats, with the potential of becoming one of the most important red diamonds in the world, even surpassing the 0.95-carat round brilliant Hancock Red, in terms of purity and saturation of the red color. 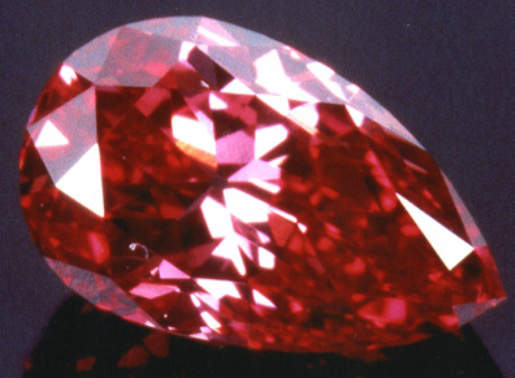 The origin of the "Rob Red"is most probably one of the alluvial deposits of the diamond mining areas of Brazil, such as Minas, Gerais, Bahia, and Mato Grasso. Mr. Robert Bogel, the dealer of colored diamonds, had spent most of his youthful years in the diamond mining districts of Brazil, searching for rough colored diamonds, and as if by coincidence the Rob Red diamond, that originated in Brazil, had this time come in search of him, and he became the proud owner of this unique stone, which was a symbolic reminder of his past experiences in Brazil.

According to Mr. Stephen Hofer, the renowned gemologist and colored stone specialist, the Rob Red diamond is the most saturated and purest red diamond measured visually and instrumentally to date in the world. He also said that the color grade of fancy intense red given to the diamond is fully justified given the purity and saturation of the red color that even exceeded the famous Hancock Red diamond.

Rarity of occurrence and reduced size

The phenomenon of red color in diamonds is extremely rare, that the actual number of certified red diamonds in existence in the world today may be less than twenty. Therefore to be able to see a red diamond in public is an extremely rare event let alone a red diamond being available for sale. The last red diamond discovered was sold for almost $ 1,000,000, twenty years ago. This is an indisputable statistical evidence for the rarity of the red diamond.

Besides the rarity and beauty of red diamonds, another important aspect is their restricted size, when compared to other colored and colorless diamonds. The world's 1st, 2nd, and 3rd largest red diamonds, the "Moussaieff Red", the "Red diamond", and the "De Young Red"have weights of 5.11, 5.05, and 5.03 carats respectively. In comparison the weights of the world's 1st, 2nd, and 3rd largest D-color diamonds, the "Cullinan I", "Cullinan II", and the "Centenary"diamonds have weights respectively of 530.20, 317.40 and 273.85 carats.

The combined characteristics of rarity and beauty make red diamonds the most expensive of all diamonds and several of them are amongst the most famous diamonds in the world. Most red diamonds are less than one carat in size. The most famous Brazilian red diamond the "Hancock Red"that belonged to Warren Hancock, a collector and connoisseur of diamonds, weighed only 0.95 carats and fetched a price of $ 880,000 at a Christie's auction in 1987, which works out to a record price of $ 926,000 per carat.

The Argyle Diamond mines in Australia have become a consistent source of rare fancy colored diamonds such as pink and red. However their occurrence is less than 0.1 % of the overall production of rough diamonds in the mines. The occurrence of red diamonds are even much less than 0.1 %. The Australian pink and red diamonds are renowned for the intensity of their colors. At a Christie's auction in New York in 1989 a 3.14 carat Argyle pink diamond sold for $ 1,510.000.

Red diamonds are type IIa diamonds, free of Nitrogen impurities. Type IIa diamonds with perfectly formed crystals are absolutely colorless and are known as D-color or top-color diamonds. But a very small percent of these diamonds have undergone a distortion in the crystal structure due to twisting and bending of the crystal units as they rose to the surface of the earth from deep inside the earth's crust. The distorted areas in these crystals impart rare fancy colors to the diamond such as pink, red, purple, etc. by absorbing light in different regions of the spectrum. Therefore red diamonds are plastically deformed type IIa diamonds.