The Rojtman diamond gets its name from the one time owner of the diamond Marc B. Rojtman, who acquired the stone in the early 1960s. Mr. and Mrs. Rojtman were collectors and connoisseurs of not only jewels, but also old master paintings and other art works in general. They were devout patrons of the arts and extended their patronage to the study and development of the arts. 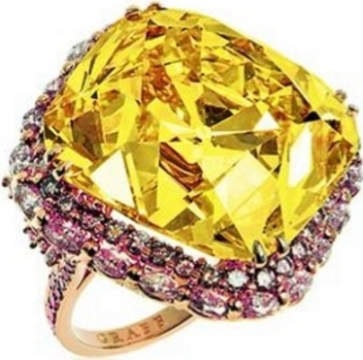 the Rojtman diamond is a 107.46-carat, cushion-shaped, fancy yellow diamond of unknown clarity grade, but the clarity should be exceptional going by the descriptions of the diamond.

In the list of famous yellow diamonds greater than 100 carats in weight the Rojtman diamond occupies the 24th position. See table below. 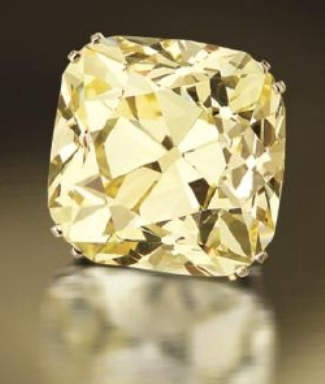 List of yellow diamonds greater than 100 carats in weight

The diamond being a fancy yellow diamond, which is still a medium yellow shade, is most probably a Type Ia diamond, and Sub-type IaAB. The diamond is Type I because it contains detectable quantities of nitrogen impurities. It is type Ia, because nitrogen atoms exist as aggregates of 2-atoms (A-aggregates), 4-atoms (B-aggregates), and 3-atoms (N3 centers). A and B aggregates do not affect the color of diamonds, but N3 centers do, imparting a pale to medium yellow color depending on the concentration of N3 centers. Normally all three aggregates occur together and the Sub-type is known as IaAB. 98 % of all naturally occurring diamonds are Type Ia.

If the nitrogen atoms are scattered as single atoms in the crystal structure, they impart an intense yellow color to the diamonds, such as fancy intense and fancy vivid yellow colors. Such diamonds are known as Type Ib, but their occurrence is only about 0.1 % of all naturally occurring diamonds.

The early history of the diamond such as the country of origin, mine of origin, date of discovery, original owners of the diamond, the person or company involved in the cutting etc. are all unknown. But some experts believe that the diamonds origin is from the alluvial deposits of the South African diamond fields, in the early days of diamond mining in South Africa. The 123-carat Stewart diamond also originated in a similar manner.

The first time the diamond made its public appearance was in 1957, when Harry Winston, the internationally famous jeweler and diamond dealer, based in New York City, acquired the diamond, which was a yellow cushion-cut weighing 107.60 carats. Harry Winston got the diamond re-cut slightly to its present weight of 107.46 carats, and mounted it in an elaborate clip- pendant combination.

In 1963 he sold the diamond to Marc B. Rojtman and his wife Lilian of the United States, who were keen collectors of jewels. But, they were more renowned as collectors and connoisseurs of Old Master paintings and other art works. They extended their patronage to the study and development of arts, and set up a family foundation that advances education in the arts.

When the Rojtman diamond was in their possession, they lent it for an exhibition at the De Beers Diamond Pavilion in Johannesburg in 1966.

On April 25th 2006, the Rojtman diamond featured at a Sotheby's Magnificent Jewels Auction, held at Manhattan, New York. The sale of the 107.46-carat, elegant, cushion-shaped, fancy yellow color diamond, was expected to be the highlight of the auction. The spectacular diamond had an estimate of $ 1.5 - 2.0 million placed on it. The sale also featured another historically important diamond the, 65.57-carat, fancy dark orange brown, Golden Maharajah diamond with an estimated value of $ 400,000 to $ 600,000. Other items in the auction included a spectacular array of jewelry and colored gemstones by Cartier's, Van Cleef &Arpels, and Harry Winston. Sotheby's also held a public viewing of the items to go on sale from April 19 to 24, at York Avenue, in New York.

There was an enthusiastic response to the auction, from buyers representing all regions of the world. The Rojtman diamond as expected achieved a record price of $ 1.92 million. However, the greatest surprise at the auction was the price achieved by the Golden Maharajah diamond, which fetched a record price of nearly $ 1.4 million, far in excess of the estimated value, after an intense bidding competition between eight of the buyers. The Rojtman and the Golden Maharajah diamonds were both acquired by Graff Diamonds Ltd. of London.

The Rojtman diamond is now the proud possession of Laurence Graff, the King of Diamonds, who is said to have handled more important gem-quality diamonds than any other living dealer. Graff has set the Rojtman diamond in an exquisitely designed platinum ring, surrounded by smaller pink diamonds.