The name "Rose of Dubai"was given by its owner Amer Radwan, the Dubai based diamond dealer, who named it soon after he purchased the diamond by a competitive bid, made by telephone, at a Christie's Magnificent Jewels Sale, held in New York, on October 19th, 2005. The name seems to reflect the beautiful rose pink color of the stone, which is a fancy pink color according to the GIA color grading scale.

The "Rose of Dubai"diamond is a 25.02-carat, fancy pink, pear-shaped diamond, with an internally flawless (IF) clarity grade, the highest clarity grade for a diamond. In the list of notable pink diamonds about which details are available the "Rose of Dubai"occupies the 7th position. See table below. 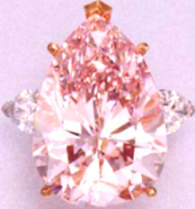 The Rose of Dubai Diamond

The diamond is Type IIa, because of the absence of other impurities besides nitrogen. Diamonds that have impurities like boron and hydrogen are known as Type IIb.

2) Structurally imperfect :- These diamonds have crystals that have undergone plastic distortion either during their formation in the earth's mantle or subsequent rise to the earth's surface during volcanic eruptions. The plastically distorted areas changes the absorption spectrum of the diamond producing rare fancy colors such as pink, red, purple, and also brown. Their occurrence is less than 0.1 % of all naturally occurring diamonds. However in the Argyle mines of Australia, plastically distorted brown diamonds account for almost 80 % of the production.

3) Naturally irradiated :- These diamonds have been exposed to natural radiation such as alpha, beta and gamma rays, over a long period of time, after their formation in the earth's mantle. Such exposure had produced structural changes in the crystal that causes green color in diamonds. Their occurrence is less than 0.1 % of all naturally diamonds.

Thus the "Rose of Dubai"diamond is a structurally imperfect Type IIa diamond.

The early history of the diamond such as the country and mine of origin, the date of discovery, the weight of the rough stone, the original owners of the diamond etc. are not known. The first time we hear about the diamond is in the 1980s when it was owned by the London based jeweler Laurence Graff. Details of how Laurence Graff, the King of diamonds acquired the stone are not available. In all probability the diamond appears to be a new discovery, and given the size and the quality of the diamond, it might have had its origin in the Premier Diamond Mines of South Africa.

How Amer Radwan acquired the "Rose of Dubai"Diamond

The "Rose of Dubai"diamond was acquired by Amer Radwan, at the Christie's Magnificent Jewels Sale held in New York, on October 19th, 2005. The diamond was the top lot of around 400 lots put out for sale on that day. The pre-sale estimate of all the lots was around $ 22 million, and the estimate placed on the "Rose of Dubai"alone was $ 2.5 to $ 3.0 million. However, when the auction concluded the sale had garnered a total of $ 35, 652, 800, almost $ 13.5 million more than the pre-sale estimate. This was the highest total achieved at a Christie's auction since 1996.

According to Rahul Kadakia, head of jewelry for Christie's Americas, the successful sale was not an accident, but the result of a careful strategy adopted by them. The sale was planned for the needs of the market. The items offered for sale were carefully selected, and the company had to make sure that there was a customer for every lot on offer. All pieces were chosen with a certain client in mind. In other words the auction was set to proceed in a pre-planned direction. It was unlike other auctions where people just walked in, and bid for any lot that fancied them. Thus pre-auction marketing was a vital component of the new strategy.

As far as the top lot of the auction, the "Rose of Dubai"was concerned, several big time dealers had been approached by Christie's which included Amer Radwan, the Dubai based diamond dealer. It is said that Amer Radwan was so determined to acquire the diamond that he kept awake till 3.00 a.m. Dubai time, which was equivalent to the auction time in New York, so that he would not miss the chance of bidding when the diamond came up for sale. The stone was the final lot of the sale, and was the grand finale of the long drawn out auction which started at 10.00 a.m. in the morning. As the auction started there was perfect silence in the auction room, and everyone's attention was drawn towards the phone banks, watching and listening intently, as seven bidders vied with each other by telephone, hoping to acquire the prized gem. As the price of the diamond swelled the bidders dropped off one by one, until only, three major international dealers were left. The intense competition between the three major players drove the price of the diamond beyond all expectations and exceeded double the estimated value. Finally, the hammer was brought down in favor of Amer Radwan, when the price had reached $ 6,008,000, i.e. $ 3,000,000 more than the estimated price. This works out to about $ 240,000 per carat.

Some of the items that fetched record prices at the sale

6) A Louis Comfort Tiffany necklace made of black opals, sapphires and demantoid garnets, sold for $ 262,400.

Dubai is one of the seven emirates that comprise the United Arab Emirates (UAE). It is strategically located at the crossroads of trade and commerce between east and west, and has become the main business hub of the region. A politically stable country with a business friendly atmosphere, that has provided a multitude of incentives for foreign investment, with state-of-the-art infrastructural facilities, and relatively low labor costs, have served to attract business investment from all over the world, in almost every sphere of economic activity.

The Dubai Diamond Exchange (DDE), is the controlling body of the diamond trade in Dubai, and is a subsidiary of the Dubai Multi Commodities Center. At the beginning Dubai was mainly a transit point for rough diamonds. Rough diamonds were imported into the country and subsequently re-exported to countries like India, Russia, China, and the European countries. But today Dubai has grown into a center that provides a comprehensive range of services from mining to retail and also laboratory certification services, and diamond banking.

The UAE today is not only one of the largest trading centers in the world for rough diamonds but also the third largest consumer of diamond jewelry in the world after the USA and Japan. In the year 2005 the volume of rough diamond imports into Dubai was 37 million carats, and the volume of exports was 34 million carats;the total volume traded becoming 71 million carats. The value of the imports was equivalent to $ 1.484 billion dollars, while the value of the exports was $ 2.248 billion, the total trade in rough diamonds becoming $ 3.732 billion. This represented a 46.25% increase over the figures for the year 2004, which stood at $ 2.553 billion.

The UAE is the first country in the Arab World to be a signatory to the Kimberley Process Certification Scheme, in order to ensure that no blood diamonds enter the country. The Dubai Diamond Exchange is the government body in charge of implementing the scheme, and performs the important task of scrutinizing and clearing such certificates accompanying rough diamond imports into the country.