The gem and jewelry trade in Sri Lanka is as old as the country's ancient history and civilization. The country can boast of a recorded history of over two thousand five hundred years, and according to recent archaeological excavations the history of the country could be dated back to even several millennia prior to this. Perhaps, Sri Lanka is the oldest country in the world that supplied colored gemstones to the entire world, and according to legend King Solomon had sent his ships to Sri Lanka to bring back supplies of rubies and sapphires, ivory, peacocks, apes and elephants that were available in plenty in the country.

The ancient people of Sri Lanka not only mined valuable rubies and sapphires, but also learnt how to process these rough stones to dazzling finished gemstones, and subsequently set them in gold and silver jewelry and other ornaments. Thus the handcrafted jewelry industry in Sri Lanka also has a very ancient tradition. The ancient kings of Sri Lanka, realized the important role played by the jewelry craftsmen in society, and extended royal patronage to their crafts, with the result the craftsmen were placed in a privileged position in society, as important as other segments of society such as the farmers, the fisherman, the weavers, the pottery workers, etc. 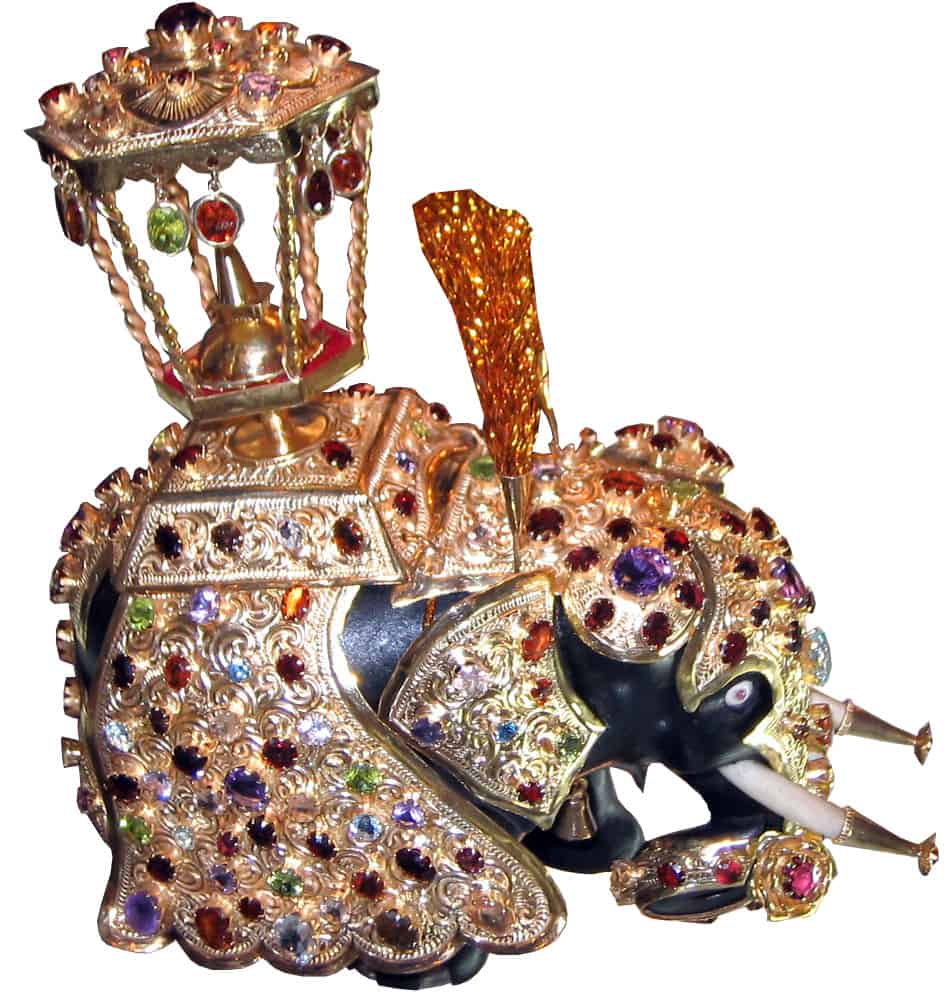 Ibn Batuta, the famous Arab traveler from Tangiers in Morocco, visited Sri Lanka in 1344, after traveling overland through southern India. In his travelogue, he made the following comments about gemstones of Sri Lanka :- "Gems are met with in all localities of the island of Serendib. There are the red rubies, the yellow topazes and blue sapphires. All women in the island of Serendib possess necklaces of precious stones of diverse colors; they wear them also at their hands and feet, in the form of bracelets and anklets. I have seen on the forehead of the white elephant several of these precious stones, each of which was larger than a hen's egg."

This account of Ibn Batuta shows how advanced the jewelry industry in Sri Lanka was during the early 14h century. The tradition of adorning elephants with precious stones during special royal as well as temple ceremonies had been there since ancient times. The elephant was covered with jewel studded apparel that covered both sides of the animal, and the forehead and trunk in the front. The jewel-studded relic casket was placed on the back of the elephant, which was supported by the rider.  Such elaborately decorated elephants can be seen parading the streets of Kandy, the sanctuary of the sacred tooth relic of the lord Buddha, once every year in August, when the relic is taken in procession along the streets of the ancient city. Hundreds of elephants take part in this procession, and the chief elephant that carries the sacred tooth relic is  elaborately decorated, as shown in the jewel studded replica on this page.