The Sarah diamond is associated with the name of Graff, which symbolizes rarity, beauty, excellence and above all the best quality and craftsmanship in jewels and jewelry. The origin of the name Sarah for the diamond is not known, but the diamond was handled by the "King of Diamonds"Laurence Graff, who is said to have handled more important gem-quality diamonds, than any other living dealer. 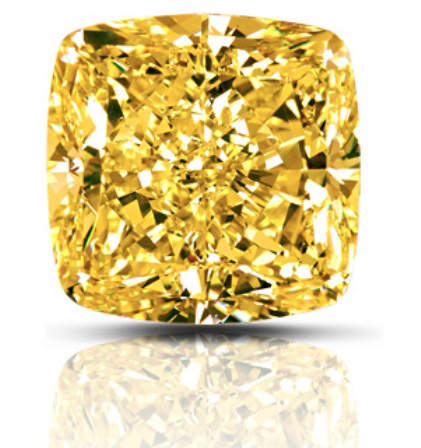 Being a yellow diamond, the Sarah is a type I diamond, which constitutes 98 % of all naturally occurring diamonds. The yellow color in diamonds is caused by trace quantities of Nitrogen (less than 0.1 %) in the diamond crystal. The intensity of the yellow color depends on the concentration and distribution of the Nitrogen atoms. If the Nitrogen atoms are scattered as single atoms in the crystal structure, they absorb light in the blue end of the visible spectrum producing an intense yellow color. These diamonds are known as type Ib diamonds, which constitute only about o.1 % of natural diamonds. The canary yellow color belongs to this group and possibly also the fancy intense and vivid yellow colors.

The diamond is a relatively new discovery and therefore does not have much of a history associated with it. The Sarah diamond is of South African Origin, but the mine of origin is not known. The rough diamond weighed 218 carats, and was a beautifully formed natural octahedral crystal, like the rough Oppenheimer Diamond. Naturally formed diamond crystals usually take an octahedral shape and sometimes a dodecahedron. Even in it's rough state, the diamond was showing a fire and brilliance caused by the reflection and refraction of light from it's naturally formed smooth crystal facets. In this respect the rough diamond was a very unique stone.

Other details such as the date of discovery of the diamond, the original owners of the diamond, and the date of purchase by Graff, if they were not the original owners, are all conspicuously lacking. Graff diamonds, a world leader in the diamond industry is involved in all aspects of the industry, such as mining, cutting, polishing, and the manufacture of exquisite and fine diamond jewelry. In South Africa, Graff has a subsidiary company known as the South African Diamond Corporation, which is engaged in mining operations. Besides this, in Johannesburg, South Africa, Graff has one of the largest state-of-the-art diamond processing factories in the world, employing over 300 expert craftsmen. It is reported that tens of thousands of diamonds weighing thousands of carats are cut and polished in this factory every year.

Graff has two specialized centers in the world for the cutting and polishing of large rough stones, that one day might eventually become notable and famous. These centers are situated in Antwerp and New York. The Antwerp workshop is manned by a well trained and highly experienced team of 30 experts, who handle each stone, individually and after prolonged and meticulous planning , decide on the most appropriate shape, size and finish that would bring out the full potential of the stone.

The New York workshop is manned by a team of 10 highly experienced cutters, headed by a master cutter. This factory has cut and polished, several of the world's notable diamonds including the 101-carat "Golden Star"diamond. The "Sarah Diamond"being an exceptionally large rough diamond, weighing 218 carats, would probably have been cut in one of the two specialized centers of Graff, dealing on large diamonds.

From the natural octahedral shape of the rough stone to the almost cubic cushion shape of the finished diamond, is a relatively easy transformation, and was achieved by the masters cutters of Graff with the minimum of wastage. The 218-carat rough diamond after a cutting and polishing process that lasted nearly 4 months was transformed into a cushion-cut of 132.43 carat finished diamond of extraordinary brilliance with only a loss of weight of 39 %. The pavilion of the cushion-cut diamond is radiant-cut, giving the stone it's unusual brilliance.

Among the list of famous diamonds that had the privilege of receiving the unique and magical touch of Graff's expertise are the Golden Star diamond, the Paragon, Idol's Eye, Porter Rhodes, Golconda D, the Maximilian, the Graff Asscher-cut, etc.