The "Triton Pendant" and the "Centaur" are two sculptural jewels that were displayed at the traveling exhibition, Pearls : A Natural History, organized by the American Museum of Natural History, New York, in collaboration with the Field Museum of Chicago, that was first held in New York in October 2001, and subsequently in museums around the United States, and countries like Canada, Japan, Australia, The United Arab Emirates and France, until the year 2008.

The two sculptural jewels are examples of late Renaissance jewels or jewels inspired by such designs of a subsequent period, that incorporated a large baroque pearl as its center piece, which together with other gemstones, gold and enameling formed a pre-conceived shape that was visualized by the Renaissance craftsmen. Such jewels known as "sculptural jewels" originated in Western European countries, such as France, Spain, Netherlands, Bavaria, and Florence, during the late Renaissance period from the 16th to 17th centuries, and was as a result of the skill, genius and inventiveness of the jewelry craftsmen of this period, who designed and popularized such jewels, in order to make good use of the large number of irregular shaped nacreous pearls, known as baroque pearls, that had accumulated among the stocks of pearl dealers of the period, with no apparent use in traditional jewelry settings. Some of the common designs in which sculptural jewels were turned out include, dragons, monsters, sea horses, dolphins, mermen. mermaids, and other mythical creatures, and naturalistic themes such as birds and mammals. The "Triton" and "Centaur" used as the designs for the two jewels, that form the subject of this webpage, are also creatures from Greek mythology.

The design of the pendant

The design of this pendant was inspired by the Greek mythological god Triton, the messenger of the deep sea, who is the son of Poseidon, the god of the sea, and Amphitrite, the goddess of the sea, said to be living with his parents in a golden palace in the depths of the sea. Triton is usually represented as a merman, whose upper half of the body is human, and the lower half, like the tail of a fish. Triton, like Poseidon carried a trident in one hand. In his other hand he carried a twisted conch shell, which he blew like a trumpet to calm or raise the waves.

Characteristics of the pendant

The design of this pendant appears to have been inspired by the torso-shaped baroque pearl, which is the centerpiece of the pendant. Apart from this other components of the pendant include natural pearls, rubies, gold and enamel. The head and hands of  the merman are made of engraved enameled gold, with a color matching the color of the torso. The fishtail-like lower half of the merman is also made up of enameled gold, the color of the enamel being dark blue. Triton is carrying a trident in his left hand and a trumpet in his right hand. 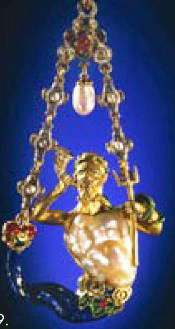 The pendant is suspended by two gold chains, studded with pearls. The short chain which is attached to the trident is studded with three spherical shaped pearls. The longer chain attached to the tail of the Triton is studded with four spherical pearls. At the point where the two chains meet, a large drop-shaped white pearl is suspended. There are four rubies in the pendant; two rubies situated at the end of the merman's tail; a third ruby near the waist region; and the fourth ruby at the point where the two chains meet, and the drop-shaped pearl is suspended.

The Triton pendant originated during the Renaissance revival period ?

The Triton pendant is part of the collection of jewelry of the American Museum of Natural History. It is believed to have originated in Italy in the mid 1800s. However, sculptural pendants first appeared in the history of jewelry crafting in the late Renaissance period, from the 16th to 17th centuries, in western European countries, such as France, Spain, Netherlands, Bavaria and Florence. Florence in Italy was a important center of jewelry designing during this period, where the renowned sculptor and goldsmith, Benvenuto Cellini lived and worked. One of the well-known sculptural pendants ascribed to this master craftsman was the Canning Jewel, which is today part of the collection of the Victoria Albert Museum.

The Triton Pendant believed to have been crafted in Italy, might also have originated in Florence, where the tradition of jewelry crafting had been maintained till modern times. The probable period of origin of the pendant believed to be the mid 1800s, corresponds with what is now known as the "Renaissance revival period," when the jewelry designs of the Renaissance period, made a brief come back. The "Renaissance revival period" started somewhere in the mid-1800s, but peaked in the 1860s and 1870s, during the mid or high Victorian period, also known as the Grand Period, because of the grand way in which gemstones and metals were used in the manufacture of jewelry. The discovery of gold in America and Australia, made available this precious metal in large quantities to jewelry designers, leading to the revival of ancient gold working techniques and designs, such as Etruscan, Egyptian, Classical and Renaissance styles.

The design of the jewel

The design of this sculptural jewel was inspired by the Greek mythological creatures, the Centaurs, a race of creatures composed of part human and part horse, usually depicted with the torso of a human joined at the waist to the horse's withers, where the horses neck would be. Centaurs are thought of in many Greek myths as wild as untamed horses, and were symbolic of chaos and unbridled passions. The conflict between Centaurs and Lapithae, two warring peoples who were cousins, due to their common ancestry from the sons of Ixion, is considered as a metaphor for the conflict between the lower appetites and civilized behavior in humankind, or a struggle between civilization and barbarism. In spite of the widespread belief in the existence of Centaurs in ancient times, a Greek philosopher in the first century B.C., Lucretius, denied their existence, based on a rational explanation comparing the growth rates of horses and animals. While at three years, when horses are in the prime of their life, humans are still little more than babies, making hybrid animals between the two impossible.

Characteristic of the jewel

A natural nacreous baroque pearl forms the torso of the Centaur, the Greek mythological creature who is half man and half horse. The baroque pearl has a length of 4 ins (10.2 cm) and circumference of 6 ins (15.2 cm), and is considered to be one of the largest such pearls in the world. The remaining parts of the Centaur, such as the head and the hands of the human part, and the body, four legs and tail of the horse, are made out of gold. Certain parts of the gold have been enameled, such as the region that looks like a saddle on the back of the horse, and the shoulders of the human part where the hands join the torso. The Centaur, which is represented in a galloping posture, has three of its hoofs touching the mount, while one of the front legs has been raised up, and does not touch the mount. 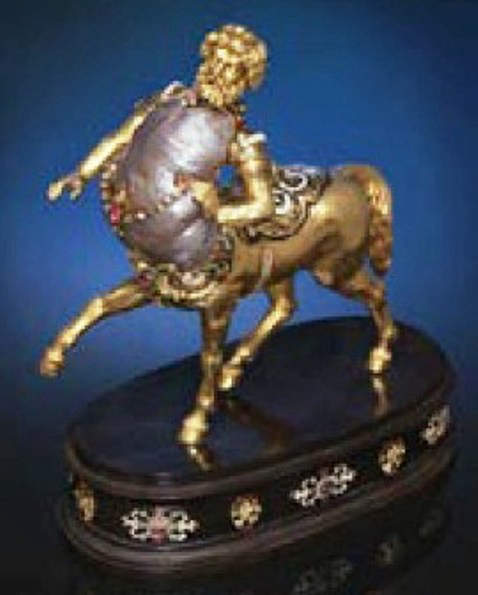 The possible country and period of origin of the Centaur

The Centaur belongs to the private collection of an European family, and was given on loan to the AMNH for its traveling exhibition. The period and country of origin of this sculptural jewel is not known, but according to our knowledge of such creations,  we know that it could be a piece of the late Renaissance period from the 16th to 17th centuries, or Renaissance revival period of the mid-19th century, from around 1840 to 1870. The country of origin could be any one of the west European countries, like France, Spain, Netherlands, Bavaria and Florence, where the art of producing such sculptural jewels were prevalent during these periods.

2) Sea Dragon Pendant in the Waddesdon Bequest at the British Museum.

1) Centaur - From Wikipedia, the free encyclopedia

3) History of Jewelry - Parts 1 to 6. www.jewelsforme.com