Sea Dragon Pendant in the Waddesdon Bequest at the British Museum

The Sea Dragon Pendant, based on the famous Renaissance designs for pendants, of dragons and sea horses, by the Bavarian goldsmith, jewelry craftsman and designer, Erasmus Hornick, gets its name from its monstrous shape like a sea dragon.

Such pendants designed in a variety of shapes, such as dragons, monsters, sea horses, dolphins, mermen, mermaids and other mythical creatures as well as naturalistic themes such as birds and mammals, became very popular in the late Renaissance period and were produced by jewelry craftsmen in many countries across Europe, such as Spain, Holland, France, Florence, Bavaria etc. Historical evidence gathered from portraits of the monarchy and aristocracy of the period show, that these pendants were worn in different ways during this period. A portrait of Anne of Habsburg, Queen of Spain, painted around 1570 by Anthonis Mor, show her wearing a Renaissance pendant closer to her throat like a choker. Another portrait of Lady Willoughby dated 1573, show her wearing a renaissance pendant on the cotiere on the breast. Portraits of Queen Elizabeth I, show her wearing renaissance pendants pinned to swing from her stiff sleeves.

The extraordinary designs of the Renaissance period were actually created to accommodate large irregular shaped baroque pearls, which apparently had no use and would not fit into any traditional jewelry designs. The most challenging task of the Renaissance jewelry craftsmen was to create a design that would accommodate the highly irregular shape of the baroque pearl, that was one of his raw materials. Usually, he combined the irregular baroque pearl with other gemstones such as emeralds, rubies and diamonds, as well as gold and enameling, to obtain the pre-conceived shape that bore fruit in his fertile imagination. The Sea Dragon Pendant, was one such creation of the Renaissance jewelry craftsmen, that provides strong evidence for their ingenuity, skill and inventiveness.

Characteristics of the pendant

The Sea Dragon Pendant in the Waddesdon Bequest displayed in Room No. 45 of the British Museum, is based on Erasmus Hornick's design for pendants, consisting of dragons and sea horses, that occurred in the engraved designs of the Bavarian goldsmith published in 1562. One of these designs show a dragon, a mythical monster like a giant reptile, fierce and frightening, in combat with a brave warrior, who is in the grip of its powerful claws, but later vanquished by the warrior by driving his spear through its widely opened mouth. The design also depicts the use of three drop-shaped pearls from underneath, to stabilize the envisaged pendant.

A second engraved design by Erasmus Hornick depicts Poseidon the God of the sea, earthquake and horses, in Greek mythology, astride his magnificent sea stallion, with a beautiful woman, possibly one of his rape victims, for Poseidon like his brother Zeus exerted power on women, objectifying masculinity. Poseidon is said to have fathered many children, after exerting his power on women, that resulted in offsprings like Triton, half human and half fish, Pegasus, the flying horse, Theseus, a king of Athens etc. This design also depicts the use of three drop-shaped pearls for stability.

The Sea Dragon Pendant, which undoubtedly was inspired by the above engraved designs of Erasmus Hornick, has as its centerpiece a large, irregular, rather grotesque baroque pearl, which occupies the oval-shaped body of the dragon. The baroque pearl appears like a conglomerate of smaller pearls, the outlines of each individual pearl still clearly visible. The baroque pearl is set in an enameled gold framework. The tail of the dragon at its point of origin from the body, is also set with another large baroque pearl. Four smaller spherical pearls, are also found in the region between the body and the tail, and above. The head and neck, the coiled tail, and the feet of the dragon are all made of enameled gold, in bright colors such as green, gold and brown. The sea dragon is suspended by two gold chains from a point above, a longer chain carrying three pearls attached to the tail, and a shorter chain carrying two pearls, attached to the head. A third chain carrying two pearls hangs freely and vertically from the point of suspension, and is not attached to any point on the monster. A somewhat drop-shaped baroque pearl hangs from underneath the sea dragon, serving a stability function, as intended by the designer Erasmus Hornick. The description so far is that of the Sea Dragon Pendant as seen from one side.

From the other side the Sea Dragon Pendant looks slightly different, as the large baroque pearl that forms the body of the dragon is not visible, as it is covered by enameled gold. On this side the enameled gold is set with emeralds. However, the baroque pearl on the tail is still visible. Four other smaller spherical pearls are placed in the region between the body and the tail, corresponding to the positions of the four spherical pearls on the other side. The same drop-shaped baroque pearl hanging from underneath the sea dragon, is still visible, though the view is from the rear.

History of the Sea Dragon Pendant

The origin of the Sea Dragon Pendant

The shape and features of the Sea Dragon Pendant, though inspired by Erasmus Hornick's engraved designs, was not a creation of the renowned Bavarian goldsmith, but probably one of his contemporaries based in Bavaria during the Renaissance period. It is believed that the Sea Dragon Pendant probably originated around 1575 in Bavaria, and later entered the collection of jewelry of an aristocratic family in Austria, Baron Rothschild, who later settled in Britain.

Baron Ferdinand de Rothschild (Ferdinand James von Rothschild), who was a member of the powerful  Rothschild banking dynasty of 19th century Europe, was a renowned English politician, and a connoisseur and collector of art works. The Rothschild banking family has its roots from the Jewish quarters of Frankfurt, Germany. The founder of the family, Mayer Amschel had five sons, who set up a banking network in the five major financial centers of Europe in the 19th century - London, Paris, Frankfurt, Vienna and Naples. Their businesses prospered, and the Rothschild family became one of the wealthiest and most powerful families in European society. 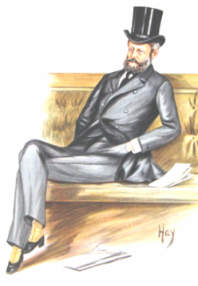 Baron Ferdinand de Rothschild was a descendant of the Austrian branch of the Rothschild banking family based in Vienna. He was the second son of Baron Anselm von Rothschild (1803-1874), and held the hereditary title Freiherr (Baron) in the Austrian nobility. He received his higher education at the Cambridge University, where he developed a personal relationship with the Prince of Wales, that eventually led to his acquiring British citizenship and the migration of his family from Vienna to London. He married his cousin Evelina de Rothschild, on June 7, 1865, but unfortunately lost her the following year at the time of childbirth. In 1883, Ferdinand de Rothschild was appointed to the office of High Sheriff of Buckinghamshire. In the year 1885, he entered British politics and was elected as a Liberal MP for the constituency of Aylesbury, a seat which he held until his death in 1898.

Both Ferdinand de Rothschild and his father Anselm von Rothschild were great connoisseurs and collectors of art, and developed a special liking towards the collection of art objects that originated during the Renaissance period in Europe. Their collection was clearly intended to rival those put together by rulers and princes from the Renaissance onwards. Eventually they built up a collection of nearly 300 precious art objects from Renaissance Europe, that included masterpieces of goldsmith's work, painted enamels, glass and ceramics, sculpture and small carvings in wood. The Sea Dragon Pendant was one such Renaissance jewelry piece that entered the Rothschild's collection.

In 1874, Ferdinand acquired an estate in Buckinghamshire, near the village of Waddesdon, and on this estate built the renowned Waddesdon Manor, to display his outstanding collection of art treasures. His fascination for Renaissance period art and architecture was again brought to the fore when he commissioned a French Architect, Gabriel-Hippolyte Destailleur to build a Renaissance style chateau, based on the chateaus in the Loire Valley.  He also engaged the services of a French landscape designer Elie Laine to do the lay out of the grounds, and the gardens were enhanced with pavilions, statuary and an aviary. The Waddesdon Manor was completed in the year 1889. 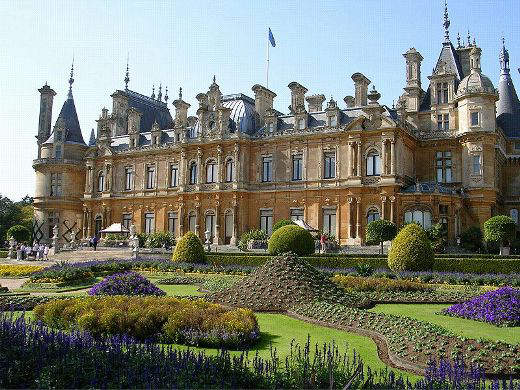 Baron Ferdinand used the Waddesdon chateau both as a weekend retreat outside London, where he held his famous house parties, and also to house and display his extensive collections of French 18th century tapestries, boiseries, furniture and ceramics, English and Dutch paintings and Renaissance works of art. The Waddesdon Manor not only became famous for its Renaissance architecture and the art treasures that it housed, but also the latest electric lighting in the house including the newly designed chandeliers, lifts and under-floor heating.

When Baron Ferdinand died in 1898, his collection of Renaissance works that included the Sea Dragon Pendant was bequeathed to the British Museum as the "Waddesdon Bequest." The bequest is a collection of nearly 300 precious art objects from Renaissance Europe, that is displayed today in Room 45 of the museum. However other works of art from various other periods and countries still remained at the Waddesdon Manor.

Waddesdon Manor after the death of Baron Ferdinand 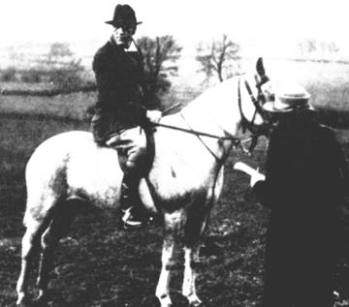 In the year 1957, when James Armand de Rothschild died, he bequeathed Waddesdon Manor and its collections and the surrounding garden of 200 acres in extent, to the National Trust, together with an endowment of Â£750,000. His widow Dorothy de Rothschild occupied a nearby house that was previously occupied by Alice de Rothschild. She took a keen interest in the management of Waddesdon Manor for the rest of her long life. Today, the Waddesdon Manor is run by a family charitable trust chaired by the 4th Lord Rothschild, Jacob Rothschild. The family trust had also overseen a major restoration program and acquired new collections, and added new features and displays to both the house and the gardens.

Other Renaissance pendants displayed at the British Museum

Apart from the Sea Dragon Pendant in the "Waddesdon Bequest" the British Museum also houses one of the largest collection of such Renaissance pendants turned out by jewelry craftsmen and artisans of this period from a host of nations such as Britain, France, Bavaria, Florence, Spain, Netherlands and Hungary. These Renaissance pendants are based on popular themes of the period, such as sea dragons and monsters, hippocampi, mythical horses with fish tails, mermaids, mountain steeds, rams, the Lamb of God,  and Venus and Cupid. Most of these pendants incorporate baroque pearls as a component, apart from other gemstones such as emeralds, diamonds rubies etc, and make use of gold and colored enameling, and are usually hung by gold chains.