The Shah diamond gets it's name from the former rulers of the Nizam Shahi dynasty of the Kingdom of Ahmednagar, who ruled the Deccan State in west central India, between Gujarat and Bijapur, from 1490 to 1633. The founder of the dynasty was Malik Ahmed Nizam Shah, but one of the three names engraved on the diamond in Arabic characters is that of Burhan Nizam Shah II, the second in succession to the founder. The inscription reads,"BURHAN NIZAM SHAH II, YEAR IOOO A.H."Year 1000 (After Hijra) in the Islamic Calendar, is equivalent to 1591 A.D. in the Gregorian Calendar. 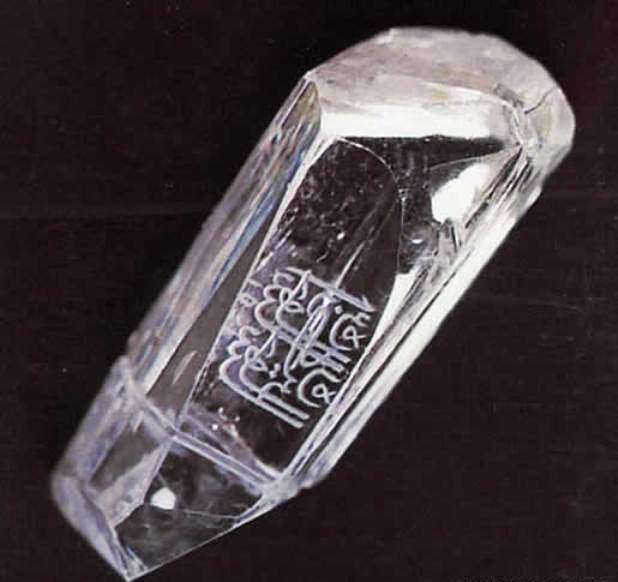 The Shah diamond is an 88.7-carat, table-cut (lasque), yellow colored diamond of exceptional clarity, without the least cloud or flaw, so pure that the cutter of the diamond was able to leave several of the natural facets intact. Thus the cutting process resulted only in a very small loss of weight. The original rough stone is said to have weighed about 95 carats, and the finished stone weighed 89 carats, resulting in a loss of only 6 carats at the cutters hands. The three facets obtained by cleavage are beautifully engraved in Arabic characters with the names of three rulers. The Shah diamond, along with the diamond "Jehangir Shah", holds the rare distinction of being the only engraved diamonds that originated from India. The diamond being part of the Kremlin Diamond Fund presently, has never been assessed for color, clarity, weight, and other characteristics. 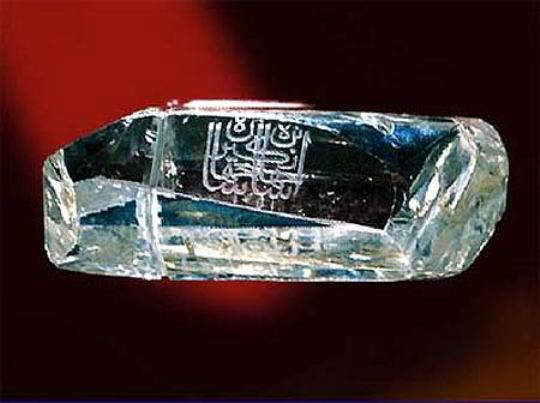 Being a yellow diamond, the Shah diamond must in all probability be a type Ia diamond, which constitute almost 98 % of all naturally occurring diamonds. In type Ia diamonds Nitrogen atoms occur as aggregates of 2, 3, or 4 atoms. Aggregates of 2 or 4 atoms do not affect the color of the diamonds, but aggregates of 3 atoms do. Such aggregates are known as N3 centers, and absorb visible light in the blue end of the spectrum, giving rise to yellow colors, ranging from pale to medium, depending on the concentration of N3 centers. Usually aggregates of 2, 3, and 4 atoms are found together and these diamonds belong to the sub-group Type IaAB.

Going by the first inscription on the diamond dated 1591 A.D. the diamond appears to be a stone of the latter half of the 16th century. Around this time the Golconda mines had gone into active production, and the Shah diamond might have originated in these mines, reputed for their high quality diamonds. The stone eventually found it's way to the Shah Court of Ahmednagar by the end of the 16th century.

Ahmednagar was occupied by the forces of the Great Mughal Emperor Akbar the Great (1556-1605), in 1600, and the Shah diamond was seized, and found it's way to the court of the great emperor at Agra. After Akbar's death in 1605, the diamond was inherited by his son and successor Jehangir (1605-27), and then passed down to Emperor Shah Jahaan (1628-58) in 1628. When the diamond was in Shah Jahaan's court, he ordered the carving of a second inscription, "THE SON OF JEHANGIR-SHAH JAHAAN, YEAR 1051 A.H."This is equivalent to 1641 A.D. 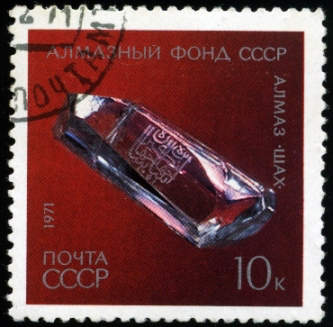 Shah Jahaan's son Aurangzeb got the diamond mounted at the top of his throne, and surrounded it with rubies and emeralds. The diamond then passed down a series of not-so-famous Mughal emperors, whose reigns were short-lived. They include Bahadur Shah (1707-12), Jahandar Shah (1712-13), and Farrukh Siyar (1713-19). Finally the stone was inherited by Muhammad Shah (1719-48).

During the reign of Muhammad Shah in 1739, Nadir Shah, the great Iranian ruler and conqueror, invaded northern India with the sole intention of plundering it's wealth. Nadir defeated the Mughal army at Karnal in February 1739, and took emperor Muhammad Shah prisoner, and later marched into Delhi. He sacked Delhi and Agra, and eventually when his army left Delhi in May 1739,carried with them a booty estimated at 70 crores (700 million Rupees). The value of the plundered wealth was so enormous that Nadir Shah was able to exempt the people of Iran from taxes for at least 3 years.

When Nadir Shah was assassinated by his own troops in 1747, most of his treasures were plundered by his revolting troops, and it is believed that the Shah diamond was among them.

After Nadir Shah's death, the Iranian State split up into three smaller states, one headed by his blind grandson Shah Rukh, with capital at Mashhad, a second headed by one of his Qajar Chiefs Muhammad Hassan Khan Qajar with capital at Mazanderan, and the third headed by another general Muhammad Karim Khan Zand of the Zand Dynasty, with the capital at Shiraz.

Each of the above rulers must have laid their hands upon part of the treasures of Nadir Shah. By 1796 out of the three smaller states, only the state ruled by the Qajar dynasty prevailed, and it's leader Agha Muhammad Khan Qajar , had captured the remaining two states, and brought the entire country under his rule.

Shah Rukh, the grandson of Nadir Shah was arrested and forced to surrender all the treasures acquired from Nadir Shah, which finally resulted in his death. The treasures re-assembled by Agha Muhammad Khan included besides the Shah diamond, other famous diamonds such as the Darya-i-Nur, the Nur-ul-Ain etc. From Agha Muhammad Khan, the treasures passed down to Fath Ali Shah, who ruled between 1797 and 1834. It was Fath Ali Shah who ordered the engraving of the third name on the Shah diamond-"THE RULER OF THE QAJAR-FATH ALI SHAH SULTAN-YEAR 1242 A.H.(1829 A.D.)

Fath Ali Shah, appointed his son Abbas Mirza as Crown Prince and Governor of the province of Azerbaijan in 1798. Later he was appointed commander of the Iranian Army, and led a force of 30.000 men against the Russians in 1804. The war resulted in defeat for the Iranians in 1813, and the loss of the province of Georgia to the Russians. Abbas Mirza re-organized the Iranian army with the help of the British Military advisers, and led his forces against the Russians for a second time in 1826. In the first year of the war he was able to re-capture all of Iran's lost territory. However eventually the Russian forces triumphed, due to numerical superiority, and discipline, and refusal of Fath Ali Shah to reinforce and replace Abbas Mirza's losses. When the war ended in 1828, Iran lost the Caucasus to Russia, and Russian commercial and consular agents were granted access to Iran.

Following the normalization of relations between the two countries, Diplomats were exchanged and took up residence in each others capitals. Then in 1829, the Russian Diplomat and writer Alexander Sergevich Griboedov was murdered in Teheran, the capital city of Iran. The Russian Government demanded severe punishment for those responsible for the murder. Fath Ali Shah then sent a delegation led by Abbas Mirza's son, Hosrov Mirza (Cosrhoes) to St. Petersburg, to meet and apologize to the Emperor of Russia, Czar Nicholas I, over the unfortunate death of the diplomat. During this visit Hosrov Mirza also presented a valuable gift to the emperor from the ruler of Iran, Fath Ali Shah. This gift was none other than the valuable diamond the "Shah Diamond". This is how the Shah Diamond entered the collection of the Kremlin Diamond Fund.

The diamond is presently part of the collection of the Kremlin Diamond Fund, which also includes other historical diamonds such as the Orlov Diamond (189.62 carats), the Flat Portrait Diamond (25 carats), The Creator (298.48 carats), Alexander Pushkin (320.65 carats) and the Congress of CPSU (342.50 carats).