Shah Jahan Diamond gets it's name probably from the strong resemblance of the diamond to an Octagonal shaped diamond in the turban ornament of a portrait of the Great Mughal Emperor Shah Jahaan, who reigned between 1628 and 1658. Shah Jahaan's court was one of great pomp and splendor and his collection of jewels was probably the most splendid in the world. He was also a patron of the arts, and literary activities, painting, and calligraphy flourished during his reign. Above all Shah Jahaan had an insatiable passion for building. He built two great mosques in Agra, the Moti Masjid and the Jami Masjid, and the world renowned mausoleum in memory of his favorite Queen Mumtaz Mahal-the Taj Mahal. He also built in Delhi a huge fortress-palace complex called the Red Fort and the Jami Masjid, which is among the finest mosques in India today. 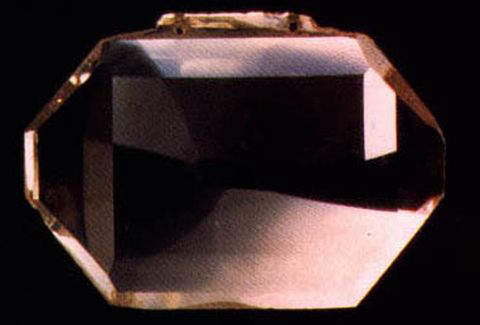 The diamond is a light pink, table-cut stone, with a weight of 56.71 carats and dimensions of 44.6 x 33 x 3.6 mm. The clarity of the diamond is also exceptional in keeping with the characteristics of diamonds originating from the Golconda mines. The table-cut diamond is also technically known as Lasque.

A unique feature of the diamond, which identifies it as a gem of the Mughal Court, is the presence of a pair of drilled holes on opposite ends of the stone, which enabled the stone to be sewed on to a turban or a garment of the emperor in order to impart pomp or courtly fashion. The origin of the diamond is without any doubt the Kollur mines of Golconda, in Southern India, considering the period in which the stone made it's first appearance- pre-18th century- when the only source of pink diamonds in the world was the Golconda mines of southern India. Moreover the color and clarity of the stone is very characteristic of pink diamonds that originated in these mines.

Jean Baptiste Tavernier, the famous French traveler and diamond dealer who visited India on six occasions in the 17th century, reports in his book "Travels in India ", that he had the opportunity of seeing a very rare pale pink, enormous diamond of more than 400 carats, which he referred to as "Diamanta Grand Table", the "Great Table Diamond". The whereabouts of this diamond is unknown, but it is believed to have been cut and fashioned into two or more diamonds along the course of history. Diamond historians had all along been interested in identifying the diamonds that originated from the "Great Table Diamond."Pink diamonds being exceptionally rare, the number of historically famous pink diamonds of Indian origin were also few, so much so that the tendency of diamond historians to equate any historic pink diamond of Indian origin, with the missing "Great table diamond"has always been very great. Even the Shah Jahaan diamond had been identified with the missing "Great Table Diamond". The only expert opinion concerning the identity of the "Great Table Diamond" comes from Iran, when in 1965, a team of Canadian experts from the "Royal Ontario Museum" conducted research on the Iranian Imperial Jewels, and postulated that the Darya-i-Nur weighing 186 carats is the major portion of the "Great Table Diamond", the other part being transformed into the oval pink 60-carat brilliant, known as the Nur-ul- Ain.

The Shah Jahaan table-cut is more appropriately equated with another pink table-cut diamond, that weighed 60 ratis (about 54 carats), shown by the last of the Great Mughal Emperors Aurangzeb, son of Shah Jahan, to Jean Baptiste Tavernier, in 1665. This stone correlates very well with the Shah Jahaan diamond, in respect of shape, cut, clarity, color and weight.

The Shah Jahaan diamond like many other famous Mughal diamonds such as the Koh-i-Nur, the Darya-i-Nur, Nur-ul-Ain, the Shah diamond, etc. left India in 1739 after the sacking and plunder of Delhi and Agra by the invading forces of Nadir Shah the ruler and conqueror of Persia.

The course of migration of the diamond from Persia to a country in Europe is only a matter of speculation. However the long lost Shah Jahaan diamond suddenly made it's appearance at an auction at Christie's in Geneva in 1985, but was withdrawn from the sale as it failed to realize it's reserve.

Nothing has been heard about the diamond after it's last appearance at Christie's in Geneva in 1985. The present whereabouts of the diamond is unknown.

List of the famous pink diamonds arranged in descending order of carat weights.