The 20.17-carat emerald-cut blue diamond is the property of Siba Corporation - Hong Kong branch, and was purchased at a Sotheby's auction in New York in October 1994. The diamond was unnamed at the time of purchase and perhaps remain so up to now. 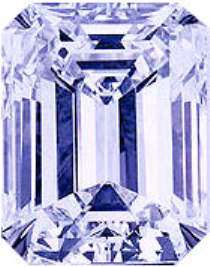 This unnamed blue diamond is undoubtedly a Type IIb diamond, in which the blue color is caused by trace quantities of boron impurities present in the crystal. Boron is an element whose atomic size is comparable to that of carbon, and therefore can be easily accommodated in the diamond crystal structure made up of carbon atoms. The presence of boron also imparts semi-conducting properties to the crystal, which is normally non-conducting. However the occurrence of Type IIb diamonds is only 0.1 % of all naturally occurring diamonds. In fact the occurrence of blue diamonds may even be much less than this percentage. It is said that only one significant blue diamond is mined out of the total production of gem-quality rough diamonds in the Premier Diamond Mines every year. To put together the eleven exceptional quality blue diamonds of the De Beers Millennium Diamond Collection, that was exhibited in the Millennium Dome throughout the year 2000, it took the company around ten years. This gives an indication as to the extreme rarity of their occurrence.

The early history of the diamond such as the country of origin, the mine of origin, weight of the rough stone, original owners of the diamond, persons involved in the cutting etc. are not known. But, being a new diamond that made its first appearance in 1994, in all probability this blue diamond must have originated in the Premier Diamond Mines of South Africa, the only known consistent source of blue diamonds of significant size in the 20th century.

The October 1994 Magnificent Jewelry Auctions conducted by Sotheby's which netted $ 33.4 million was the highest total for a New York jewelry sale since 1988, and the highlight of this record-breaking auction was the sale of the 20.17-carat fancy blue emerald-cut diamond which fetched a record-breaking price of almost $ 10 million.

At these auctions 84% of the pieces were sold by lot and 88 % by dollars, a strong indication of the strength of the auctions. An auction observer and author Antionette Matlins said, "The excitement at Sotheby's was tangible, and bidding was aggressive and healthy."John Black, executive vice-president and director of Sotheby's New York, jewelry and precious objects division said, "I haven't felt such strength in three years from the American market. It has really been extraordinarily strong. There was intense Asian bidding, but I was surprised by the strength of the American buyers."

Highlight of the sale

The highlight of the four-day auction which brought in almost one-third of the total amount netted was the 20.17-carat, emerald-cut, fancy blue diamond, said to be the most important blue diamond ever offered at an auction, which fetched an astounding $ 9.9 million. This was said to be the highest ever price paid for a fancy blue stone, and the third highest price ever paid for any stone at an auction. As the sale got on there was initial squabbling between contenders as to the increments by which the bidding should go up each time. This eventually led to a bidding war between two leading contenders, Sheik Ahmad Hassan Fitaihi and Sam Abram. At one point when Sheik Fitaihi pronounced a bid of $ 8 million, Sam Abram thought it was a joke. But, it wasn't. The bidding continued from that point and it became fiercer and fiercer. Both contenders were not willing to give in, and the price of the diamond rose dramatically. Finally when the price reached $ 9.9 million Sheik Fitaihi dropped out and the hammer was brought down in favour of Sam Abram, who purchased the diamond on behalf of the Hong Kong branch of his company, American Siba.

After the auctions Sam Abram told reporters that he was prepared to go much further than $ 9.9 million had the bidding continued. He said that it was the best blue stone that had ever been offered. He further stated that his immediate plan was to re-cut the diamond and clear up the imperfections, but declined comments when asked if he would re-sell it.

Other items sold at the auction

2) A 63.95-carat pear-shaped anniversary diamond with color grade of K and clarity of VS-2, set as a platinum pendant, sold to Sheik Ahmad Hassan Fitahi for $ 965,000.