The single-row natural pearl and diamond necklace was Lot No. 156 at the Christie's Contemporary Jewelry and Watches Sale, No. 7664, held at the Jumeirah Emirates Towers Hotel, Dubai, United Arab Emirates, on April 29 2008. The necklace was one of the seven lots out of 15 lots of pearl jewelry offered at the sale, that registered a price higher than the upper pre-sale estimate, indicating the strong auction market for natural pearl jewelry. a trend that started at the turn of the new millennium, and is still continuing. 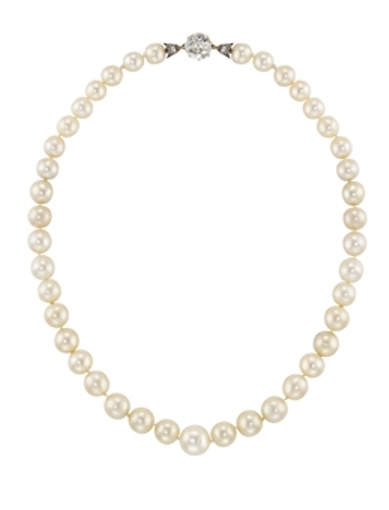 Characteristics of the natural pearl and diamond necklace

The necklace appears to be a choker

The single-row necklace comprising of 41 natural pearls appears to be a choker, whose length varies between 14-16 inches (35.5-40.5 cm) under the modern system of classification of pearl necklaces, based on their lengths.

The size and shape of the pearls

The color of the pearls are white with a yellowish overtone. White is the body color of the pearls and yellow the overtone color. The pearls may be appropriately described as yellowish-white. White body color is associated with the absence of colored pigments in the nacre, usually combined with conchiolin. The conchiolin being transparent allows the white color of aragonite to show through. Overtone colors are an optical effect caused as light passes through successive layers of aragonite. The luster and orient of the pearls are characteristic of saltwater pearls. Luster is caused by the reflection of light from the surface and just below the surface of the pearl. The luster of saltwater pearls is greater than that of freshwater pearls. The orient or iridescence of a pearl is caused by refraction of light as it passes through successive layers of aragonite. All four characteristics, color, overtones, luster and orient are dependant on the thickness of the nacre, which is usually the highest for natural pearls, being composed of 100% nacre.

The clasp of the necklace is the only part in the necklace that incorporates diamonds. There appear to be three diamonds on the clasp, The largest diamond occupying the center of the clasp, has a round girdle, and looks like a modern round brilliant, but is actually an old-European cut diamond, because of its smaller table. The bell cap like arrangements on either side of the old-European cut diamond, appears to be mounted with a table-cut diamond. The metal used on the clasp appears to be yellow gold.

The history of the natural pearl and diamond necklace

The natural pearl necklace is probably of 19th-century origin

Nothing is known about the historical provenance of the necklace, or the identity of the owner who put it up for auction. But, given the fact that the necklace is a natural pearl necklace, and the clasp incorporates an old-European cut diamond, which was first introduced in the 19th century, seem to indicate that it originated in the 1800s. To find a natural pearl necklace that originated in the 20th-century, unless they are South Sea pearls, is extremely scarce, as most of the traditional sources of natural pearls in the world were exhausted by the early 20th-century, or were abandoned after the introduction of cultured pearls into the markets, by the Japanese in the 1920s and 1930s.

The probable source of the pearls is the Persian Gulf

The color and range of size of the pearls can give an indication as to the saltwater oyster species from which the pearls in the necklace originated. The yellowish-white color of the pearls indicate that the species of oyster from which the pearls originated, is none other than the most prolific pearl producer in the history of the industry, Pinctada radiata (Pinctada imbricata), whose pearls are white or yellow, with overtones of silver, cream or pink. The range of size of the pearls, 6.8-10.2 mm also falls within the range of size of pearls produced by Pinctada radiata, although this oyster species is also renowned for the production of seed pearls. Thus, the possible sources of the pearls are the Persian Gulf, the Red Sea and the Gulf of Mannar, the hub of the international pearl industry since ancient times. Venezuela is also an alternative source, but the pearl banks of Venezuela were exhausted in the mid-17th century. Thus, the most probable source is the Persian Gulf, where the  natural pearl industry survived until the 1920s, and pearls of yellowish hue were more common. The natural pearl industry of the Gulf of Mannar was abandoned in 1906, due to overexploitation. Pearls of the Gulf of Mannar were commonly silvery-white, and yellowish-white hues were less common.

A laboratory report bearing No.0127993, dated February 29, 2008, issued by the Gem Testing Laboratory of Great Britain, authenticates the natural provenance of the pearls in the necklace, an important document to gain the confidence of prospective bidders, in a region where there is a strong auction market for natural pearls and jewelry incorporating natural pearls.

The sale of the natural pearl and diamond necklace

The single-row natural pearl and diamond necklace that came for auctions at the Christie's Contemporary Jewelry and Watches Sale in Dubai, was Lot No.156, and had pre-sale estimate of $150,000 to $180,000 placed on it. However, after a keenly contested bid, the necklace was eventually sold for $205,000, which was $25,000 more than the upper pre-sale estimate. Fifteen lots of pearl jewelry was offered for sale at this auction, and seven lots sold for more than their upper pre-sale estimate; the remaining 8 lots registering prices within the estimated range. The record for the auction was created by Lot No 178, a superb four-row natural pearl and diamond necklace, which sold within the estimated range of $1.8 to 2.2 million, for $1,743,400. The second highest price was recorded by the Umm Kulthum's nine-row Satlada necklace, which sold for $1,385,000, twelve times higher than the upper pre-sale estimate of $120,000. The enhanced price in this case was no doubt for the historical provenance of the pearl necklace, owned once by the Late ruler of the UAE, His Highness Sheik Zayed Bin Sultan Al-Nahyan and later by the legendary Arab singer, Umm Kulthum, who wore the necklace often for her public performances. The present record for a natural pearl necklace is held by the 68-pearl, double-strand, natural, pearl necklace, the Baroda Pearl Necklace, which was sold for $7.096,000, at an auction in April 2007.