The name refers to an extremely rare single-strand natural pearl necklace, consisting of 41 spherical and near-spherical, large, white pearls, without a clear-cut provenance, but believed to be from a noble collection, which appeared at the Sotheby's Magnificent Jewels Sale, held in Geneva, on November 19, 2008, and set a fairly impressive price of US$ 1.3 million, in spite of the ongoing global economic recession precipitated by the credit crisis, reflecting the strength of the confidence placed by collectors on rare collectibles, despite the economic uncertainty.

Characteristics of the  Pearl Necklace

The necklace has a length of approximately 48 cm, which is equivalent to 18.9 inches. Accordingly, under the modern system of classifying pearl necklaces based on the length of the strand, the necklace falls under the category of a "Princess" which has a range in length from 17 -20 inches. See table below :-

Modern system of classifying pearl necklaces based on length

Arrangement of the pearls in the necklace

The necklace consisting of 41 large natural pearls has an arrangement of 20 - 1 - 20, which means there is a single large median pearl, with 20 pearls situated on either side of it. The median pearl, which is the largest pearl on the strand, is a perfectly spherical pearl, and the 20 pearls on either side of it appear to be graduated, decreasing gradually in size towards the clasp. Even though Sotheby's auction catalogue does not mention of any spacers between the pearls, close-up photographs of the necklace clearly show what looks like "rondelle" spacers between the pearls, that keeps them apart throughout the necklace. 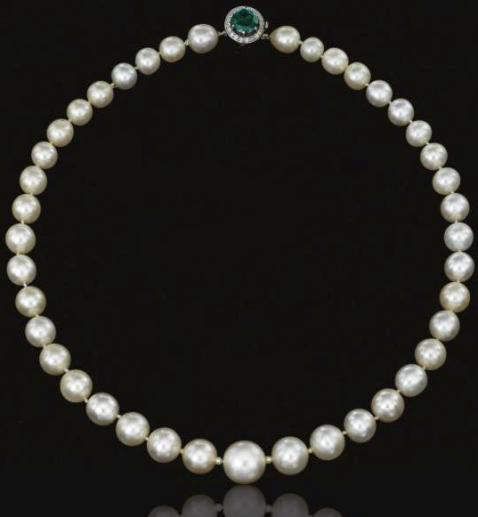 The clasp of the necklace is circular and is mounted with a faceted, circular-cut emerald, with its characteristic dark-green color, surrounded by a border of around 20-24 single-cut, white (colorless)  diamonds.

A combination of desirable characteristics in the pearls, such as appropriate size, shape, color, overtone, orient, luster and surface quality, makes this single strand natural pearl necklace, a rare and magnificent specimen and a much sought-after collector's item, that fetched a premium price of US$ 1.3 million at the auctions.

Size of the pearls

The 41 pearls in the necklace has a range in size of 8.5 mm to 14.7 mm. Thus the largest pearl in the necklace, which is the median pearl, has a diameter of 14.7 mm. The size range of 8.5 mm to 14.7 mm, is equivalent to a weight range of 17 grains to 90 grains, according to the conversion table given in chapter 4 of Kunz & Stevenson's book, "The Book of the Pearl." See table given on webpage "Nine-Strand Natural Pearl Festoon Necklace."

The size range of 8.5-14.7 mm appears to conform, to the size range of South Sea pearls produced by the pearl oyster species Pinctada maxima, which can vary from 9-20 mm, with an average size of around 13-14 mm.

Weight of the pearls

Thus, the total average weight of the pearls in the necklace = 88 grams.

Shape of the pearls

The median large pearl appears to be a perfectly spherical pearl, however, a careful examination of the rest of the pearls in the necklace, show that most of the pearls are not spherical, but near-spherical, button-shaped, oval, slightly baroque, and somewhat pear-shaped as the two pearls closest to the clasp. The variety of shapes in this necklace is a strong evidence for the natural credentials of the necklace, as regular shapes are more frequent only among cultured pearls. 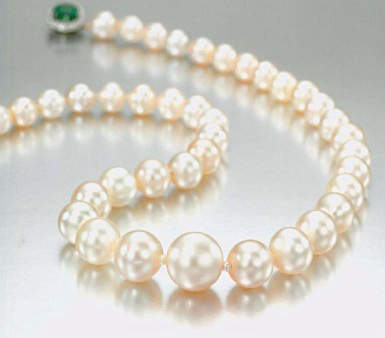 Color, overtone and orient of the pearls

The color of the pearls appear to be white in photographs of the necklace in which the background is black. In other photographs in which the background is white, the pearls appear to have a silvery-white body color, with a soft-pink overtone. The white body color is caused by the absence of any pigments, that usually combine with the conchiolin part of nacre, which allows the white color of aragonite to show through. Iridescence (orient) and overtone colors are optical effects caused by the refraction of light as it passes through successive layers of aragonite and conchiolin in the nacre. The silvery-white color is probably caused by iridescence and the soft-pink color is an overtone color.

Luster of the pearls

Luster or brilliance of the pearls is caused by reflection of light from the surface and just below the surface of the pearl. Like color, overtone and orient, luster is also dependant on the thickness of the nacre. The pearls being natural and made almost 100% of nacre, all these properties are at an optimum level in these pearls.

Surface quality of the pearls

Apart from the brilliance of the pearls, they also have an exceptional surface quality, being smooth and apparently blemish-free.

History of the Necklace

Source of the pearls in the necklace

The species of pearl oyster that produced the pearls

The natural habitat of Pinctada maxima is the South Sea, and hence the pearls produced by them are known as South Sea Pearls. The South Sea lies between the southern coast of China and the northern coast of Australia, and connects the Indian Ocean to the Pacific Ocean. The Indonesian Archipelago, Malaysia, Philippines and Papua New Guinea lie within this sea. A cultured pearl industry based on both varieties of Pinctada maxima, the silver-lipped pearl oyster and golden-lipped pearl oyster, has developed in many countries of the region with a coastline on the South Sea, such as Australia, Myanmar, Philippines, Indonesia, Malaysia and Thailand.

Is China a possible source of the pearls?

However, before the culturing of South Sea pearls began in the mid 20th-century, the research being pioneered by Japan and Australia, the harvesting of natural South Sea pearls in the region, took place only in a few countries, such as China and northern and western Australia. In China, the species seem to have been exploited since ancient times, producing some very famous pearls, such as the 575-carat Arco-Valley Pearl, the largest South Sea blister pearl on record; the 127.5-carat (510-grain) Imperial Hong Kong Pearl, an irregular drop-shaped pearl, and the 600-carat garden egg shaped Pearl of Asia, the largest natural nacreous pearl in the world.

Australia another possible source of the pearls?

However, systematic exploitation of the oyster beds containing Pinctada maxima, first took place off the coast of western Australia, mainly for its mother-of-pearl, in the 1860s, after the arrival of pioneer settlers in the area, who made use of experienced Aboriginal pearl shell harvesters for the task in the Nickol Bay. After intensive exploitation of this area for the mother-of-pearl shells and the occasional South Sea pearls, the settlers progressively migrated towards the north, until they reached Roebuck Bay in Broome, which by the end of the 19th-century became the largest producer of mother-of-pearl shells in the world. The by product of this massive mother-of-pearl industry was the large natural South Sea pearls, which entered the pearl markets of Europe and the United States. It's possible that the South Sea pearls in this necklace, also originated in the pearl beds off the coast of western, northwestern and northern Australia, during the period the mother-of-pearl industry existed in this region from the 1860s to the 1950s. It is difficult to pin point a definite period, but in all probability the pearls  must have been discovered during the height of production of mother-of-pearls in Broome towards the end of the 19th century and beginning of the 20th-century.

Did the lack of a clear-cut historical provenance have a bearing on the final price realized for the necklace at the auction?

Except for the fact that the single-strand natural pearl necklace was part of the property of a British noble family, the detailed provenance of the necklace is not known. This might have had a bearing on the final price realized by the necklace at the auctions, as experience has always shown that the value of the provenance is sometimes double or treble the actual value of the piece of jewelry. Yet, the necklace managed to record an impressive US$ 1.3 million at the auctions, held on November 19, 2008, in spite of the on-going global recession and credit crisis at the time. The price realized was just above the lower pre-sale estimate of 1,500,000 CHF (US$ 1,223,000) which probably shows that the value realized only includes the actual value of the necklace. The upper pre-sale estimate for the necklace was 3,000,000 CHF (US$ 2,446,000) which it failed to achieve.

The single-strand pearl necklace fetches the second highest price at the auctions, a position which it shares with an extremely rare pink diamond ring, indicating the par values of rare diamonds and rare natural pearls

The single-strand pearl necklace was Lot No. 432 at the Sotheby's Magnificent Jewels Sale, held at Geneva, on Wednesday, November 19, 2008. The lot was referred to as a "Magnificent and  Extremely Rare Natural Pearl, Emerald and Diamond Necklace," and was accompanied by a Lab Report bearing No.0128268 issued by the Gem Testing Laboratory of Great Britain, stating that the pearls were all natural, and a second report by SSEF (Swiss Foundation for the Research of Gemstones) bearing No.52369 stating that the 41 pearls were all natural. A pre-sale estimate of 1,500,000 - 3,000,000 CHF ( US$ 1.223 - 2.446 million) was placed on the necklace. The necklace was sold for 1,594,500 CHF equivalent to US$ 1.3 million dollars approximately, which was within the pre-sale estimated range. The price of US$ 1.3 million was the second highest price recorded at the sale after the highest price of US$ 3.5 million recorded by the extremely rare Kashmir sapphire. Another lot in the sale (lot 408), a ring set with an 8.02-carat fancy pink diamond, one of the rarest of colors among diamonds coincidentally fetched the same price as the single-strand  natural pearl necklace, US$ 1.3 million; a clear indication of the value of rare natural pearls, which was on par with the value of rarest diamonds.

Commenting on the auctions, Sotheby's Jewelry Chairman for Europe and the Middle East, David Bennett said, "The pearl market continues to strengthen even in these difficult times. It is fascinating how much interest these superb examples attracted during this sale. Jewelry sought after by collectors seemed to be unaffected by the global economy. Presumably that's because serious collectors felt they would lose the opportunity to purchase rare items if they chose to sit out the auction."

The Book of the Pearl - Kunz & Stevenson.  Chapter 4 : Structure & Forms of Pearls.