The Spoon-maker's diamond also known as the Kasikci Elmasi in the Turkish language, is the renowned diamond of the Topkapi Palace Museum associated with the former Sultans of the Ottoman Empire. The stone gets it's name from the tradition that the diamond was acquired by a spoon- maker in exchange for three spoons from a poor fisherman, or that the person who first found the diamond was a spoon-maker. Another possible source for the name is that the diamond resembled the shape of a spoon. 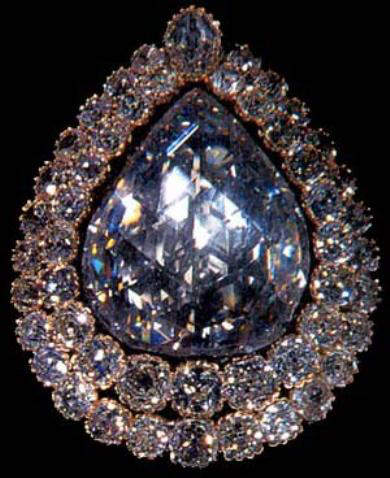 The diamond is an 86-carat, pear-shaped, D-color stone, mounted as the center piece of a special setting in the museum, surrounded by two rows of 49 old mine-cut diamonds. This extraordinary setting highlights the beauty of the diamond, giving it the appearance of a full moon surrounded by stars, lighting the night sky. The whole setting hangs in a glass case on the wall of one of the rooms in the treasury

Being a D-color diamond, the Spoon-maker's diamond is a Type IIa diamond, which constitute about 1-2 % of all naturally occurring diamonds. Type IIa diamonds are said to be the "purest of the pure"of all diamonds, as they are free of the common Nitrogen impurities found in Type I diamonds, that constitute almost 98 % of all naturally occurring diamonds. Being free of impurities and having perfectly formed crystals without any plastic deformations, type IIa diamonds are absolutely colorless.

The origin and history of the diamond is controversial, and like many other historic diamonds it is difficult to separate fact from fiction.

According to one version a poor fisherman was wandering along the sea shore in Istanbul, when he noticed a shining stone among the litter. He casually picked it up and turned it over in his hands not knowing what it was. He put the stone in his pocket and forgot about it, until after a few days later when he was passing the jewelers market he just stepped into the first jewelry shop he encountered. He showed the stone to the jeweler, who didn't seem to be interested. He asked the fisherman to take it away saying that it was a piece of glass, or leave it with him in exchange for three spoons. The fisherman decided to collect the spoons in return for the "worthless"piece of glass. It is from this legend the diamond derived it's name. This jeweler was not aware of the potential value of the stone and sold it to another jeweler for 10 silver coins. According to a slightly different version of the same legend the person who discovered the diamond was not a fisherman but a spoon maker.

In any case the jeweler who purchased the stone for 10 silver coins, consulted another jeweler who was able to identify it immediately as a precious diamond. The second jeweler out of jealousy threatened to disclose the whole matter, and a bitter quarrel ensued between the two men. A third jeweler who heard the whole story, purchased the diamond from the two feuding jewelers, by offering an attractive sum of money to each of the angry jewelers. But, by this time the news of the diamond had reached the Grand Vizier, Ahmed Pasha, who in turn informed the Sultan Mehmed IV, who ordered the stone to be brought to the palace. When the stone arrived at the palace the Sultan took possession of it, and it is not known whether the owner's of the diamond were actually compensated by the Sultan.

This version of events is related by the official historian of the Ottoman Court, Rashid. In fact, records of the museum show that a ring stone called Spoon-maker's diamond belonged to Sultan Mehmed IV, but this stone along with it's gold weighed only 10-12 grams, i.e. 50-60 carats. However, the spoon-maker's diamond displayed in the museum weighed 86 carats, which is bigger and heavier than the stone listed in the records.

The question now arises as to the actual origins of the Spoon-maker's diamond displayed in the glass case at the Topkapi Museum.

A second legend of the diamond, originating from India, may provide a probable explanation for the origin of the 86-carat Spoon-maker's diamond. The fact that the origin of the diamond is traced back to India, grants a measure of acceptability to this version, as India had been the only source country for diamonds prior to the 18th century. A French officer by the name of Piggot is supposed to have purchased the diamond in 1774 from a Maharajah of Chennai (Madras), and brought it to France. The diamond then passed through several owners, until it was put up for auction in Paris. At the auctions Napoleon's mother Letizia Ramolino, also known as Madame Mere, purchased the diamond. Madam Mere wore the diamond, as a pendant to a necklace, and used it in this manner for a quite a long time. When Napoleon Bonaparte was sent sent into exile in 1814 to the Island of Elba, she too joined him, but subsequently when Napoleon planned to return to France, she sold the diamond, in order to finance her son's campaign to return to France.

The diamond was then purchased by one of the agents of Tepelene Ali Pasha, who happened to be in Paris at that time, for 150,000 gold pieces. The agent then returned to Janina (Ioannina), where Ali Pasha was based as Provincial Governor of the Ottoman Empire, and handed over the diamond to him. Ali Pasha was a powerful Governor, who extended his rule within the Ottoman Empire, over much of Albania, Macedonia, Epirus, Thessaly and the Morea. In spite of his allegiance to the Ottoman Sultan, Ali Pasha, began to act like an independent Sovereign, and repeatedly refused to carry out the orders of the Ottoman Sultan, always giving some plausible excuses. He even plotted with the British and the French to establish an independent Janina State. Sultan Mahmud II, the Ottoman Sultan at that time was planning a centralization of his government, in order to consolidate his rule throughout the empire, and decided to eliminate Tepelene Ali Pasha, who had been insubordinate to him, and ordered his assassination. Ali Pasha was killed in 1819 and all his treasures including the Spoon-makers diamond was confiscated ,and transferred to the Ottoman treasury.

It is known that the Piggot's diamond that was purchased by Napoleon's mother and later sold to Tepelene Ali Pasha weighed 86-carats. The Spoon-maker's diamond in the treasury of the Topkapi Museum also weighed 86 carats. The similarity in weights of the two stones is no co-incidence. It provides strong evidence to prove that the Piggot's diamond and the Spoon-maker's diamond, are one and the same stone. The setting of the two rows of 49 brilliants around the diamond were carried out either on the orders of Tepelene Ali Pasha or Sultan Mahmud II.

The stone still remains as the star exhibit in the Topkapi Palace Musem, at Istanbul, in the same mounting surrounded by two rows of 49 brilliants, and had been viewed by millions of foreign tourists visiting Istanbul over the years. The Spoon-maker's diamond became the subject of a very popular and interesting Hollywood film in the 1960s titled "The Topkapi" starring Peter Ustinov and a host of other popular Hollywood Stars, in which the renowned diamond is stolen from it's glass case and replaced by a duplicate, the whole operation being carried out according to clockwork precision by a team of professional robbers, after the museum closed for the day, without activating the electronic burglar alarms.