The Star of America is a Graff diamond, handled by the "King of Diamonds"Laurence Graff, and named by him, to commemorate the launching of Graff U.S.A., a New York based Graff workshop that specializes on the cutting and polishing of large rough diamonds, that may eventually qualify as notable and famous diamonds. The factory is manned by a team of 10 highly experienced cutters, headed by a master cutter. Since it's inception this factory has cut and polished several of the world's notable diamonds, including the 101-carat "Golden Star"diamond. 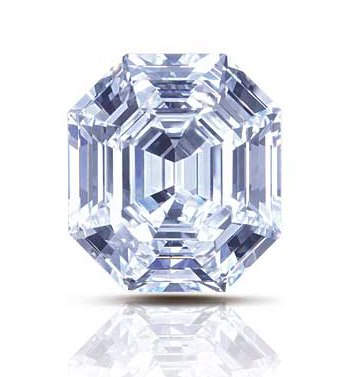 The diamond is a 100.57-carat, D-color, flawless, Asscher-cut stone. It may be the !7th largest D-color diamond, and the second largest Asscher-cut diamond in the world, after the Portuguese diamond which is 127.01 carats in weight.

The Asscher-cut is a diamond shape developed in 1902, by I. J. Asscher &Co. of Holland, renowned diamond cutters of Amsterdam, who had earned the rare distinction of cutting the world's first and second largest rough diamonds, the Cullinan and the Excelsior that weighed 3,106 carats and 995 carats respectively. The Asscher-cut is a stepped square-cut also known as the square emerald-cut, and like the emerald-cut has cropped corners. The pavilion facets are rectangular in the same way as the emerald-cut, and this creates the unique optical appearance of the stone. The classic emerald-cut shape has a length-to-width ratio of between 1.30 and 1.40, but the Asscher-cut being square should ideally have a length-to-width ratio of 1.00, but a slightly higher ratio from 1.01 to 1.05 is permissible. 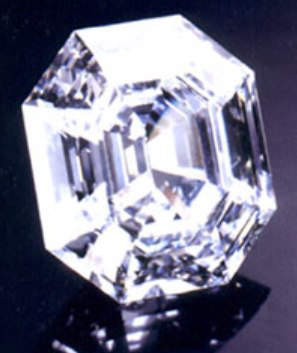 History of the diamond

Besides the fact that the rough stone was discovered in the alluvial deposits near the orange river in South Africa, and had a weight of 225 carats, nothing else is known about the early history of the diamond.

The rough stone was undoubtedly cut by the expert master cutters of Graff in one of the two workshops of Graff that specializes on the cutting of large rough diamonds-the New York factory and the Antwerp factory.

Graff Antwerp workshop situated in the famous Antwerp diamond center, is manned by a well trained and highly experienced team of 30 experts, who handle each stone individually, and after prolonged and meticulous planning, decide on the most appropriate shape, size, and finish, that would bring out the full potential of the stone. 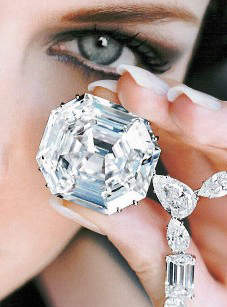 Being a relatively new find the diamond does not have much of a history associated with it, but it is hoped that the diamond would pick up it's own myths and legends as it moves towards the future.

Laurence Graff, the founder of the Graff International Business Empire, has set an unsurpassed standard of excellence and innovation in the industry, and it is said that more important gem quality diamonds have passed through his hands than any other living dealer. Some of the stones are centuries old and steeped in myth and history, while others have just been discovered and brought to life in Graff's own workshops.

List of D-color diamonds greater than 100 carats arranged in descending order of weights.

The remaining 2 % of naturally occurring diamonds are Nitrogen-free or contain un-detectable amounts of Nitrogen (type II diamonds). In the absence of Nitrogen these diamonds are absolutely colorless, and are known as D-color or Top-color diamonds (type IIa diamonds). However a small percentage of these diamonds have undergone plastic deformation producing rare fancy colors such as red, pink, purple, orange, brown.

A small percentage of type II diamonds can have trace amounts of Boron as impurities instead of Nitrogen (type IIb diamonds). Boron imparts a blue color to diamonds. However they constitute only 0.1% of all naturally occurring diamonds.