The Star of Lesotho Diamond

"The Star of Lesotho" was actually the name given to a spectacular white rough diamond weighing 123 carats that was discovered at the Letseng-la-Terae diamond mine at Mokhotiong in Lesotho, in October 2004, after mining operations were resumed at the previously abandoned diamond mine, after a lapse of over 20 years. Being a low grade kimberlite mine, producing only around 2 carats per hundred tons (cpht) of ore and high average cost per carat of over US$ 1,900, which was 20 times the industry average, large mining companies that operated the mine previously, such as Rio Tinto (1967-1972) and De Beers (1977-1982) ceased operations after a short period, as running the mine became uneconomical dut to a slump in world diamond prices. However,with the surge in diamond prices at the turn of the century, the Government of Lesotho invited prospective diamond mining companies to re-start operations at the mine. In response to this invitation, Gem Diamonds Ltd, a South African based diamond mining company, agreed to re-open the mine in 2004, as a joint venture between the company and the Government of Lesotho, known as the Letseng Diamond Company, with Gem Diamonds owning a 70% stake and remaining 30% owned by the Government of Lesotho. Soon after operations restarted at the mine, a significant discovery was made at the mine in October 2004, just days before the official re-opening of the mine, a harbinger of great discoveries that lay in store for the future. This was the discovey of a spectacular white diamond, weighing 123 carats, that was named the "Star of Lesotho," reflecting not only the outstanding quality of the rough diamond, but perhaps also the great potential the mine holds for the future. The rough diamond was eventually transformed into a magnificent 53.11-carat heart-shaped diamond by Diamcad on behalf of Safdico, the manufacturing arm of Graff diamonds, who acquired the stone. Graff diamonds decided to retain the name "Star of Lesotho" originally given to the rough stone, due to the outstanding characteristics of the cut and polished stone, that was later sold by Laurence Graff to an unnamed buyer.

The "Star of Lesotho" diamond is a Type IIa, D-color, VVS2 clarity diamond, with a perfect heart-shaped cut, and having a weight of 53.11 carats. The diamond is Type II because of the absence of detectable quantities of nitrogen. Type II diamonds can be type IIa or type IIb. Type IIa diamonds can be of three sub-types :-

Sub-type 1 - Chemically pure and structurally perfect diamonds. These diamonds are absolutely colorless, in the absence of impurities, such as Nitrogen,Boron and Hydrogen,that can cause color in diamonds and the absence of any plastic deformation that can impart fancy colors to diamonds,such as pink,brown, purple and red. Various epithets are used to refer to these diamonds, such as the "purest of the pure," "diamonds of the purest water," "whiter than white" etc.However, such diamonds constitute only about 1-2% of naturally occurring diamonds and are quite rare. Under the GIA color grading scale for diamonds, these diamonds fall under the range D to F. Most of the diamonds that originated in the ancient diamond mines of Kollur, and presently more than 70% of the diamonds originating from the Letseng diamond mine fall under this category.

Sub-type 2 - Chemically pure diamonds, but have undergone structural modification when forced up from deep inside the earth's crust during volcanic eruptions. Structurlly modified or plastically deformed areas in the diamond absorb visible light in different regions of the spectrum causing their complementary colors, suh as pink, red, purple and brown to appear. However, such fancy colored diamonds are extremely rare and constitute only about 0.1% of all naturally occurring diamonds.

Sub-type 3 - Chemically pure diamonds, but have been subjected to natural radiation like alpha, beta and gamma rays or neutrons over long periods of time, that causes changes in the crystal structure, that imparts a green color to the diamonds. Their occurrence however, is extremely rare, even scarcer than plastically distorted diamonds and less than 0.1% of all naturally occurring diamonds. 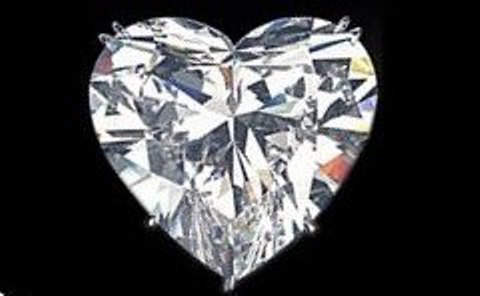 "Letseng La Terai" (the swamp in the corner) in the local Sesotho language, located around 70 km from Mokhotiong, is the World's highest diamond mine, situated at an altitude of 3,100 meters. Kimberlite pipes of this mine were first discovered by United Nations geologists headed by Peter Nixon in 1957. South African adventurers who heard the news of this discovery in 1958, were the first to try their luck at prospecting for diamonds, high up in the mountains. An expedition team led by Colonel Jack Scott and accompanied by a young man named Keith Whitelock were the first to explore the mountain tops of Maluti mountains in northeastern Lesotho, on horseback, sometimes spending up to a week in harsh weather conditions that prevailed at high altitudes. In the end the pioneer explorers were rewarded for their efforts, when they were able to collect up to 1,800 carats of diamonds. The pipe was declared a government digging in 1959, and artisanal alluvial diamond diggers then began prospecting for diamonds from around that time. By the year 1967, it was estimated that around 6,000 local artisanal diggers were on the site, trying their luck at diamond prospecting. During this period the pipes were estimated to have produced up to 63,000 carats of diamonds including the famous Lesotho Brown diamond in 1967, a 601-carat massive rough diamond discovered, by a poor woman named Ernestine Ramaboa. This rough diamond was eventually acquired by Harry Winston at an auction in Geneva in 1968, and transformed into 18 polished diamonds, the largest of which came to be known as Lesotho I, an emerald-cut, flawless, pale-pink diamond, weighing 71.73 carats.

Rio Tinto, a British-Australian multinationl mining company that specializes in the mining and extraction of minerals, coal and diamonds, with operations on six continents, was then awarded the exploratory rights for the pipes in 1968, and was entrusted with the task of carrying out a feasibility study, with a view of opening a full-fledged mine. During this period of study that lasted until 1972, 23 boreholes were drilled, bringing out 2,100 meters of core material, and 3.0m by 2.7m drives were driven to a depth of 60 meters below the surface, bringing out more core materia from the main pipe, in addition to material brought out by surface trenches. Altogether, over 80,000 tons of kimberlite were treated and it was found that overall the kimberlite was of low grade, producing only around 3.5 carats per hundred tons, even though many large high-quality diamonds were also recovered. Rio Tinto abandoned the deposit in August 1972.

Four years afterwards, the Government of Lesotho opened negotiations with the diamond mining giant, De Beers to re-evaluate the main and satellite kimberlite pipes, using data collected by Rio Tinto. These negotiations led to the signing of an agreement in 1976, that envisaged the development of an open-pit mine 120 meters deep, to exploit the Main-pipe, and the employment of underground drives to sample and evaluate the Satellite-pipe. It was anticipated that the mine would have a life span of 8 years. The mine officially opened in November 1977 and within a period of 5 years, the Main-pipe had been worked down to a depth of 120 meters, and the Satellite-pipe to a depth of only 15 meters. 9.4 million tons of kimberlite had been treated and had produced 272,840 carats of diamonds. De Beers ceased operations in 1982, perhaps due to low-grade of the ore, the high cost of production and the slump in world diamond prices, that made its continued operation economically unviable.

Establishment of the Letseng Diamonds (Pty) Ltd. in 1995

The Government of Lesotho did not give up hope, and continued to pursue ways and means of re-opening the Letseng diamond mines in the 1990s, with the surge in diamond prices towards the end of the century. As a result of these efforts a joint government cum private investor company, known as the Letseng Diamonds (Pty) Ltd., a Lesotho-registered company, was established in 1995, with the Lesotho Government owning a 24% stake and the rest by private investors. Letseng Investment Holdings (Pty) Ltd. based in South Africa was the main investor in the joint company. Letseng Diamonds (Pty) Ltd. acquired the mining rights for Letseng mine in 1999. However, work on the mine actually started in 2003, beginning with the reconstruction of the mine's infrastructure. In November 2003, mining activities began at the two alluvial diamond deposits, the Qaqa River deposit associated with the Satellite-pipe and the Patiseng River deposit associated with the Main-pipe. In March, 2004, mining resumed at the Satellite-pipe which was abandoned in 1982.

The Letseng Diamond Mine was officially opened by Lesotho's King, His Majesty Letsie III, in November, 2004, and it was just days before the official opening ceremony of the mine, that in October 2004, a spectacular white diamond, weighing 123 carats was unearthed. This extraordinary diamond proved to be a good omen before the official opening ceremony, and a harbinger of great things to come in the future. The spectacular white diamond was christened the "Star of Lesotho" reflecting the outstanding characteristics of the diamond. 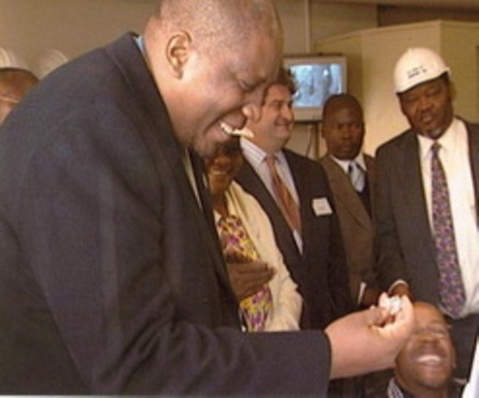 His Majesty Letsie III, King of Lesotho holding the Star of Lesotho rough diamond during the official opening ceremony of the Letseng Diamond Mine in November 2004

Sale of the Star of Lesotho diamond

The 123-carat "Star of Lesotho" rough diamond was sold by tender in November 2004 at Antwerp in Belgium, and was purchased by Safdico, the manufacturing arm of Graff Diamonds.

Cutting and Polishing of the rough diamond

The "Star of Lesotho" rough dimond was studied by engineers, gemologists, master-cutters and polishers of Diamcad, the high-tech diamond cutting and polishing company, based in Antwerp. By employing the latest scanning techniques, state-of-the-art equipment and computer algorithms, the team of experts of Diamcad decided to transform the rough stone into a single heart-shaped diamond, eliminating any inclusions and imperfections in the rough stone. The stone was eventually transformed into a superb heart-shaped, D-color, VVS2 diamond weighing 53.11 carats, mounted on a ring and sold by Graff Jewellers to an unidentified buyer. 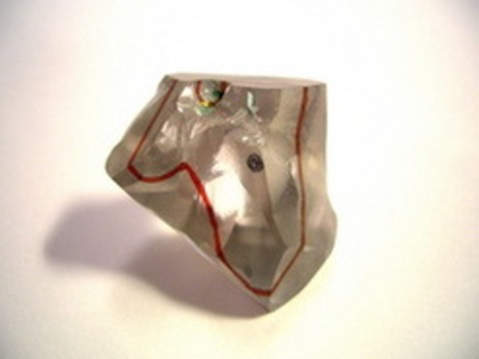 The large diamonds, over 10 carats in weight, belong to the top class of diamonds known as Type IIa. These diamonds are nitrogen free, and free of all factors that can cause color in diamonds, such as boron and hydrogen that impart a blue color to diamonds; plastic deformations that impart rare fancy colors to diamonds, like pink, red, purple and brown; and exposure to natural radiation that imparts a green color to diamonds. These diamonds are said to be chemically pure and structurally perfect, and are known as the "purest of the pure" of all diamonds. They are absolutely colorless and are sometimes referred to as diamonds of the purest water.Under the GIA color grading they fall under D-color, the highest color grading for white diamonds. It is the abundance of these large, high-quality, Type IIa diamonds that enhances the carat value of the diamonds, and makes the mining of the low-grade kimberlite pipes economically viable. The average value per carat of diamonds produced at Letseng is approximately US$ 1,600, which is almost 16 times the industry average.