The "Star of Sierra Leone"is the largest diamond to be discovered in the alluvial deposits of Sierra Leone. The diamond is a colorless, lustrous and pellucid crystal, features that are so characteristic of the exceptional quality colorless diamonds found in the country. The name Star of Sierra Leone appears to have been inspired by the lustrous nature of this enormous crystal.

The rough diamond was an enormous colorless and transparent crystal weighing 969.8 carats, which was subsequently cut into 17 stones, 13 of which were flawless. 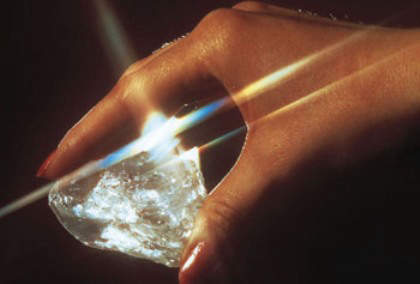 The largest stone that was cut from the diamond weighed 143.20 carats originally, but was flawed. To eliminate the flaws the stone had to be re-cut again, with a drastic reduction in weight, resulting finally in a pear-shaped, colorless, and flawless, 53.96 carat diamond.

Diamonds of Sierra Leone have an international reputation as one of the highest gem quality diamonds in the world. The diamonds are so pure and free of inclusions, that some of them are known as "glasses", clear, transparent and absolutely colorless. Even though the diamonds derived from the "Star of Sierra Leone"have not been graded for color and clarity, in all probability they are D-color diamonds and perhaps internally flawless. 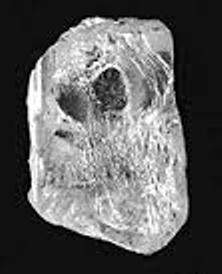 Being D-color diamonds, the Star of Sierra Leone diamonds are Type IIa diamonds, that are characterized as chemically pure and structurally perfect. They are chemically pure due the absence of impurities such as nitrogen, boron, hydrogen etc. which can cause color in diamonds. They are structurally perfect due to absence of plastic distortions in the crystal, which can also impart rare fancy colors to the diamond. Thus in the absence of factors that can impart color to diamonds, these diamonds are absolutely colorless.

The rough diamond was purchased by the world renowned diamond dealers and jewelers Harry Winston Inc. of New York, in the same year it was discovered. The cutting of the diamond was entrusted to Lazare Kaplan the master cutter and cleaver who had descended from three generations of jewelers and had previously earned the distinction of cutting famous diamonds like the Jonker diamond in 1936. Mr. Kaplan learn the craft of diamond cutting in Antwerp, Belgium, and pioneered the establishment of a diamond cutting industry in Puerto Rico. He is always renowned for going in for quality of a diamond, sometimes at the expense of quantity, bringing out the maximum fire and brilliance in a stone.

Mr. Kaplan undertook a detailed study of the rough stone which lasted more than one year. The diamond was finally cleaved in front of a nationwide TV audience in America, and thus the "Star of Sierra Leone"became almost a household name in America. The Government of Sierra Leone issued a special commemoration stamp marking the event, and a special feature of this stamp was its diamond-like shape with a crown, table and pavilion, with the following print appearing on it -"SIERRA LEONE - "The Star of Sierra Leone"- Harry Winston."

The diamond was cleaved into 17 pieces, which were transformed into 17 diamonds, out of which, 13 diamonds were flawless "top color"diamonds. The largest piece which was a "top color"diamond of 143.20 carats was however flawed, and was again re-cut to a flawless pear-shaped diamond of 53.96 carats. Six of the "Star of Sierra Leone"diamonds were later set by Harry Winston in the famous "Star of Sierra Leone"brooch.

Sierra Leone is an independent republic in the West African region, bordered by Guinea on the north and east and Liberia on the South. The country was a British Colony since 1787, and became an independent republic in 1961. The capital city of Sierra Leone is Freetown, which derives its name from the freed slaves who were re-settled there after the abolition of slavery by the British in 1787. The country is rich in mineral resources such as diamond, gold , platinum, bauxite, chromite, iron ore, rutile, and monazite. The mainstay of the economy is agriculture followed by mining, the most important industry in terms of employment and exports. Diamonds mined in the alluvial deposits of the country are one of its main exports.

Alluvial diamonds were first discovered in Sierra Leone in January 1930, by two Geologists of the Sierra Leone Geological Survey N. R. Junner and J. D. Pollet. A company by the name of Sierra Leone Selection Trust (SLST) acquired a diamond prospecting lease for the whole country, and commenced alluvial diamond mining in the Kono area in 1934, and annual production reached one million carats by 1937. In 1954 the company started mining in the Tongo area. In 1970, the Government of Sierra Leone established the Diamond Mining Company known as Diminco, which acquired a 51 % interest in the assets of the SLST. Peak annual output from the two fields in the Kono and Tongo areas exceeded one million carats in the 1960s and 1970s, but declined steadily to less than 100,000 carats by mid-1980s. Large scale illicit mining and smuggling of diamonds began after the country gained independence in 1961.

Kimberlite diamond pipes were first discovered in Sierra Leone in 1948 in the Koidu (Kono) area and later in the Tongo area. Studies conducted by diamond mining companies like the Koidu Holdings Ltd. and the Rex Diamond Mining Corporation have revealed the existence of substantial quantities of diamonds up to a depth of about 300 meters. Koidu Holdings Ltd. started trial mining and bulk sampling programs at the Kimberlite pipe in Koidu, producing an initial output of 18,000 carats, and the company has been given a license to exploit the other Kimberlite pipe at Tongo.

Sierra Leone was engulfed in a civil war between the Government and the Revolutionary United Front (RUF) rebels, between 1991 and 2002, that resulted in hundreds of thousands of deaths and the displacement of over two million people, who fled to the neighboring countries as refugees. The civil war destroyed much of the economy and infrastructure of the country. The rebel forces that controlled the diamond producing areas of the country, were diverting the diamonds produced to the international markets, through Charles Taylor's Liberia, and used the funds acquired to purchase weapons, to sustain the civil war against the government. The situation became so critical that the United Nations had to step in and impose a ban on the sale of diamonds originating from Sierra Leone and Liberia, which were referred to as "blood diamonds."

After the official ending of the civil war in Sierra Leone in January 2002, and the disarming of the RUF rebels and the Civil Defense Forces, elections were held in May 2002, and the legitimate government of Sierra Leone had been able to re-establish its authority. In June 2003, the United nations lifted the ban on the sale of Sierra Leone diamonds, and the government of President Tijjan Kabbah, embraced the Kimberley Process, leading to increased investment in the diamond mining sector. Since the introduction of the Kimberley process, the export of legally mined diamonds increased rapidly from $ 10 million in year 2000, to $ 76 million in 2003, $ 127 million in 2004, and $ 140 million in 2005.

It appears that since the discovery of diamonds in Sierra Leone in January 1930, for the first time the benefits accruing from this valuable natural resource are beginning to reach the impoverished masses of this poor African nation.