The Star of the East Diamond was part of the collection of jewels belonging to the Ottoman Sultan, Abdul Hamid II , who ruled between 1876 and 1909. The exact circumstances under which the diamond came into the possession of the Sultan are not known. Even the origin of the name and at what point in it's history it was christened, remains a mystery.

The diamond is a 94.80-carat, pear-shaped, D-color stone, of unknown clarity grade. 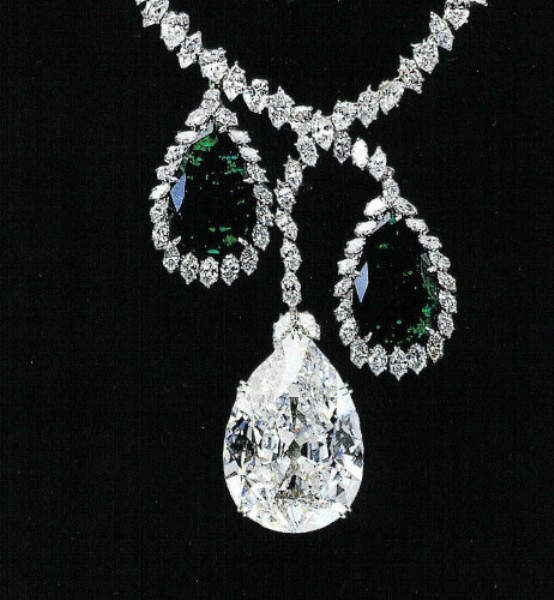 The early history of the diamond such as the country of origin, mine of origin, the year of discovery, etc are not known, but what we know for certain is that the diamond was part of the collection of jewelry belonging to Sultan Abdul Hamid II of Turkey (1876-1909). This was the period around which diamonds were being discovered in South Africa, and the new diamond mines such as the Kimberley, De Beers, Premier etc. had just been established and gone into production. All significant finds around this time originating either in the deep mines or the alluvial deposits were being extensively reported, and a diamond such as the "Star of the East"weighing 94.80 carats in the finished state, and probably as twice as big in the rough state, could not have gone unnoticed. As such it is highly improbable that the "Star of the East"could have originated in the diamond mines of South Africa. Judging by the size, color, and clarity of the stone, it appears to have had it's origin in any one of the five groups of mines that were situated on the eastern side of the Deccan Plateau in southern and central India.

Sultan Abdul Hamid II ascended the throne on August 31, 1876, at a time when the Ottomans had earned the indignation of the Western Powers and Russia, for the suppression of the Bulgarian uprising. Abdul Hamid II adopted a policy of pan-Islamism in opposition to Western intervention in Ottoman affairs. He dismissed parliament in 1877, and suspended the constitution, and ruled as an absolute dictator for 33 years, from the seclusion of the Yildiz Palace in Istanbul, assisted by his secret police and severe press censorship. During his rule he introduced educational reforms, and established 18 professional schools, and a network of primary, secondary, and military schools. He also developed the Railway and Telegraphic systems in the country.

However Abdul Hamid II was deposed in 1909, following the military uprising of the "Young Turks", who were dissatisfied with his despotic rule and also resented European intervention in the Balkans. Abdul Hamid's brother Mehmed V was installed as the new Sultan. Just before the deposition of Sultan Abdul Hamid II some of his jewels appeared in Paris for sale, and the Star of the East was one of these jewels. Cartier's of Paris put up the diamond for sale in 1908.

It was around this time that Evalyn Walsh daughter of the multimillionaire miner and gold prospector Thomas Walsh got married to Edward Beale Mclean, heir to the Washington Post and Cincinnati Enquirer publishing fortune. In fact Evalyn eloped with her childhood friend Edward, against the wishes of her family, but later the two families reconciled and agreed to their marriage. The newly wedded couple sailed off on a three-month honeymoon to Europe and the Middle East, with $ 200,000 in "pin"money as a wedding gift from both families. At the end of the trip, Evalyn and Ned arrived in Paris without even enough money to pay the hotel bills, Evalyn cabled her father and got down more money for her expenses . The couple then visited Cartier's of Paris, and Pierre Cartier, who was a family friend, thought that this would be an ideal opportunity to dispose of the 94.80- carat "star of the East"diamond. He showed the diamond to Evalyn, which was mounted on a chain below a hexagonal emerald of 34 carats and a pearl of 32 grains. Evalyn was so impressed by the diamond that she decided to purchase it, in spite of objections from her husband. The purchase price of the diamond was $ 200,000, but no money was paid immediately. Being family friends Evalyn told her husband that her father would settle Pierre Cartier subsequently. Later when the couple arrived in the United States, Evalyn had no money to pay the customs duty on the diamond and she smuggled the stone without paying duty.

It was three years later in 1911, when Evalyn and her Husband visited Paris again, that she purchased the infamous diamond, "the Hope"diamond for $ 180.000. The main reason why she decided to purchase "the Hope", was because of it's notorious past. She thought that things that were unlucky for everybody else would be lucky for her, because she thought she was an exception. "The Hope"diamond became her favorite ornament , and she wore it for all occasions, such as her appearances in the latest Paris fashions, and also the lavish parties she threw at her Washington residence, for politicians, business tycoons, celebrities, and dignitaries from around the world. Evalyn writes in her autobiography, "My own preference generally is for show. It's only when the thing I buy creates a show for those around me that I get my money's worth."

But the curse of "the Hope"diamond seems to catch up with her later in life. She runs short of money and had to pawn her jewelry on several occasions. Her adored first born son, Vinson is killed in an automobile accident at he age of nine. Her husband Ned runs off with another woman and dissipates their fortune. A chronic alcoholic he eventually dies in a Sanatorium. Their family newspaper the Washington Post goes bankrupt and Evalyn is forced to sell some of her properties. Then in 1946 Evalyn's daughter dies of an overdose of sleeping pills, at the age of 25. All these misfortunes were attributed to the curse of "the Hope"diamond, but Evalyn herself was more down to earth in her views on the diamond's curse. "What tragedies have befallen me might have occurred had I never seen or touched "the Hope"Diamond. My observations have persuaded me that tragedies, for anyone who lives are not escapable."Evalyn Walsh died in 1947, and her collection of jewels including "the hope"diamond and the "Star of the East"was sold in 1949 to pay the debts of her estate.

"The Hope"diamond was then sent on a goodwill tour for 10 years, around the United States and worldwide, and was shown at many exhibitions and charitable events, including their own court of Jewels exhibition. Later in 1958, Harry Winston donated the Hope diamond to the Smithsonian Institution, with the primary aim of helping the institution to build up a major national gems collection for the American people. The Hope diamond is exhibited today in the National History Museum of the Institution, in the hall of Geology, Gems and Minerals, in the Harry Winston Room, revolving slowly on it's pedestal behind 3"of bullet proof glass.

As for the "Star of the East"diamond, Harry Winston sold it to King Farouk of Egypt in 1951,just one year before his overthrow by the free officers led by Mohammed Neguib, who subsequently became the President of the newly formed United Arab Republic. Unfortunately for Harry Winston, he had not received payment from the King, for the diamond purchased, and had to wait for 3 years for the inquiry and ruling of the government appointed legal board entrusted with the disposal of the former royal assets. the board ruled in his favor, but the diamond was in a safe-deposit box in a Bank in Switzerland. This required several years of litigation, until finally the Bank released the diamond to it's rightful owner, Mr. Harry Winston.

Last transaction and present owner of the diamond

In 1969, Harry Winston sold the "Star of the East"to an Anonymous buyer, who requested that the diamond be remount as a pendant, to a diamond necklace with provision for attachment of two matching pear-shaped diamonds on either side, as shown in the photograph,

D-color diamonds also known as top-color diamonds are the "purest of the pure"of all naturally occurring diamonds, with perfectly formed crystals, and complete absence of impurities such as Nitrogen and boron. Color in diamonds are formed in three possible ways :-

(2) Plastic deformation of the crystal during it's formation and subsequent rise to the surface of the earth. Such deformed areas can absorb light in different regions of the spectrum giving rise to a variety of colors such as pink, red, purple, orange, brown etc.

(3) exposure to natural irradiation for prolonged periods of time of several million years in duration causing the crystals to absorb magenta wave lengths giving rise to a green color.

D-color diamonds have not been subjected to any one of the above conditions and therefore they are absolutely pure and colorless. Only about 1-2 % of all naturally occurring diamonds may fall under this category.