Star of the Season Diamond

The name Star of the Season appears to have been given by the present owner of the diamond Sheik Ahmed Hassan Fitaihi, the renowned Saudi jeweler, and collector and connoisseur of diamonds, who purchased the stone in 1995 for a record sum of $ 16,500,000, the highest amount paid for a diamond at any auction in the world. The Sheik had named two other diamonds in his collection as The Star of the Desert, and The Star of Happiness, and another diamond as The Red Sea Star. 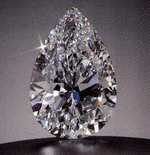 Early history of the diamond

The early history of the diamond such as the country of origin, mine of origin, date of discovery, weight of the rough stone, original owner of the diamond, etc. are not known, but the stone appears to be of South African origin and was cut by the internationally renowned diamond cutters The Steinmetz Group, which has its main diamond cutting facility in South Africa. The stone made its first appearance in May 1995 at a Sotheby's auction in Geneva. The size of the diamond, its color, exceptional clarity, and the pear-shaped cut , all contributed in making this diamond a very rare and unusual stone, and the buyers who inspected the stone before the auctions were convinced of its uniqueness, and predicted a competitive bidding for its acquisition.

The auction hall was packed to capacity with many famous international bidders that included the Saudi jeweler, diamond collector, and connoisseur Sheik Ahmed Hassan Fitaihi. By the time auction started the atmosphere in the hall was fully charged and tense. The bidding was intense and competitive and Sheik Fitaihi was determined to acquire the diamond at any cost. The price of the diamond escalated rapidly, after the bidders tried to outbid one another, and finally the auctioneer knocked down the diamond in favor of Sheik Ahmed Hassan Fitaihi for a record sum of US $ 16,500,000. This turned out to be the highest amount paid for a diamond at any auction in the world. The 100.10-carat Star of the Season goes down in history as the most expensive diamond ever sold at an auction.

Immediately after the acquisition of the diamond by Sheik Fitaihi, an offer was made for the diamond at a price substantially higher than the purchase price, but being a collector and connoisseur of diamonds the Sheik turned down the offer.

Sheik Ahmed Hassan Fitaihi is presently the Chairman and the C.E.O. of the Fitaihi Company based in Jeddah, Saudi Arabia. The Sheik has become a force to be reckoned with at international jewelry auctions. The Sheik, together with Robert Mouawad of Mouawad Jewelers and Laurence Graff of Graff Diamonds, have been responsible for some of the astonishing and record diamond prices achieved in recent years.

History of the Fitaihi Company

Sheik Fitaihi is the heir to a successful business enterprise dealing in jewelry and established 100 years ago in 1907, in Mecca, Saudi Arabia. His grandfather opened a jewelry shop in Mecca in 1907. This was at a time when the Hejaz region of Saudi Arabia along the Red Sea, which included the Holy City of Mecca, was still under the rule of Sharif Hussain Ibn Ali, the king of Hejaz, who also declared himself Caliph in 1924. Two of Sharif Hussain's sons also became kings. Abdallah his second son became King of Transjordan in 1921 and Faisal his eldest son became the King of Iraq. Sharif Hussain Ibn Ali claims his descent from the Hashemite clan of the Quraish tribe, the same clan to which the Holy Prophet Muhammad, the founder of the religion of Islam belonged.

The Sauds ruled much of Arabia in the 18th and 19th centuries but were later driven out of Arabia by the Rashids in 1880 and lived in exile in Kuwait. Ibn Saud the founder of the Kingdom of Saudi Arabia, was then still an infant. In 1901, when Ibn Saud was 21, he led a small force of 40 camel men, and re-captured their old family capital of Riyadh, killing the Rashidi Governor of Riyadh in the process. Within 2 years the young Ibn Saud was able to re-conquer half of central Arabia. His rival Ibn Rashid sought and obtained Turkish help, and initially defeated the forces of Ibn Saud, in 1904, but was not able to drive him out of central Arabia. During world war 1, Ibn Saud signed a treaty with the British , agreeing to continue the fight against Ibn Rashid, who was being supported by the Turks, and accepting in return protectorate status of Britain. During the period 1920-22, Ibn Saud's forces moved against that of Ibn Rashid, and defeated him and annexed his territory. Ibn Saud was now in control of a greater part of the Arabian Peninsular, except the Hejaz region along the Red Sea coast. In 1924, Ibn Saud's forces captured Mecca and the whole of Hejaz was added to his dominions. In 1932 he formally unified his domains into the Kingdom of Saudi Arabia, and he became the absolute monarch of the kingdom.

In 1933 he signed an agreement with an American oil company to prospect for oil in the kingdom, but it was only in March 1938, the company first struck oil in the kingdom. However with the outbreak of world war II, work on the oil fields virtually ceased. Exploitation of oil resumed again after the war. In 1950 Ibn Saud received only about $ 200,000 per annum as oil revenue, but in 3 years his income rose to $ 2,500,000 a week. The sky rocketing oil revenues set the stage for the economic and social development of the country and today the Kingdom of Saudi Arabia , ranks as the world's leading producer of oil.

After the formation of the Kingdom of Saudi Arabia in 1932, Sheik Fitaihi's father moved his family and his business to the coastal city of Jeddah, the main port city of Saudi Arabia, and a commercial center over the centuries. Ahmed Hassan Fitaihi received his training as a businessman in his father's shop in Jeddah, and eventually succeeded his father in managing the family business. Over the years he has built up a successful business empire, that is a leader in the jewelry trade in Saudi Arabia.

Sheik Ahmed Hassan Fitaihi later attended international jewelry auctions, and had successfully bid and acquired several famous and notable diamonds. His first acquisition was the 80.02-carat, emerald-cut, D-color internally flawless diamond of South African origin, which he purchased in New York in 1991 for $ 7,150,000. The diamond was named the 'Jeddah bride"in honor of his beloved city. Other famous diamonds that were purchased by him include the following:-

The Star of happiness is the largest diamond purchased by Sheik Fitaihi. It is a radiant-cut internally flawless, D-color stone weighing 100.36 carats, and having dimensions of 28.50 x 25.96 x 16.35 mm. He purchased this diamond for $11,800,000. at Geneva in November 1993. Most of the stones in Fitaihi's collection, are colorless diamonds of D-color grade.

Sheik Ahmed Hassan Fitahi has also contributed generously towards projects that would benefit his community. He opened the Fitaihi centre in Jeddah in April 1984, and another center in Riyadh in 1993. He also initiated and supported a project ,which set up the International Medical Center (IMC) in Jeddah in the early 1990s, to fulfill his vision of setting up a state-of-the-art hospital to serve the community, in collaboration with the Cleveland Clinic Foundation.

Last transaction and present owner of the diamond

Since he purchased the diamond in May 1995 for $ 16.5 million, the Star of the Season remains the most prominent item in the magnificent collection of diamonds belonging to Sheik Ahmed Hassan Fitaihi, and being a keen collector and connoisseur of diamonds may remain so for the foreseeable future.

Diamonds are divided into two types depending on whether Nitrogen is present or absent in the crystal structure.

Type 11 :-Do not contain detectable quantities of Nitrogen.

Type 1a :- Nitrogen atoms occur as groups or aggregates. 98% of all natural diamonds are type 1a.

Type 1b :- nitrogen atoms are scattered as single atoms. Less than 0.1 % of natural diamonds are type 1b.

Type 1a diamonds are further sub-divided into three.

Type 1aA- Nitrogen atoms occur as groups of 2-atoms (A- aggregates), which do not absorb visible light and do not affect the color of the diamonds. A-aggregates can quench fluorescence and therefore these diamonds are colorless and non- fluorescent.

Type 1aB- Nitrogen atoms occur as groups of 4-atoms (B-aggregates), which do not absorb visible light and do not affect the color of diamonds. However B-aggregates do not quench fluorescence and therefore these diamonds are colorless and strongly fluorescent.

Type 11 diamonds that are Nitrogen-free are divided into two,

Type 11a:- These diamonds are absolutely pure consisting of Carbon atoms only and are absolutely colorless. They are known as D-color or top color diamonds. However E &F grades may also be included in this category. They are about 1-2 % of of all natural diamonds. However, a small percentage of colorless diamonds might be plastically deformed producing a variety of rare fancy colors such as red, pink, purple, orange, and brown.

Type 11b:- These diamonds are Nitrogen-free, but instead contain trace amounts of Boron, whose atoms are comparable in size to Carbon atoms, like Nitrogen atoms, and therefore can be easily accommodated in the diamond crystal. Boron atoms absorb visible light in the red, orange and yellow regions and therefore the diamonds appear to be blue. All naturally occurring blue diamonds are type 11b. However their occurrence is only 0.1 % of all natural diamonds and therefore extremely rare.