The fancy yellow diamond jewel/brooch designed in the late 19th-century gets its name from His Late Imperial Majesty Sultan Ahmed Shah Qajar, the Shah of Persia, from 1909 to 1925 and the last ruling member of the Qajar dynasty. Sultan Ahmed Shah Qajar most probably inherited the jewel from his great-grand father Nasser al-Din Shah Qajar (1848-1896), through his grand-father Mozaffar al-Din Shah Qajar (1896-1907) and his father Mohammed Ali Shah Qajar (1907-1909). Nasser al-Din Shah Qajar was a great connoisseur and collector of diamonds and diamond jewelry. He has gone down in history as the first reigning monarch who appreciated the beauty of yellow diamonds, the previously under-rated Cape-series of diamonds and gave a boost to its image by purchasing a collection of 23 yellow diamonds on his third trip to Europe in 1889. 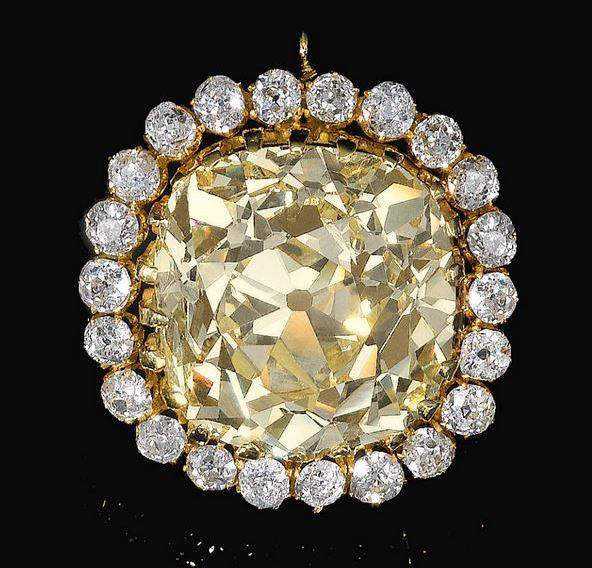 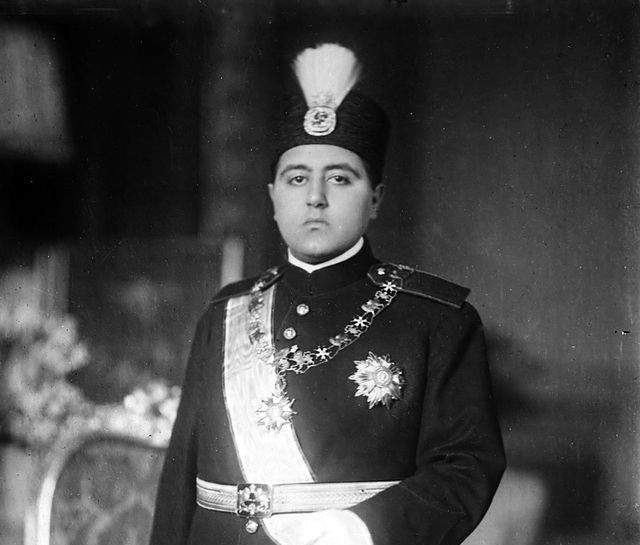 Characteristics of the Yellow Diamond

When the historic diamond reappeared at a Sotheby's Magnificent Jewels and Noble Jewels Sale held in Geneva on May 14, 2013, it was accompanied by a GIA report that gave the 4Cs of the diamond. According to this report, the diamond is a natural fancy yellow color, cushion-cut, SI-1 clarity stone, weighing 74.53 carats.

The cut of the stone appears to be old-European cut that became popular in the late 19th and early 20th centuries. The fact that the diamond was cut in Europe in the late 19th-century and was purchased by Nasser al-Din Shah during one of his trips to Europe around this period confirms that the cut is most probably old-European.

The Brooch setting of the Diamond

The diamond is mounted in yellow gold as the centerpiece of a brooch, surrounded and highlighted by a row of smaller cushion-shaped white/colorless diamonds, consisting of 22 stones. The setting could be worn as a brooch pinned to a uniform/jacket or as a hat ornament. 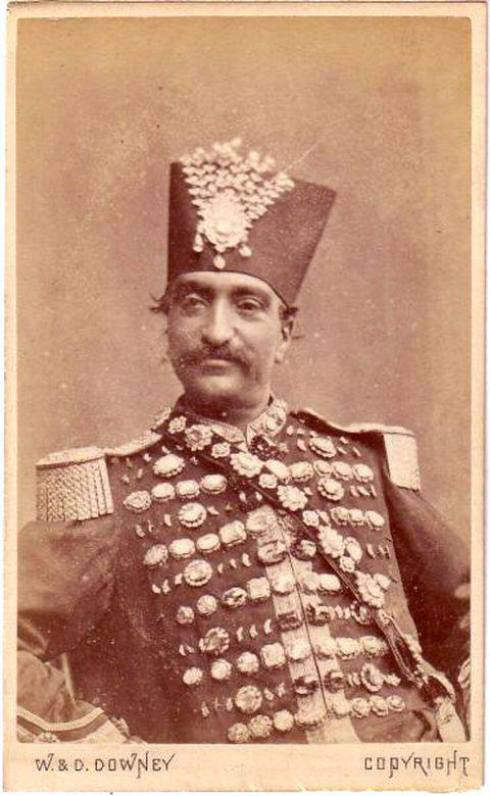 Nasser al-Din Shah wearing a multitude of diamond brooches on his uniform. Could the Sultan Ahmed Shah Qajar fancy yellow diamond brooch be among them?

History of the Diamond

Country-of-origin and mine-of-origin of the Diamond

Nasser al-Din Shah made three trips to Europe during his reign, in 1873, 1878 and 1889. This was the period when large quantities of Cape Series diamonds were reaching Europe after the discovery of the first diamonds in the Kimberley region of South Africa in 1869 on the slopes of Colesberg kopje, on the farm "Vooruitzigt" belonging to Nicolas de Beer and Diederick de Beer. Most of the Cape Series diamonds originated in the first two deep diamond mines dug on this farm , known as the Kimberley and the De Beers diamond mines, which were at one time the world's most productive mines. The Cape Series diamonds were mainly of different shades of yellow  and sometimes brown considered to be of poor quality, and fetched lower prices in the international diamond market. During his three visits to Europe Nasser al-Din Shah purchased at least 48 cut and polished yellow diamonds, 23 of which he purchased on his third trip in 1889. The largest of these diamonds was a rectangular brilliant of 152.16 carats. The 74.53-carat, old-European cushion-cut Sultan Ahmed Shah Qajar fancy yellow diamond was most probably among the 48 yellow diamonds he purchased in Europe. The purchase of the yellow diamonds by the reigning monarch of Iran, gave a big boost to the image and prices of yellow diamonds, leading to their acceptance in the international diamond markets. 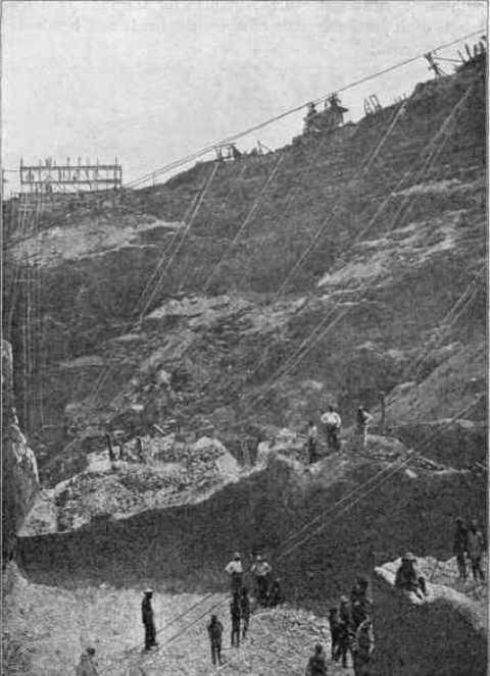 Section of interior of Kimberley Diamond Mine in 1874 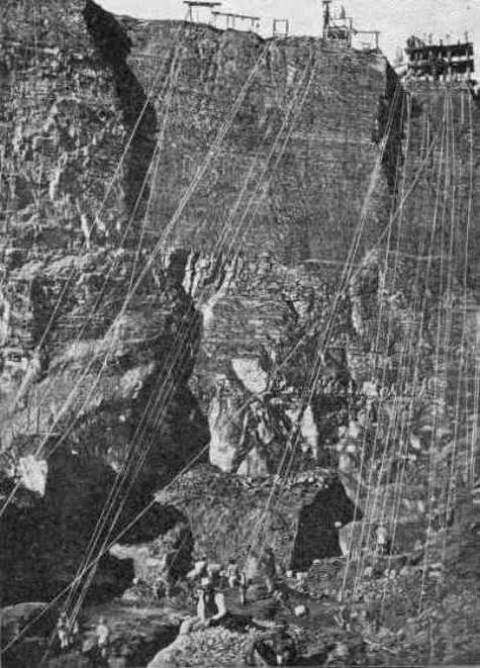 Section of interior of De Beers Diamond Mine in 1874

Possible country where the diamond was cut and polished ?

In the late 19th-century, from the 1860s to the 1890s, the City of Amsterdam in Netherlands, was the main diamond cutting center in Europe, a pre-eminent position enjoyed by this city since the 17th-century, when the Dutch East India Company was in control of the diamond producing areas of the Indonesian archipelago. Large quantities of rough diamonds discovered from the newly opened mines in South Africa in the late 19th-century, reached Amsterdam, where they were cut and processed by the thousands of highly skilled Jewish diamantaires settled in the city, before they were dispatched to the international diamond markets around the world. Hence, in all probability the 48 yellow diamonds purchased by Nasser al-Din Shah in the late 19th-century, including the Sultan Ahmed Shah Qajar fancy yellow diamond was actually cut and polished in Amsterdam, the main diamond cutting center in Europe during this period.

The setting of the diamond in a brooch

The setting of the diamond in a jewel was done by the court jewellers serving the Royal Palace of the Shah of Iran. The jewel was designed to be worn both as a brooch and hat ornament. The metal used for the ornament was yellow gold, that accentuates the color of the yellow diamond.

Later History of the Diamond

Nasser al-Din Shah exercised absolute sovereign power for nearly five decades, from 1848 to 1896, the third longest in the history of Iran. He is considered by historians as the father of modern Iran, introducing development on the western model to Iran, such as modern roads, railways, telegraph and postal services, newspapers, western-style schools etc. Following Nasser al-Din Shah's assassination in 1896, his son Mozaffar al-Din Sha ascended the throne as the Sha of Iran. During his short period of rule of 11 years, from 1896-1907, Mozaffar al-Din Sha is credited with bringing about sweeping changes that had never before been attempted in the ancient history of Iran that dates back to 3000 B.C. This was the granting of a constitution and parliament to the people of Iran, that curtailed the power of the monarchy. 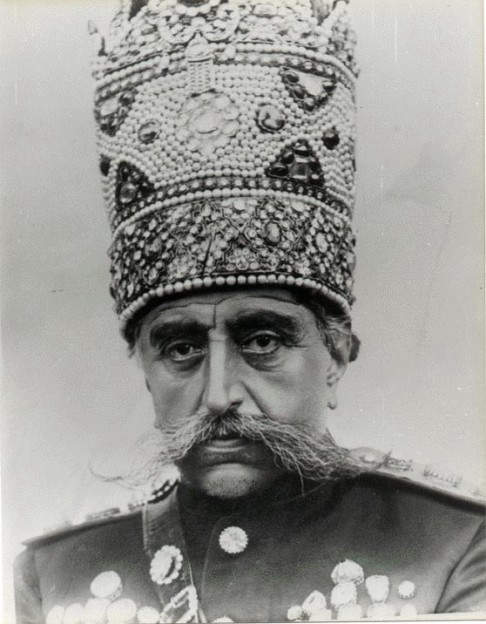 Mozaffar al-Din Sha, who died of a heart attack on January 3, 1907 was succeeded by his son Mohammed Ali Shah, whose rule was short lived and lasted only 2 1/2 years. Mohammed Ali Shah lacked the wisdom and farsightedness of his father, and tried to reverse the constitutional reforms introduced by his father, with disastrous results. He abolished the constitution and dissolved parliament, with a view of restoring the absolute monarchy, which was vehemently opposed by the reformists, that led to his overthrow and taking refuge in the Russian Legation in Teheran in July 1909, and subsequent exile in Russia. Reformist forces restored the constitution, and Parliament on July 16, 1909 voted to place Mohammed Ali Shah's 11-year old son, Ahamed Shah on the throne. 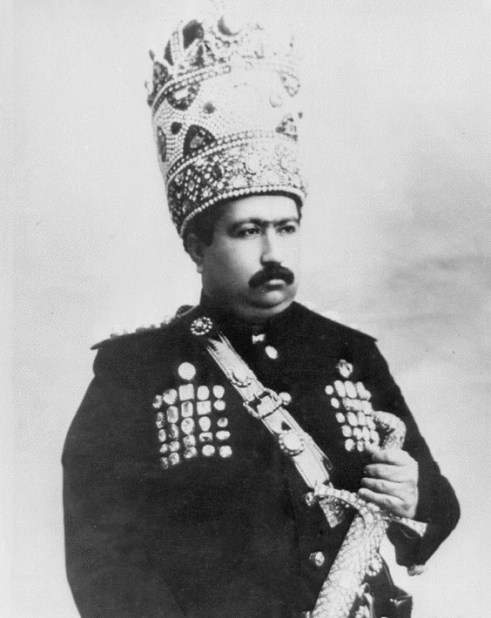 Ahmed Shah Qajar the last ruler of the Qajar dynasty

Young Sultan Ahmed Qajar at the age of 9 years

Sultan Ahmed Shah tried his very best to fulfil his crucial role as a constitutional monarch putting together the best team of ministers to run the country. Unfortunately this was a period of turmoil in Iran with the Russians and British carving out their own spheres of influence in the country. Foreign intervention in the internal affairs of the country made effective governing virtually impossible and Sultan Ahmed Shah became the victim of circumstances beyond his control. With the outbreak of World War I Russian and British troops fought against the forces of the Ottoman Empire in Iranian soil, much against the wishes of the Iranian people, raising an outcry across the country against Sultan Ahmed Shah and his government, for their failure in preventing the country being used as a battleground. Again in 1917, Britain used Iran as a springboard to mount an attack on Russia in an unsuccessful attempt to reverse the October Revolution of 1917, which attracted a decisive response from the newly born Soviet Union, that annexed portions of northern Iran and extracting humiliating concessions from the Qajar government after marching into Teheran. This led to further alienation of Sultan Ahmed Shah Qajar and his government from the people of Iran. 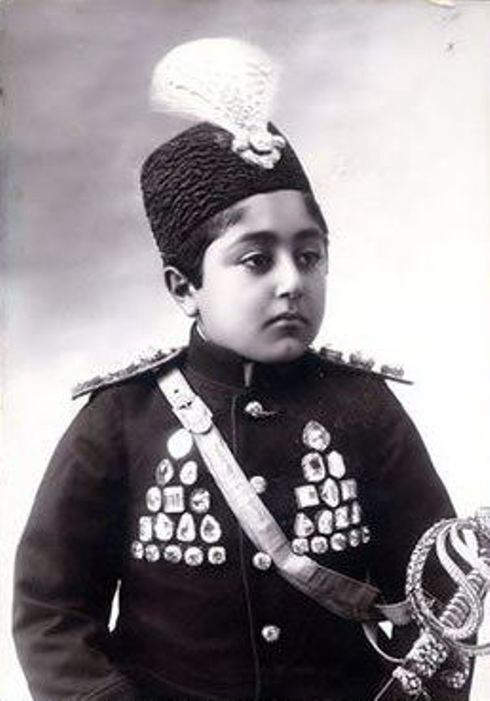 By the year 1920, the situation had deteriorated to such an extent that Sultan Ahmed Shah and his government had virtually lost all power beyond the capital Teheran. The Red Army along with rebels and warlords ruled much of the countryside. In this volatile situation, the economy of the country suffered a serious setback, and the country was heavily dependent on foreign loans for its survival. Moreover, under the Anglo-Persian agreement only a small fraction of the income generated by the Anglo-Persian Oil Company was credited to the Iranian Government account. 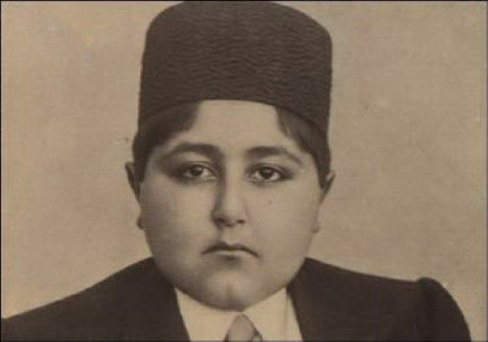 The dismal political and economic situation in the country paved the way for a military coup in which Sultan Ahmed Shah's government was deposed by his war minister and commander of the Cossack brigade Colonel Reza Khan, who installed himself as Prime Minister. Stripped of all his powers Ahmed Shah went into exile with his family in 1923, and was formally deposed on October 31, 1925, when Reza Khan was proclaimed Shah, taking the title Reza Shah Pahlavi. 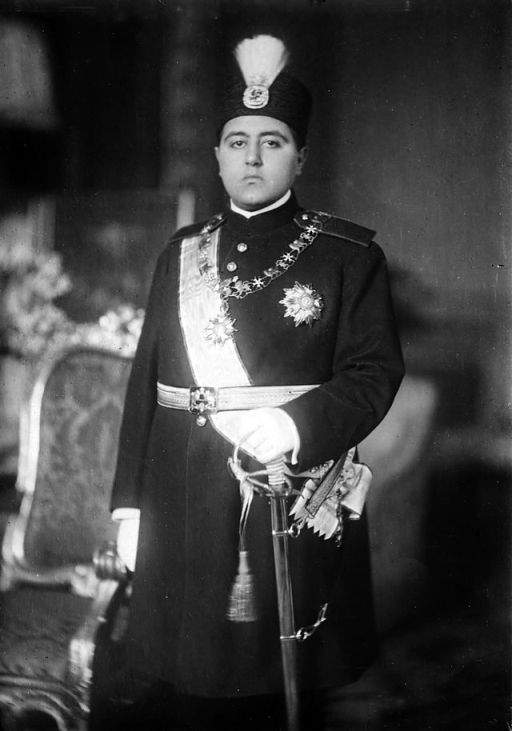 Sultan Ahmed Shah Qajar at the age of 16 years during his accession to the throne. He is wearing the fancy yellow diamond brooch as a hat ornament.

When Mohammed Ali Shah took refuge in the Russian Legation in Teheran in July 1909, he carried with him the Darya-i-Nur and other valuable items from the Iranian Crown Jewels, and claimed that the jewels were his personal property. However, after representations made to the Russian Government by the peoples representatives, the Iranian Crown Jewels were returned back to Iran. Sultan Ahmed Shah Qajar is seen wearing the Darya-i-Nur brooch as a hat ornament in an official portrait of the Shah taken after he formally ascended the throne in 1914. 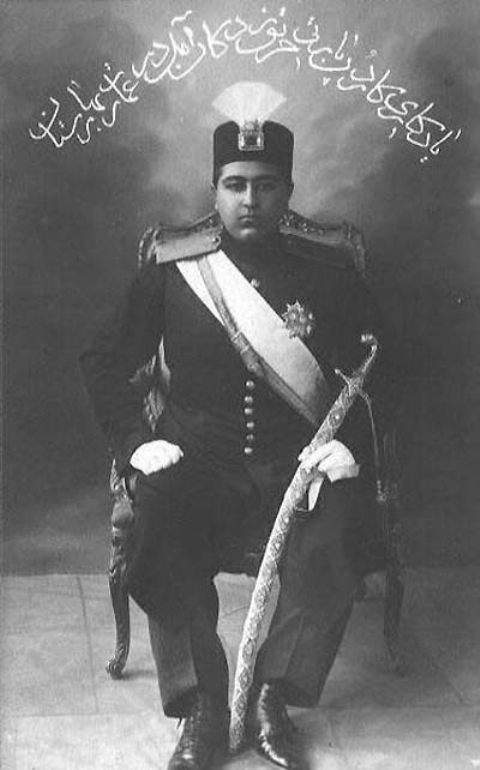 Official Portrait of Sultan Ahmed Shah Qajar. He is wearing the Darya-i-Nur diamond brooch as a hat ornament.

After Ahmed Shah Qajar was formally deposed in 1925, and Colonel Reza Khan ascended the throne as Reza Shah Pahlavi, he had been photographed wearing the Darya-i-Nur brooch as a hat ornament 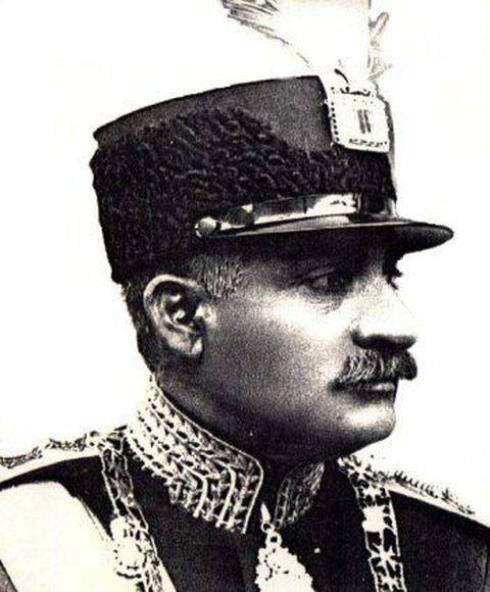 Hence, this shows beyond any doubt that the Dary-i-Nur Brooch is part of the Iranian Crown Jewels. This was precisely the reason why the Dary-i-Nur remained in the Iranian treasury, and Reza Shah Pahlavi was able to wear it after he assumed office as the Shah of Iran. On the contrary, the fancy yellow diamond brooch which Ahmed Shah Qajar was seen wearing as a hat ornament at the time of his accession to the throne, was his personal property, and hence was allowed to carry it along with him when he went into exile with his family in 1923.

Sultan Ahmed Shah Qajar lived in exile in Paris. He married five times and had four children by these marriages - three girls and one boy - all of whom were born before he went into exile in France. He lived in exile in Neuilly-sur-Seine, Paris for a period of 9 years and died on February 21, 1930, aged 32 years. Before his death he bequeathed the fancy yellow diamond brooch to his grandchildren.

Ahmed Shah Qajar fancy yellow diamond brooch is put up for auction by its anonymous owner at Sotheby's Geneva on May 14, 2013 and realizes a price of US$3,194,000.

The Ahmed Shah Qajar fancy yellow diamond brooch was put up for auction by its anonymous owner, at Sotheby's Geneva Magnificent Jewels and Noble Jewels Sale held on May 14, 2013. A pre-sale estimate of US$1,460,000 to US$1,880,000 was placed on this historic piece of jewelry with royal provenance. The lot sold much above the estimate for US$3,194,000 which was twice the lower estimate and 1.7 times the upper estimate. The enhanced price realized was no doubt due to historic and royal provenance associated with the diamond.