The name suggests a possible linkage with the ruling families of Morocco, the Sultans, who might have been in possession of this rare and valuable diamond probably before the mid 19th century, but there seems to be a lack of information to pin-point the exact ruler and the period. In fact there is no information to suggest that the stone had ever been with any one of the Sultans of Morocco. But one thing is certain. The diamond came into the possession of the Yousupov family, a Russian noble family of Tartari descent, in 1840.

The diamond is a 35.27-carat, cushion-cut, fancy grayish blue stone of unknown clarity. It is a rare type 11b diamond and perhaps the 4th largest natural blue diamond in the world. 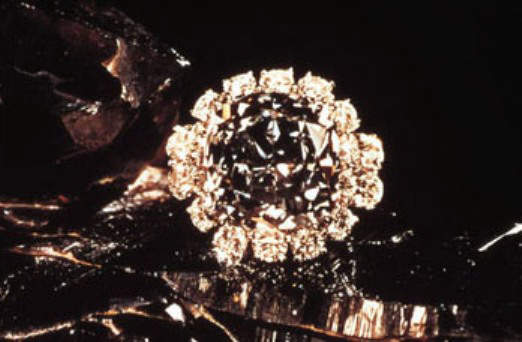 The country of origin, mine of origin etc. of the diamond are not known. The earliest known information about the diamond is that it came into the possession of the Yousupov family of Russia in 1840, during the time of Prince Nikolai Borisovich Yousupov (1827-1891). The Prince who was a patron of the arts and a collector of art woks, artifacts, and jewelry, purchased the diamond during one of his frequent visits to Europe. But details of the purchase such as the country or city where the purchase was done, the previous owner of the diamond, the price of the purchase etc. are conspicuously lacking.

Being a diamond of the pre mid-19th century, we can safely predict the source of the diamond, as around this time the only known source of blue diamonds in the world was the Kollur mines of Golconda, in Southern India. As such the Sultan of Morocco diamond seems to be of Indian origin.

The diamond had been with the Yousupov family for 82 years up to 1922, when it was sold by Prince Felix Yousupov- the last Yousupov prince and the most famous of all Yousupovs, who was directly involved in the murder of the mad monk Rasputin- to Cartier's of New York. The Yousupov family were a Russian noble family, descended from the Crimean Tartars. According to traditional family history, the earliest ancestors of Yousupov migrated from Arabia to the Crimean region, and were descendants of the 4th Caliph of Islam, Ali bin Abu Ta'lib, a cousin of the Holy Prophet Muhammad, the founder of the religion of Islam. Termess a descendent of Ali, migrated and re-settled in the shores of Azov and Caspian Sea in the 10th century A.D. In the 14th century , Edigu, who was one of Tamerlane's greatest generals, a Crimean Tartar from the Manghit Tribe, and a descendent of Termess , settled on the south shores of the Black Sea, establishing the Nogai Horde, from whom the Crimean Khanate, descended. In the 15th century Khan Yusuf became the head of the Norgai Horde. Khan Yusuf allied himself with Czar Ivan the Terrible, but eventually the former allies became enemies. Ivan later attacked Kazan, and the Queen of Kazan, Sumbecca, the daughter of Khan Yusuf was captured and taken to Moscow as prisoner. In the 17th century, Abdul Mirza, a descendant of Khan Yusuf, converted to Orthodox Christianity, under the name of Dimitry, and was bestowed with the title of Prince Yousupov by Czar Feodor I. Prince Dmitry Yousupov had two children. The eldest, Prince Matvei Dmitrievich Yousupov died young. The second son Prince Knyazhevo Dmitrievich Yousupov  married twice and had a son by the name Prince Grigori Dmitrievich Yousupov (Nov. 17,1676 - Sep 21, 1730), who was the General in Chief and Minister of Defense, under Peter the Great, and helped him with the construction of the Russian Navy.

Prince Grigori was married to Anna Nikitichna Akinfova (died 1735), and had four children. One of the children Prince Boris Grigorievich Yousupov, became Senator Chamberlain in 1730 and Governor General of Moscow in 1738. Prince Boris was sent to study with the French Navy at the age of 20, and later became advisor to the Czar, and served three sovereigns. During the reign of Empress Elizabeth he was appointed head of Imperial schools. Prince Boris married Irina Mikhailovna Zinovyeve and had one son and four daughters. The eldest son of prince Boris, was Prince Nikolai Borisovich Yousupov, who was Senator, Minister of State Properties and Director of Imperial Theatres, and was a keen traveler who spoke five languages, and a Patron of the Arts. Nicholas served under three sovereigns including Catherine the Great, Paul I, and Alexander I, as a private councilor and diplomat. In his travels through Europe he met sovereigns of France, Prussia, and Austria. He had also met Napoleon I on several occasions. In 1793 he married Tatiana Vasillieva (1769-1841). The couple lived in the luxurious palace of Arkhangelskoye in Moscow. Nicholas died at the age of 80 in 1831, and was succeeded by his second and only remaining son Prince Boris.

Prince Boris Nikolaievich Yusupov (1794-1849) was Marshal of the Imperial Courts and at the age of 42 inherited his immense family wealth, including more than 675,000 acres of land. He was primarily a businessman and not a patron of the Arts like his father. He moved to the Moika Palace in St. Petersburg which is also known as the Yousupov Palace, with his second wife Zinaida Ivanova Narishkina (1810-1893). Boris focused on the family granaries and developed a good relationship with the peasants who worked in them. Prince Boris died in 1849.

Prince Boris' only son Prince Nikolai Borisovich Yousupov (1827-1891), Marshal of the Imperial Courts, was also a patron of the Arts, like his uncle Czar Nicholas I. Prince Nikolai Borisovich Yousupov, bought a large collection of jewelry, which included the 35.27-carat Sultan of Morocco diamond. The Prince was later forced to spend much of his time in southern Europe, due to ill health and served as the Czar's diplomat during this period. While in Europe he bought a lot of paintings, other works of art and also a collection of violins, to adorn his Moika Palace. He married countess Tatiana Alexandovna (1828-1875). The Prince was also a talented musician and composer. and in 1866 published a book about the history of the Yousupov family. Prince Nicholai Yousupov II died in 1891 and was succeeded by his daughter Zinaida, who was considered a legendary beauty. Princes Zinaida NIkolaievna Yousupova (1861-1939) married Count Felix Felixovich Sumarokov (1856-1928), Governor General of Moscow (1914-1915). After the death of Prince Nikolai Borisovich Yousupov in 1891, Felix was granted special permission by Czar Alexander III, to carry the title of Prince Yousupov, Prince Felix was commandant of the Guards Cavalry of the Imperial Guards and was appointed Governor General of Moscow in 1914. At the beginning of world war I, the Yousupov family owned more than 100,000 acres of land and several industries such as sugar beet factories, brick plants, saw mills, textile and cardboard factories, mines and distilleries, in addition to 16 palaces and estates.

Zinaida had two sons, Nikolai Felixovich Yousupov and Felix Felixovich Yousoupov. The eldest son Nikolai Felixovich died young at the age of 26, and the second son, succeeded his father as Prince Felix Yousupov II, who married Irina a grand-daughter of Czar Alexander III. Prince Felix Yousupov II, who was the last Yousupov prince, became the most famous of all the Yousupovs, as he was involved in the murder of the mentally deranged monk Rasputin, just before the Bolshevik Revolution of 1917.

Grigory Efimovich Rasputin was a peasant and a petty criminal, who eventually became a monk, and spent a lot of time in monasteries, doing monastic things, but never received holy orders . Prince Felix Yousupov II, in his memoirs the "Lost Splendor"portrays Rasputin as a fascinating , compelling character, given to great excesses, but also possessed of enormous powers. He wielded a frightful and prodigious power over Russia's royal family in the years preceding the Bolshevik Revolution.

Rasputin's strength and superhuman powers were exhibited at the time of his death. When Rasputin's aristocratic assassins led by Prince Felix Yousupov failed to kill him after he devoured a plateful of cyanide-laced cakes and several glasses of poisoned wine, they decided too finish him off by shooting him in the heart. But, though he fell and lay apparently dead, the monk managed to get up and crawl upstairs looking for his killers, who then shot him several more times, clubbed him and threw him into the half-frozen Neva, where he finally died as determined by the autopsy, of drowning.

After the murder of Rasputin, Prince Felix Yousoupov II, was exiled to Crimea, but returned to St. Petersburg in 1917, to find the city in massive disorder after the February Revolution. He took with him some of his most precious paintings, and the jewelry and in the autumn of 1917, left Russia for good to Paris.

The Sultan of Morocco was one of the jewels he had carried with him, when he left Russia and he sold it in 1922, to Cartier's of New York.

Prior to the 19th century, the world's only known source of blue diamonds was the Golconda mines of southern India. But, later the Premier Diamond Mines in southern Africa became the main source of these extremely rare diamonds.

The collection of 11 extremely rare, exceptional quality, blue diamonds, known as the De Beers Millennium collection, and displayed at the London Millennium Dome, throughout the year 2000, were all sourced from the famous Premier Diamond Mines of South Africa.

Last transaction and the present owner of the diamond

After the sale of the diamond by Prince Felix Yousupov in 1922 to Cartier's of New York, the next occasion we here about the diamond is in 1972, when the diamond was sold privately to an anonymous buyer in San Francisco, California. Clarke G Wolfe an employee of the famous jeweler Laykin et cie, based in Los Angeles, California, had reported in December 2004, that between the year 1969 to 1974, when he was employed at this jewelry firm, he carried the diamond by air to San Francisco, and had delivered it to the V.P. of the company "Bud"Ehresman. This was for a possible sale to a private collector at the time. The price paid for the diamond was said to be $250,000.

List of famous and notable blue diamonds in the world

Diamonds are divided into two types depending on the presence or absence of detectable quantities of Nitrogen in the diamond crystal.

Type 11- Do not contain detectable quantities of Nitrogen- 1-2 % of all natural diamonds.

Type 11a - Do not contain detectable Nitrogen and absolutely colorless. I-2 % of all natural diamonds. Sometimes due to plastic deformation of the crystals can show a variety of colors such as pink, red, purple, orange, and brown, but their occurrence is less than 0.1 %.

Type 11b - Do not contain detectable Nitrogen, but instead contain trace amounts of Boron, which impart a blue color to the diamonds. Their occurrence is less than 0.1 % .

Colorless diamonds can sometimes show a bluish tint, which may become a little intense when viewed in daylight rich in UV-rays. This effect is caused by fluorescence and should not be mistaken for true Type 11b diamonds. eg:- The Regent diamond, the Portuguese diamond, and the Queen of Holland diamond.