The name refers to an exceptionally beautiful four-row natural pearl and diamond necklace, of unknown provenance, comprising of graduated natural pearls separated by diamond rondelle spacers, whose centerpiece is a vertical row of four graduated spherical pearls, with vari-cut diamond surrounds, from which a large button-shaped pearl, also with a diamond surround is suspended.

The necklace appeared at Christie's Contemporary Jewelry and Watches Sale, No. 7664, held on April 29, 2008, at Jumeirah Emirates Towers Hotel, Dubai, United Arab Emirates, where after a keenly contested bid, was sold for a whopping USD 1,743, 400 within the pre-sale estimated range of USD 1,800,000 to USD 2,200,000. The price realized was in keeping with the strong auction demand for natural pearls registered with the turn of the millennium, a trend that still seems to be going very strong. 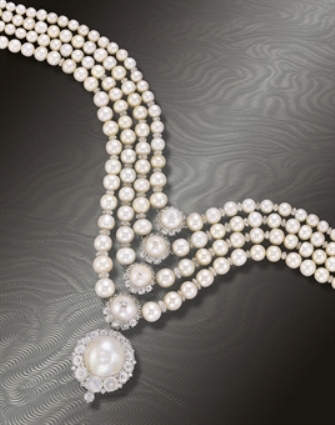 Characteristics of the four-row natural pearl and diamond necklace

The number, size and arrangement of pearls in the necklace

The number of pearls on each of the strands from the lower to the upper strands are respectively 59, 57, 51, and 51, inclusive of the central pearl, that forms the centerpiece of the necklace. Thus the total number of natural pearls in the necklace are 59 + 57 + 51 + 51, plus the single large pearl suspended from the center, giving a total of 219 pearls. The size of the pearls in the necklace vary from 4.7 mm to 10.6 mm. The size of the pearls gradually decrease from the centerpiece towards the clasp. The largest four pearls are incorporated as the centerpiece, and each of the rows begins from this centerpiece. The four pearls of the centerpiece are surrounded by vari-cut diamonds. In each of these diamond surrounds, the larger diamonds are situated on the lower side of the central pearls, and smaller diamonds on the upper side. Due to this arrangement the diamond surrounds appear to be crescent shaped.

The use of diamond rondelle spacers in the necklace

An important feature in this necklace is the use of diamond rondelle spacers, between individual pearls, separating them from one another. These spacers are placed in every row of the necklace, except at the points where the rows originate from the centerpiece. Some of these diamond rondelle spacers seem to have fallen off the necklace at a few points, perhaps indicating its antiquity.

The shape of the pearls in the necklace

Apart from the suspended pearl which is button-shaped, other pearls in the necklace are said to be graduated pearls. At a glance these pearls appear to be spherical; however closer examination of these pearls reveal that not all of them are perfectly spherical, but there are also near-spherical and button-shaped pearls among them. This can be clearly seen when the photograph is zoomed to increase the size of the pearls. The fact that these pearls are not all spherical in shape, seem to agree with their natural provenance. Unlike cultured pearls, matching for size and shape in natural pearls is an extremely difficult task, due to the multitude of shapes in which they occur, including the commonly found baroque shapes. Thus an unlimited supply of natural pearls will be needed to put together a necklace such as this, that matches both in size and shape.

The color and overtones of the pearls in the necklace

The luster and orient of the pearls

Luster or brilliance of a pearl is a reflective quality, caused by the reflection of light from the surface and just below the surface of a pearl. An examination of these pearls show that their luster and brilliance is exceptional in keeping with their saltwater origins. The orient of a pearl is caused by refraction, when white light is scattered into its constituent colors as it passes through successive layers of aragonite. Both luster and orient of pearls, like overtone colors, depend on the thickness of the nacre, which is maximum for natural pearls, being made entirely of nacre.

History of the four-row natural pearl and diamond necklace

Can the Persian Gulf or the Gulf of Mannar in Sri Lanka be the source of the pearls in this necklace ?

From the range of size, color and overtones of the pearls in the necklace, we can predict the saltwater oyster species in which the pearls were produced, and from the geographic range of this oyster, predict the source of the pearls.  The pearls vary in size from 4.7 mm to 10.6 mm. They are white in color with pinkish overtones. This is consistent with pearls produced by the saltwater oyster species Pinctada radiata, the most prolific pearl producer since ancient times, and the source of the first pearls known to mankind, whose natural habitat was the Persian Gulf, the Red Sea and the Gulf of Mannar. The species also produced large quantities of seed pearls. The common colors of pearls produced by this species are white and yellow, with overtones of silver, pink and cream. Ceylon pearls from the Gulf of Mannar, were renowned for their desirable white body color, with silver and pink overtones, producing silvery-white and pinkish white pearls. Pearls with yellow and golden hues were rare among Ceylon pearls. Among the Persian Gulf pearls too silvery-white and pinkish-white pearls were found, but pearls with yellowish hues were more common. Thus, the source of the pearls in this necklace could be the former traditional source of pearls in the world, either the Persian Gulf or Ceylon (Sri Lanka).

Can Venezuela be the source of the pearls in the necklace?

Pinctada radiata is closely related to the Atlantic pearl oyster species, Pinctada imbricata. In fact it is now believed that both belong to one and the same species, with minor regional variations. Thus Pinctada radiata is believed to be synonymous with Pinctada imbricata. The Atlantic pearl oyster on which the pearl industry of Venezuela was based in the 16th and 17th centuries, before the industry was abandoned due to depletion of resources, also produced pearls of the range 4 mm to 10 mm, apart from seed pearls. These pearl oysters also produced white and yellow pearls with pink, silver and cream overtones. Thus the pinkish-white pearls in this necklace could also have originated in Venezuela in the 16th or 17th centuries.

Vari-cut diamonds are used in the diamond surrounds of the central pearls of the necklace including the suspended pearl. The diamond cuts include a variety of cuts such as rose-cut, old-mine cut, and old-European cut. Modern brilliant cut diamonds are not among them. Perhaps, this may give an indication as to the period when the necklace was put together. The rose-cut was introduced in the 1500s, old-mine cut in the 1700s, and the old-European cut in the 1800s. However, these cuts survived up to the early 20th-century, until the introduction of the modern brilliant-cut by Marcel Tolkowsky in 1919. Thus, the possible period of the designing of the necklace is the 19th-century, when all the three diamond cuts mentioned above existed together.

Significance of the use of diamond rondelle spacers in the necklace

Rondelle - A Rondelle is a diamond disk that has faceted edges. The discs being somewhat flat, are generally cut from rough diamonds that are usually flat initially. These are mostly used as spacers between colored stones, and pearls. These flattened disks come in the range of 2mm to 6mm. The diamond rondelles like diamond beads are drilled to make a passage for the thread. Such diamond rondelle spacers came into use in necklaces only after the production of diamond drilling machines, in the 20th-century. Thus, in all probability the diamond rondelle spacers were actually a later addition to the 19th-century necklace.

At the Christie's auction held in Dubai, on April 29, 2008, the four-row natural pearl and diamond necklace, that appeared under Lot No.178, was accompanied by a lab report bearing No. 07-G-0112, dated May 14, 2007, issued by the Gemological Technology Laboratory, Geneva, which authenticated the natural provenance of the pearls.

The historical provenance of the superb four-row natural pearl and diamond necklace is not known. Yet, based purely on the antique features of the necklace, and the quality of the natural saltwater pearls incorporated in the necklace, with their exceptional color, overtones, luster, orient, and the shape and size range of the pearls, whose natural authenticity was supported by a laboratory report from a reputed gemological laboratory in Geneva, a pre-sale estimate of $1.8 million to 2.2 million was placed on the necklace. The natural pearl enthusiasts of the Middle East, who had assembled for the auction, were well convinced of the high value placed for the necklace, and hence the keen bidding that followed to acquire it, which was eventually sold for $1,743,400, still within the estimated range. This was the highest bid realized for a piece of pearl jewelry at the auctions, out of the 15 lots of pearl jewelry at stake. See table below.

The second highest bid realized by a piece of pearl jewelry at the auctions was the Umm Kulthum's nine-row satlada type pearl necklace, that was gifted to her by the late ruler of the United Arab Emirates, His Highness Sheik Zayed Bin Sultan Al Nahyan, in the early 1970s. The necklace realized a staggering $1,385,000, after a keenly fought bid for its possession. This was nearly 12 times higher than the upper pre-sale estimate of $120,000. The unprecedented demand for the necklace was no doubt associated with its historical provenance, once owned by the greatest and most popular singer the Arab World had ever produced. Thus, historical provenance plays an important part in determining the value of an antique piece of jewelry. If, the superb four-row natural pearl and diamond necklace had a historical provenance associated with it, its final value would have been more than double or treble the value realized at the auction. The Baroda Pearl necklace made up of only two rows of 68 high-quality pearls, with a strong historical provenance, holds the world record price set for an antique natural pearl necklace, at an auction, which is $7,096,000. This record was set in April 2007.

Out of the 15 lots of pearl jewelry sold at the auctions, 7 lots realized prices in excess of the upper pre-sale estimates. This is an indication of the strong auction market for natural pearls and jewelry incorporating such pearls, a trend that began with the new millennium about to be inaugurated, with the sale of the Barbara Hutton Pearl Necklace in November 1999 for $1,470,000.