This unique and extremely rare diamond appears to have been named to highlight the extreme rarity of it's color. The purple diamond is the rarest of all fancy colored diamonds. In fact in our long list of famous diamonds, we have come across only one purple diamond before, viz. the 7.34-carat "Royal Purple Heart." 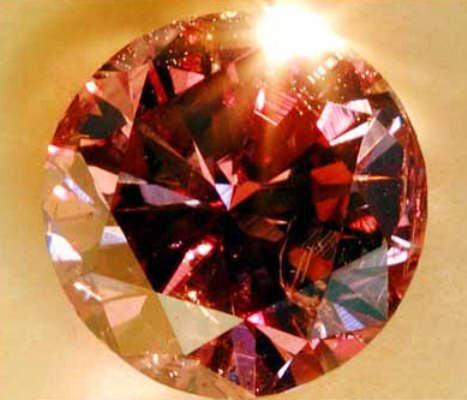 The diamond is a round brilliant-cut, deep purple, stone weighing 2 to 5 carats. The exact weight of the stone, color and clarity grades have not been revealed, but by all accounts this rare diamond appears to be unique for more than one reason. While at one angle the diamond appears to have a deep purple color, the color changes to a crimson when it is slowly rotated in the light. Some authorities have characterized this diamond as a color- change diamond, the first of it's kind discovered in the world. But, the validity of such a characterization is questionable, as in other color-change gemstones like Alexandrites, the term is applied to color changes occurring in two different sources of light, normal daylight and artificial light.

The diamond therefore appears to have a combination of two of the rarest colors in fancy colored diamonds, viz. purple and crimson (deep red). The colors are quite deep and vivid. The "Supreme Purple Star"diamond can therefore be characterized as the "rarest of the rare"colored diamonds in the world.

Being a relatively new discovery, the diamond does not have much of a history associated with it, but it is hoped that this rare and unique stone will build up it's own myths and legends as it passes down the lane of posterity.

According to British press reports , the rare diamond surfaced in London, in the year 2002. Until then the anonymous owner of the diamond perhaps, was not aware that the gem was a diamond and that too a very rare category of diamond indeed ! Only when he decided to take the stone for valuation, was it revealed that the stone was an extremely rare specimen of a fancy purple diamond.

It is difficult to believe that such a rare diamond could have remained undiscovered for the last 25 years, after it was cut and polished into a finished gem. Any experienced cutter would have identified the stone as as a diamond, while in the process of cutting , given the hardness of the diamond, and the special difficulties that have to be surmounted in the cutting and polishing of a diamond. Even if the stone had been identified and processed as a diamond, any experienced cutter would have known the rarity and the valuation of such a rare stone. The fact that the stone has been cut as a round brilliant, the commonest cut employed for diamonds indicates that the cutter had prior knowledge that the gem was a diamond.

Be that as it may, it is reported that the owner of the stone wants to get it graded by a renowned laboratory, with a view of disposing of it in the near future.

In the case of the "Supreme Purple Star"diamond the rarity of the color, combined with the color changing property and the deep and vivid colors could make it one of the most expensive diamonds on a per carat basis.

the 0.95-carat "Hancock Red"diamond set a world record in terms of pricing in 1987 and was sold for U.S. $ 880,000, which works out to U.S. $ 926,315 per carat. The 'Supreme Purple Star"has the potential, to break this 20-year old world record, and earn the rare distinction of being the world's most expensive diamond on a per-carat basis. The owners of the diamond are hoping that it will fetch about $ 4 million per carat.

Yellow and brown are the commonest colors in diamonds. Blue, green, and pink are rare, but the rarest colors are red and purple.

Color in diamonds are caused in three possible ways :-

(1) Incorporation of impurities in the crystal structure.

(2) Plastic deformation of the crystal structure.

(1) Incorporation of impurities in the crystal structure:-

Diamond is a crystalline form of Carbon. If the diamond crystal is pure and perfect consisting of carbon atoms only without any impurities, the diamond is absolutely colorless. Only 1-2 % of all natural diamonds are of this exceptional quality. The common impurity in diamonds is Nitrogen (less than 0.1 %) which imparts a yellow color to diamonds, if scattered in the crystal as single atoms or groups of 3-atoms (N3 centers). The yellow color can vary from a slight tinge to an intense yellow (canary). If Nitrogen atoms are scattered as groups of 2-atoms or 4-atoms the diamond remains colorless. 98 % of all naturally occurring diamonds contain Nitrogen atoms as aggregates. Only 0.1 % of diamonds contain Nitrogen atoms scattered as single atoms.

Some diamonds contain Boron as impurity instead of Nitrogen. However they are only 0.1 % of all naturally occurring diamonds. Boron imparts a blue color to diamonds. This explains the rarity of blue diamonds.

(2) Plastic deformation of the crystal structure:-

A perfectly formed crystal of diamond is an absolutely colorless crystal. But, such naturally formed perfect crystals are very rare. Diamonds are up to 3 or 4 billion years old. The crystallization of diamonds took place around 200 Kilometers below the surface of the earth, in it's mantle, and were later transported to the surface via Kimberlite and Lamproite pipes, which acted as conduits, from the earth's mantle to the continental crust. In the process of it's gradual movement towards the surface, which perhaps took millions of years, the diamond crystals were subjected to very high temperatures and pressures and the tetrahedral crystal units of some of the crystals underwent twisting and bending and were put under enormous strain. This is known as plastic deformation. Such deformed areas in the crystal can absorb light in different areas of the visible spectrum imparting different colors such as pink. red, purple, orange ,brown etc, and such colors are shown only if it happened in the rare 1-2 % of the Nitrogen free absolutely colorless diamonds. Hence the rarity of fancy colored diamonds. However in the Argyle mines in western Australia, which produce large quantities of brown diamonds most of them appear to be plastically deformed.

When the diamond crystal with or without Nitrogen impurities was exposed to prolonged natural irradiation for millions of years both during the formation of the crystal and after, it absorbed magenta wavelengths that imparted a green color to the diamond. Such naturally irradiated green diamonds are extremely rare, eg. the Dresden Green diamond.