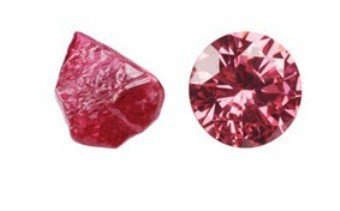 The "Lady in Red"diamond is a 0.54-carat, fancy intense purplish-red, round brilliant-cut diamond with a clarity grade of I-1 (imperfect eye-visible inclusions-1). The diameter of the diamond is 5.13 mm.

In the list of some known famous red diamonds the "Lady in Red"occupies the 7th position. 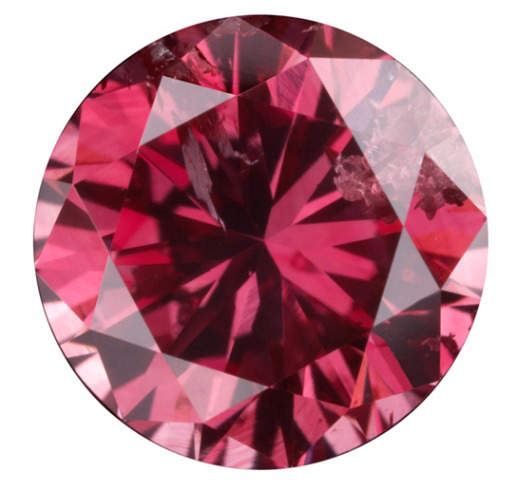 Red diamonds are usually structurally imperfect Type IIa diamonds, in which the red color is caused by plastic distortion of the crystal structure of the diamond either during its formation in the earth's mantle or subsequent rise to the earth's surface during volcanic eruptions. Type II diamonds are free of nitrogen or contain undetectable quantities of nitrogen. However, most of the diamonds produced in the Argyle diamond mines, including the pink and red diamonds contain detectable quantities of nitrogen, which are found as aggregates and are therefore Type Ia diamonds. The nitrogen content of pink and red diamonds is 10 - 100 ppm (parts per million), and they are found as A and B aggregates, which do not affect the color of the diamonds. However, plastic distortion in the crystal structure produces the pink and red colors. Therefore pink and red diamonds produced in the Aryle diamond mines are classified as Type Ia diamonds. 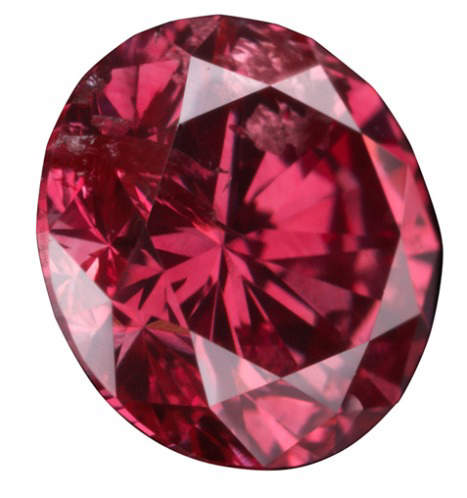 The diamond was one of 65 pink colored diamonds recovered from the Argyle diamond mines production for the year 2006. The diamonds intense purplish-red color separated it from the other 64 diamonds which were intense pink in color. The rough diamond weighed 1.46 carats, and was probably cut and polished by the highly trained craftsmen at the state-of-the-art diamond processing center at Perth, the capital of Western Australia, using advanced technology in the form of laser devices, automatic bruting, and computerized polishing equipment. After cutting and polishing the round brilliant-cut diamond had a weight of only 0.54 carats and a diameter of 5.13 mm.

The "Lady in Red"diamond came up for auction at the Argyle mines pink diamond tender for the year 2006 and was one of 65 diamonds that appeared at the auction. The diamond was purchased by a Brisbane jeweler Cameron Robinson, managing director of Bruce Robinson diamonds, but the purchase price of the diamond has not been revealed. According to Mr. Robinson the diamond is only one of seven such red diamonds ever found in the world. This seems to agree with our list of known red diamonds given above, but according to other sources there are around 20 diamonds in the world including the seven above that are certified as red. 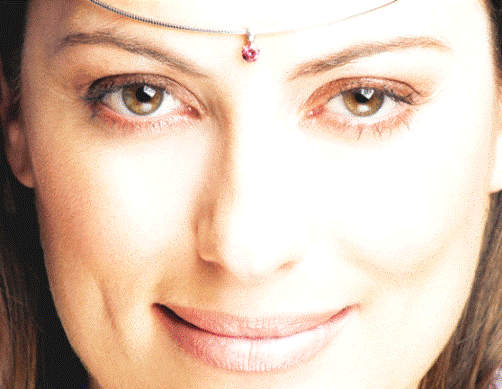 The Argyle diamond mines are situated in the remote north-east region of Western Australia, over 2,000 Km from Perth, the state capital. The diamond pipe in Argyle is not the usual Kimberlite pipe, but a Lamproite diamond pipe. The Argyle mine is the world's largest producer of diamonds by volume, but due to low proportion of gem-quality diamonds, in terms of value, Argyle is not the leading producer. The average annual production of diamonds is around 35 million carats (7,000 Kg), which is almost one-third of the world's annual production of natural diamonds. Out of this enormous production only 5 % is considered to be gem-quality, and of the remainder 55 % is industrial quality, and 40 % near gem-quality. In comparison, the percentage of gem-quality diamonds in the rough production of diamonds from mines around the world is about 20 %. Out of the 5 % gem-quality diamonds produced almost 80 % are brown, 16 % brownish yellow and yellow, 2 % white, 2 % grey and less than 1 % pink, red and green. Even in terms of size Argyle diamonds are quite small. Most of the diamonds produced are less than 1.0 carat in size. The largest diamond crystal discovered so far weighs only 42.6 carats, and was found in 1991.

The Argyle mine has ore processing and diamond sorting facilities on site. The company has introduced a state-of-the-art X-ray diamond sorting technique that could sort approximately 200 diamonds per second at peak sorting rates. The sorted rough diamonds are washed and shipped to Perth for further sorting. At first the diamonds are sorted mechanically according to size through a series of mechanical sieves. After sieving, the rough stones are sorted according to shape and color using sophisticated equipment. After the mechanical sorting is completed the final sorting is done by experienced human sorters who examine each stone carefully and sort them based on size, shape, color and clarity. The best quality gems that constitute less than 1 % of the production and appear mainly as pink diamonds and an occasional red or green diamond, is retained by Argyle, to be processed in their state-of-the-art processing center at Perth. A substantial proportion of the annual diamond production, especially the brown diamonds of smaller sizes are dispatched to the diamond cutting centers of India for processing, and are eventually transformed into champagne and cognac diamonds.

The Argyle mines in consultation with their Indian partners adopted a strategy to popularize their enormous production of brown diamonds. They produced jewelry of all types set with these brown diamonds, and marketed them as champagne and cognac diamonds. Within a short time the new range of brown diamond jewelry became very popular among consumers, and the demand is increasing. The marketing strategy was successful, and the economic viability of the Argyle mines had been ensured.

To market the mines high quality colored stone production, which was mainly pink, and constituted only about 1 % of the total production, the company adopted an entirely different strategy. They introduced a system of auctions known as "diamond tenders", that was held for specially invited clients. Every diamond tender was preceded by the distribution of a tender catalogue, and viewings were held at important diamond trading centers around the world, such as New York, London, Geneva, Hong Kong, Tokyo and Sydney. The average size of these polished pink diamonds were about 1.0 carat in size, and annually about 50 to 60 of these diamonds were sold. Occasionally a red or green diamond might also be included in these lots, but this is very scarce. This is because of the extreme rarity of these diamonds in nature. The "Lady in Red"diamond is one such scarce diamond that appeared at a diamond tender in the year 2006. Prices of over $ 100,000 have been achieved for the pink diamonds, and since 1985 more than 700 stones, with a total weight of 550 carats had been sold at these tenders.

All Argyle diamonds whether brown, yellow, colorless, grey, pink, red or green are Type Ia diamonds. This is because these diamonds have significant quantities of nitrogen varying from about 10 ppm to about 1000 ppm, in the form of A and B aggregates, which do not affect the color of diamonds. A great majority of the Agyle diamonds have undergone deformation of the crystal lattice, and the diamonds are highly strained and color zoned, parallel to{111}. The highly strained character is apparent when observed with cross polarizing filters. The plastic deformation causes the brown and pink coloration and other fancy colors like purple and red. The red color in the "Lady in Red diamond"is also caused by plastic deformation. Argyle brownish yellow and yellow diamonds however, contain N3 centers besides A and B aggregates, that impart the yellow color to the diamonds. Brownish yellow color is the combined effect of plastically deformed centers and N3 centers.