Characteristics of the Cultured Pearl and Diamond Bracelet

The bracelet having an inner circumference of 17 cm (6.7 inches), was designed by Van Cleef & Arpels, New York, in 1965. The bracelet set with five rows of cultured pearls is designed in the  bombé style, a jewelry designing style introduced in the 1940s and 1950s.  Bombé in French means "cambered," meaning a slightly arching upward curve or convexity, which simply means "curving or bulging outward." In respect of jewelry it refers to a dome-shaped setting often seen in rings and earrings from the 40s and 50s. For bangles and bracelets the term refers to an outwardly curving or bulging outer surface for such pieces, while the inner surface usually remains normal and straight. The design as applied to the cultured pearl and diamond bracelet under consideration, seems to conform to a large extent to the definition given above, with the outer surface of the bracelet curving outwards on all sides except the inner surface. 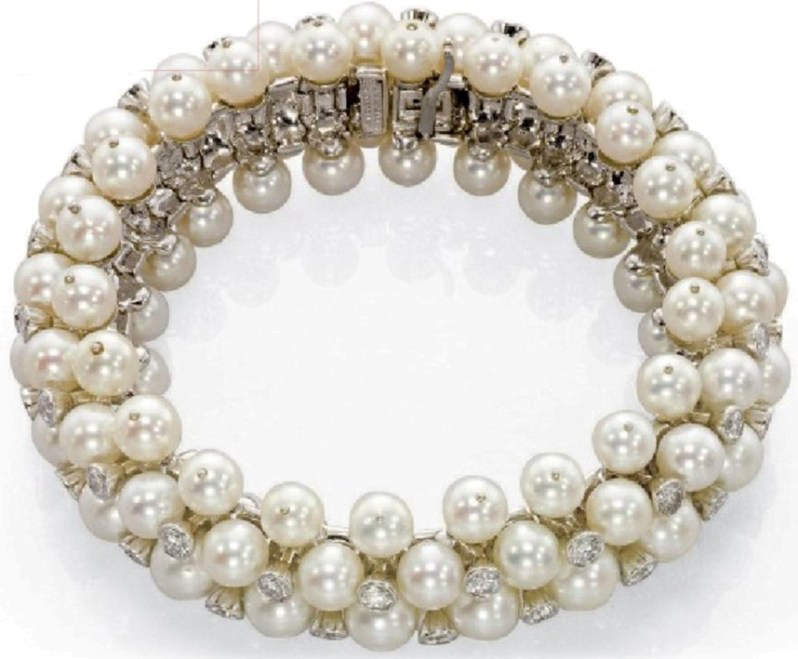 Design features of the bracelet

Characteristics of the cultured pearls

History of the Cultured Pearl and Diamond Bracelet

The bracelet was designed by the expert craftsmen of Van Cleef & Arpels, New York, in the year 1965. Around this time most of the saltwater cultured pearls in the international pearl markets, originated in Japan, and were known as Akoya pearls. Some cultured South Sea pearls from Australia's experimental farms may also have reached the markets during this period, but cultured South Sea pearls in large quantities appeared in the international markets only in the mid-1970s, after successful culturing techniques were developed by Nicholas Paspaley and his team of scientists and technicians. Thus, even though based on the size and color of the pearls, they could be either Akoya or South Sea cultured pearls, in terms of the availability of these pearls during the period the necklace was designed, it appears that the cultured pearls incorporated in the cultured pearl and diamond bracelet, are most probably Akoya cultured pearls originating in Japan.

Possible reasons for the enhanced price realized by the cultured pearl and diamond bracelet.

The cultured pearl and diamond bracelet, assigned lot no.205 and listed as "An Attractive Cultured Pearl And Diamond Bracelet, by Van Cleef & Arpels" came up for auction at the Christie's "Jewels : The Geneva Sale" on May 12, 2010, at the Geneva : Four Seasons Hotel des Bergues. A pre-sale estimate of CHF 65,000 to 85,000 (US$ 58,659 - 76,707) was placed on the bracelet. However, the price registered by the bracelet went beyond all expectations. The price realized was CHF 117,000 (US$ 105,604), which was US$ 28,897  more than the upper pre-sale estimate. The enhanced price realized by the bracelet, despite the fact that its main component was cultured pearls, was probably due to the high-quality of the pearls, coupled with the unique and exquisite design features. The collet-set, 66 brilliant-cut diamonds in the bracelet, would also have made a significant contribution to the its final price, as well as the renowned brand name of the designers, Van Cleef & Arpels.

The founding of the company in 1896, by Salomon Arpels and Alfred Van Cleef

Van Cleef & Arpels, the internationally renowned high-end jewelry and watch manufacturing firm, patronized by royal and imperial courts, financiers, industrial magnates, and celebrities, was founded in 1896, by Salomon Arpels, a precious stone dealer and his son-in-law Alfred Van Cleef, who had married Esther Arpels in the same year. The company opened its first boutique 10 years later, in 1906, at No.22, Place Vendome, the same year the company's trade mark was registered. The company prospered and was later joined by Esther's brothers, Salomon, Jules and Louis Arpels. New boutiques were opened in renowned holiday resorts, such as Monte Carlo, Nice, Le Touquet and Deauville. Alfred Van Cleef died in 1938, leaving behind his daughter, Renee Rachel Puissant. Eventually a second generation of the Arpels family was in control of the destinies of the company.

Emigration to America in 1942 and opening of the first boutique in 5th Avenue, New York

The Arpels family emigrated to America in 1942, where they opened their first boutique on 5th Avenue in New York. The company also became the first French Jewelers to open boutiques in Japan and China.

Van Cleef & Arpels is acquired by the Swiss based Compagnie Financiere Richemont S.A. in 1999

The company, that was under the control of the Arpels family for over a century, was finally acquired in 1999, by the Swiss luxury goods company, Compagnie Financiere Richemont S.A. the 3rd largest group of luxury goods companies in the world by turnover, with 16 fully owned subsidiaries which includes Van Cleef & Arpels. The range of products in which the different companies of the group specialize, include jewelry, watches, writing instruments, clothing and fashion accessories including perfumes. Van Cleef & Arpels still maintains its role as one of the leading players in the high-end jewelry market, preserving its tradition of turning out products of the highest quality, incorporating the finest materials and the best designs.

Milestone creations in the company's history

The company's history in jewelry creations, is marked by several milestone creations, such as the diamond, ruby and emerald bracelet, with a "red and white roses in bloom" motif, that won the first prize at the International Exposition of Modern Industrial and Decorative Arts, held in Paris in 1925. Other creations included the Minaudiere, a small precious box in 1930; the Cadenas (Padlock) wristwatch in 1936; the Passe Partout bracelet in 1939; the ultra slim round watch in 1949; the Zip necklace in 1950; the Alhambra necklace in 1968; etc. The company also became renowned for the use of its "mystery setting" of precious stones without visible claws.

5) Richemont - From Wikipedia, the free encyclopedia